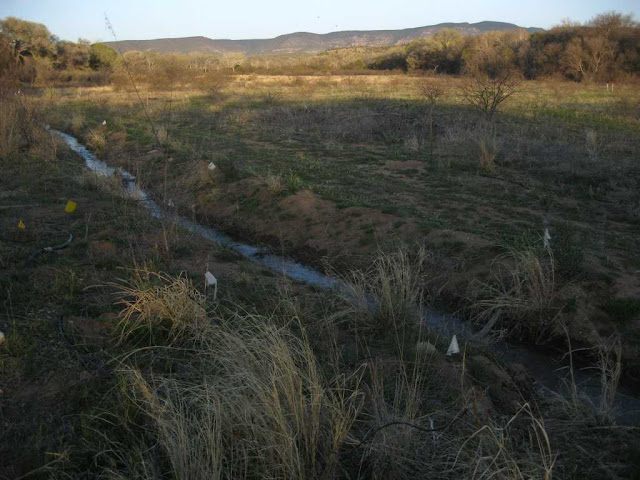 It doesn't take much to make us smile and be happy.  Likewise, it sure doesn't take much to make our day special.  Yesterday, we received a gift from our neighbor, the National Park Service.  They put water back into the irrigation ditch in front of our house.  YEA!  Frankly, it was a shock to see it there--almost like a mirage.  We stood staring at it like those cows you see standing in pastures while staring aimlessly at some unseen object.

It's been forever since there was water in this long dormant ditch.  Back in 1984 when we "discovered" this land here next to Montezuma Well, the little ditch was in use all the time.  The park has the water 8 days and then must let it go out of the park for 8 days.  So back in the 1980's this ditch ran for eight straight days during every irrigation rotation.  Back in those days, the field was bright green with nary a weed or stray mesquite to be seen.

This water, you see, is the outflow from Montezuma Well itself.  The Well's water came into use for agricultural purposes perhaps as long as 1,000 years ago.  It's well documented that the pre-historic people who lived here routed the Well's outflow through a complex system of irrigation ditches.  The ditch lateral you see in the photos here had been in continuous use at least since the 1870's when Wales Arnold homesteaded the place.

Long ago, perhaps in the 1970's, the park leased the pasture for $100 a year to a guy who lived in Chambers, Arizona. He was allowed to run 30 steers on the pasture each summer in return for keeping the pasture green and maintaining the fences.  The park looked the other way and let the guy hire an illegal Mexican who lived in a ramshackle travel trailer down in the cottonwoods and sycamores.  The Mexican couldn't speak a word of English and kept to himself.  The Mexican was a real irrigation genius and he kept that pasture so beautifully green.

Well, we messed it all up.  We decided we wanted to rent the pasture and insisted the park put the whole "good ol' boy" thing out for bid.  Rather than accede, the superintendent back then cancelled the lease with the guy in Chambers, kicked out the Mexican and let the pasture dry and die.  The field quickly reverted to a sea of tumbleweeds and encroaching mesquites.  It was very sad to see.

All these many more than 20-something years, we sure have missed seeing water run through this ditch.  It is a wonderful sight.  Well, by and by, the park decided to spend over a half-million dollars reverting the field into native plant species.  That's been an ongoing project for a few years and is too long a story to tell here.  Anyway, we always had a suspicion they would eventually run water back through this ditch.

What they are trying to do is make our house disappear.  No kidding.  They don't say it quite like that in their planning documents.  They say something like "establish a vegetation screen to reduce the visual impacts of encroaching urban development."  So, what that translates to is that they have planted all sorts of little trees out in front of our house that will someday become real big trees and do two things: A) Make it difficult for people on park property to see our house and B) Eliminate our view of The Mogollon Rim.

Well, whatever.  Anyway, running water back through this ditch is part of a plan to bring water to the roots of the growing trees which have been on a drip system for the past couple of years.  Two years ago, the park dug out the old ditch and ran water through it as a test.  Then they dried it up and left it. Yesterday was essentially the first time water has been run through the ditch since sometime in the late 1980's.

As we were writing this blog post this morning, we actually got up from the computer to walk out and see if the water was still running.  Yep, it is. It's so fun to see the sun sparkling on running water right in front of our house.  We're pretty sure the park plans to make more regular use of the ditch and that's a good thing.  As we said, it sure doesn't take much to bring a smile to our spirits and make our day. 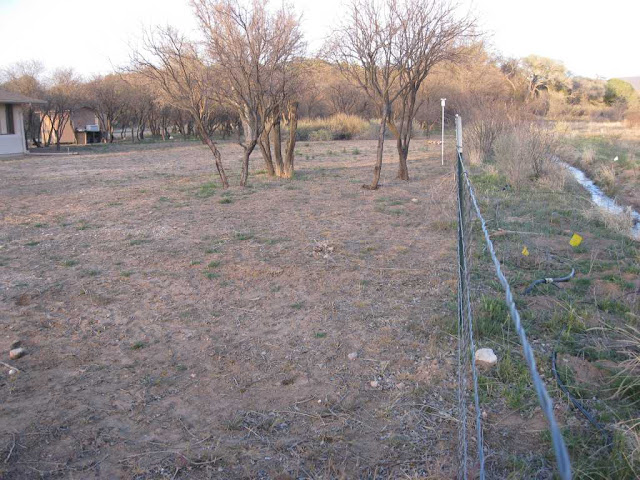 It's a bit ironic. And I never saw anyone walking around out there when I visited you this time last year. It's nice the ditch is back with water as it will help establish the native vegetation. If they want to keep out weeds, however, they probably should borrow some of Goatherders flock (gee, do goats flocks or do they congregate?) for weed control as opposed to herbicides. Your house blends in pretty well into the landscape.

I have spoken to the girls and their emasculated escort about this and they replied as follows:

"Please let this Spudboater human person know that WE do not eat weeds, thank you very much."

They are snotty sometimes those goats.

I like snotty goats even when they rub on me and try to kiss my nose. I can understand not liking weeds. Ice cream probably is much nicer. The spudboater sends an apology for impugning their good taste buds. Maybe they can just eat the NPS native plants instead:)

They are partial to Mesquite beans, but only those that are nicely dried without any mildew. Otherwise the poor dears get all burpy. My goodness.