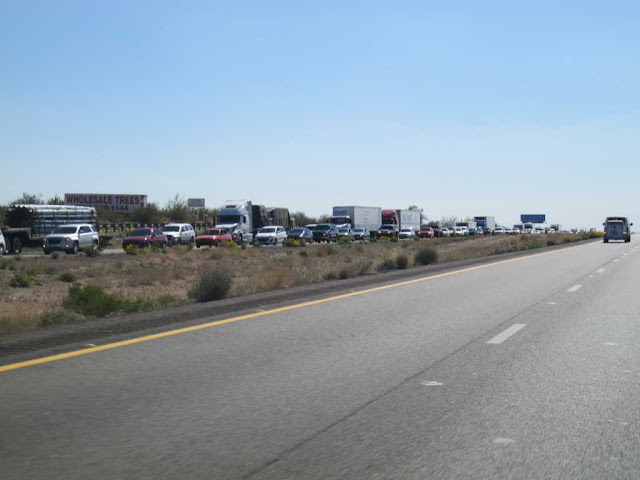 It had to happen sooner or later.  We've been reading about it for many years.  Luckily, it's always been the "other guy" who's marooned and not me, not us.  Today, it's me.  I am marooned in the Anthem Sea.  Anthem, you see, is a giant Del Webb development straddling I-17 at (where else?) Anthem Way.  Somewhere 13 miles up the road is the location of a bad accident.  I got caught in the northbound gridlock shortly after noon today.  Forty five minutes later, I had progressed three whole miles to the next exit at New River and dived off to retreat to a McDonald's restaurant in Anthem.  Since then I've been running various errands but am now out of errands to run.  Imagine that.  Meanwhile, teh gridlock has grown gargantuan and traffic stretches farther than the eye can see to the south in the northbound lanes.  The closure has been going on for hours now and I am marooned here.  I am at least 30-40 miles from Roger's Place in Mesa.  I spent last night there when my trip to Phoenix ran too long.  Guess I might have to go back again tonight.  YIKES!  I've never been marooned in the Phoenix metroplex before.  It is a very claustrophobic feeling.  There are two alternate routes to the Verde Valley but, at this point in the day, both of them are out of the question.  The safety of Roger's Place makes a whole lot more sense.  The photo that accompanies this post was taken after I was able to get back into the southbound lanes to return to Anthem.  Well, as we said, it happens now and then on this highway and perhaps it was only a matter of time until it happened to us.  Perhaps we will conjure something exceptionally good out of this situation.  Who knows?  The funny thing about being marooned here is that if I head back to Roger's, I will have to slog through Friday afternoon rush hour on the 101 and 202.  Yesterday it took me one full hours to get from Scottsdale to Mesa at the same time during the afternoon.  Today would be worst.  Fridays are notorious for gridlock on the freeways here.  So, perhaps I am marooned to both the north AND the south.  Now, that's a truly odd situation.  Well, we will let you know how it works out.  Have a great day & Many Cheers, jp
Posted by John Parsons at 3:56 PM