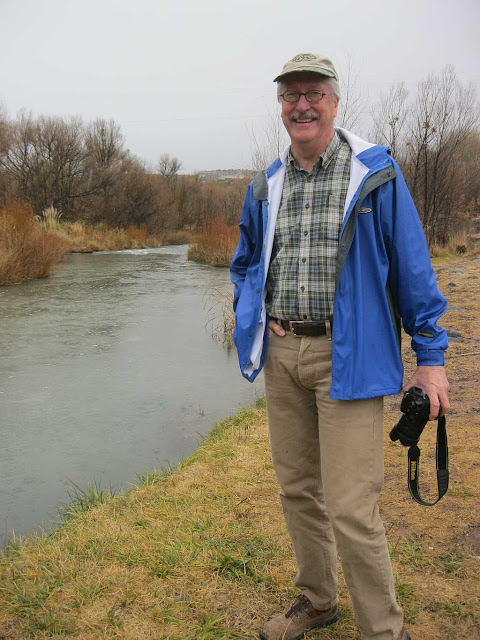 We're having a real low old time here--a big low pressure system is parked on top of us and isn't moving.  It's been raining steadily for almost 24 hours and the weather pooh-bahs say it's gonna rain for 36 more hours.  We've received an inch of water so far and up to another inch is possible before the long low leaves.
Most low pressure systems that visit these parts are in a hurry to harass people to our East.  They huff and puff and blow on through pretty pronto.  They are known as a "fast moving low."  We're not sure the weather wonks have a name for lows like this.  The wind speed is precisely zero and it has been zero since yesterday.  Yes, the low lingers long.  No Tuesday Target Shoot this morning.  No hike for Susun and Friends of Phyllis today.  We are pretty much confined to quarters here--call it Mother Nature's form of House Arrest.

Pitty Poor Dexter & Crew.  Yep, they are on the river.  It's a nine day trip.  That means they are sitting through almost three full days of rain.  Ouch.  It sends shivers through us just thinking of the deep damp wet cold they are "enjoying" at the moment.  Dexter is such a trooper.  Whatever award they gave him in November is a mere token to what he truly deserves for the tireless work he does.  Hang in there, Dex, home and hearth are only a few days away.

Yesterday, Susun helped Betty once again.  Betty needs to see her Doctor fairly often now so Susun will be there for Betty whenever the need arises.  Betty is a Dear Friend, of course, but she is as sweet a Dear Lady as one could ever hope to know in this lifetime.  We both love her so much.

The blog author hustled off to the Verde NRCD meeting yesterday.  We gave our Advisor report and then left at 10:15 am to go meet with Ace Reporter Steve Ayers.  Yes, that's him down by the riverside.  He wanted to take our photo for the story coming out tomorrow.  Naturally, it was raining at a pretty good clip.  We took off our hat and jacket and posed in a short-sleeve shirt, acting as if it was a Blue Bird Day.
Steve, on the other hand, is basically saying, "Take the picture, John, I'm getting wet, let's get out of here!"  He's a good sport, though, and it was a fun vignette.  The spot where he took the photo hold special meaning to me.  It is the same spot where I first set foot into the Verde River over 30 years ago.  A few years later, I videotaped Camp Verde's first Mayor Bob Barker there as he called for the place to be made into a park.  Well, it took another 20+ years but, long after Bob passed on, the place is an actual real park.

During the soggy afternoon, Gary brought over a Dillon RL550B progressive reloading press.  We spent the waning hours of the afternoon fitting and bolting the press down to a bench in my workshop.  Progressive presses are akin to Swiss watches.  So, imagine if someone showed up with a dis-assembled Swiss watch all jumbled up in various boxes.  Putting the press together is going to be like doing a jig saw puzzle or repairing a Swiss watch or both.

Well, we're ending the brief controversy over our earth oven project.  You may have noted we received some well-deserved criticism over both the design and heat source for the earth oven.  COnsequently, we're dropping the word "earth" from the project.  It is now a project we're calling POOF.  That acronym stands for "Propane Outdoor Oven Facility."  We had to add an "f" word because without it, the acronym would have been a tad bit naughty.  Anyway, earth will be nowhere to be found on this oven.  It's strictly firebricks and sheet metal.  We're not even putting any adobe block on top of it either.  It's just a POOF.  That should nip the controversy in the bud.  Oh,and yes, the POOF will be up and done and running well before the end of the year--provided it stops raining down here in the "dry and warm" winter we were supposed to have.

Spudboater posted to her blog yesterday--click here to read it.  Goatherder is ripping his kitchen stove out by its roots and we suspect there's a blog post in the making there.  Wayne Ranney put up a tremendous blog post two days ago.  It's about the South Pole.  Believe it or not, Wayne worked down there 25 years ago.  Yep, true story.  You can read all about it by clicking here.  And, yes, the photo of Wayne was taken "back in the day" at 90 degrees south latitude.  Finally, we you know, we are always inspired and rejuvenated by Kirsty's blog, Momedy.  She has a knack of putting together blog posts that truly bring a glow to our hearts and a smile to our faces.  Sometimes, I think that both Erma Bombeck AND Norman Rockwell are alive in Kirsty's Spirit.  reading Kirsty's blog any time of the year is a great experience but it's always really special and endearing during the Christmas Season.  Click here to see some of her favorite things about the Holiday Season.  Thanks, Spudboater, Wayne and Kirsty for really livening up a rainy Tuesday morning. 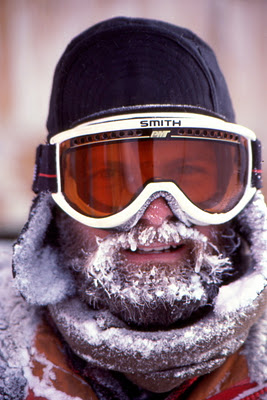 Thank you as always for the super kind words Clarence. You are truly a ray of sunlight in any climate :) I am still hoping that some Christmas miracle will bring you guys to our doorstep one of these fine days. You would make the perfect Santa :) Stay warm and dry!!