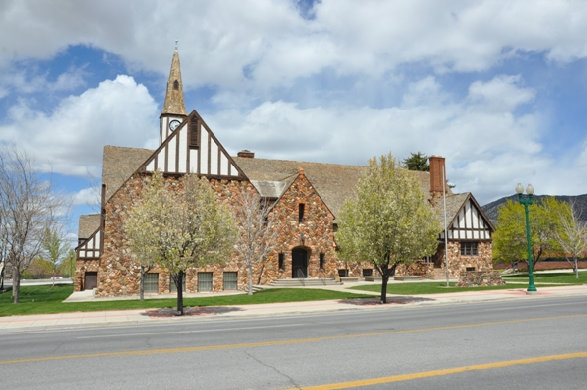 I'm going to start this post on 9/9/11 not long after 9 pm.  I wrote a long post on the main blog about 9/11 and then Susun called me to the kitchen to eat a late dinner.  As I walked into the kitchen the clock read 9:11 and I thought, gee, "All in A Day's Karma!"  So, I guess I have to start writing now.  It's not something I am looking forward to to.  Normally, writing is fun and, well, you know how fun goes.  But writing about the Real 9/11 can't possibly be qualified as fun.  However, I think it need to be said and done.  I think it's part of our American Psyche and we all need to express ourselves about this day of epiphany that will live forever.


We had been volunteering for the Dixie National Forest since May 21, 2001.  We were living in the Cowpuncher Guard Station on The Aquarius Plateau about 45 minutes north of Escalante, Utah, on the Pine Creek-Hell's Backbone Road.  We were doing a newsletter and website for The Upper Sevier River Community Watershed Project (USRCWP).  By late August 2001, we were the "toast of the town" and had published a highly-acclaimed newsletter showcasing various projects and people of the Upper Sevier.  Ultimately, we would receive a Utah State award for this newsletter.  We were at "the top of our game" that season.  We had carte blanche to "travel at will" to do whatever we felt was necessary for our project.  We didn't have to ask permission to go someplace--we just went there and did whatever we had to do.

So, using our carte blanche, we had made an appointment to go to the Dixie National Forest Supervisor's Office in Cedar City, Utah, to meet with the head GIS Specialist to made some GIS maps of the Upper Sevier River watershed that would be suitable to print in the second edition of the USRCWP newsletter.

We left our remote duty station on September 9th and drove the long 150 mile distance to Cedar City that day, arriving late to check into the Super 8 Motel alongside I-15.  Since we were the frugal type, we always tried to save the government money, buying the least expensive motel we could find.  Luckily, we have had enough occasion to travel to Cedar City that we knew the front desk staff of the Super 8 and they always put us up in their "best room."  The best room in a Motel 8 isn't particularly anything to write home about.  It's best attribute is that it is ground floor and close to the manager's position so that he/she can monitor unruly guests and modulate (or arrest) them.  We always appreciated this great favor and heaped lavish praise on the front desk people, even going to the point of writing letters of recommendation for them.  It was kind of a symbiotic relationship we had that summer at the Super 8 motel there in Cedar City. 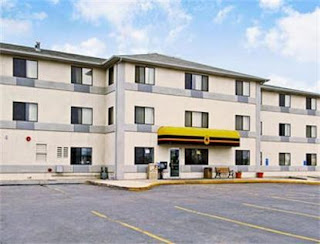 We checked into the Super 8 Motel 145 North 1550 West on the west side fo I-15 late in the afternoon of September 9th.  We spent the following day of September 10th preparing for our appointment the following day with the Forest Service GIS Specialist as well as tending to many other details of our volunteer duties.  We also made the Big Decision to buy a cell phone that day.  We had been talking about taking the leap and finally decided to go to a local Verizon outlet to sign on the dotted line and buy a real honest-to-gosh cell phone.  It was a Dear Diary Day for both of us.  We took the new cell phone to the Cedar City Park and sat a picnic table and tried to call various people in our address book.  Using a cell phone was a brand new experience for us and we hardly knew how to press the keys and select from the complex and confusing menus.  We had no luck in trying to call anyone except our Dear Friend Catherine Balzano who lived in Phoenix at the time.  We were so excited to actually talk to someone we knew on the cell phone we spent the evening sitting there at the picnic table chatting with CB (as she was known by her initials).  I will never forget that blissful evening sitting there in the Cedar City Park trying to make sense of our first cell phone.  Everything about the evening was so bucolic, so innocent, so peaceful.  I can almost still smell the air of that evening.

When I awoke the morning of September 11th, I will still wrapped up in the whole cell phone programming mode.  Meanwhile, Susun was watching TV as she is wont to do when a TV is nearby.  She called to me as I laid in the bed messing with the cell phone, "John, you need to come here right now."

I remember rising from the bed and walking toward the TV perched on the cheap chest of drawers in that Super 8 room, watching as smoke billowed from the strike on Tower One.  A narrator's voice from a helicopter droned on about some sort of internal explosion in the Tower.  We watched transfixed.  My interest in programming the new toy vaporized.  We both only had eyes for the smoke billowing from the tall tower as seen from a news video helicopter.

And then, as if by some sort of magical television transport, we watched the second jet fly into the second Tower.  Neither of us will ever forget seeing that tragical moment.  It is forever etched in the synapses of our brains.  In the nano-moments that ensued as the explosion seemed to billow in slow motion, I looked blankly at Susun and said, "Our World Will Never Be The Same."  I am pretty sure (99%) that those were my first words.  There are two other statements that could have been my first words.

The first was "We haven't seen the weirdest yet."

And the second could have been, "I am so glad my Dad died before he saw this."

It's really hard for me to remember what words I uttered first but I think the above three statements cover it pretty well.  I am positive I said the first statement within seconds of seeing the plane hit the second tower.

Within no more than a minute or two of seeing the second plane hit the tower I was scrambling for find a phone book and I frantically began trying to call the churches of Cedar City.  Of course, it was early of a weekday morning and no one was answering their phone.  I did reach a lonely priest at a Catholic Church and I pleaded with him to open his church immediately.  My plea fell on deaf ears.  I called the City of Cedar City and pleaded they lower their flag to half staff and all they said was, "Why should we do that?"  The reality of the moment hadn't hit the local populous and I felt like the Lone Ranger trying to rally people to recognize this momentous historic milestone.  Finally, I said to Susun, "We have to find a place to grieve and pray.  I have an idea."  I knew about the historic Rock Church of Cedar City.  It is an LDS icon in what's called Dixie, Utah.

Well, my intuition told me we could get into it.  Susun was very skeptical but I said, "This is going to work."  We sped through downtown Cedar City and jammed into a parking lot behind the old rock church.  I jumped out of the Samurai and ran straight toward an obscured back door.  I grabbed the handle and yanked and--lo and behold--the door was open.  Someone had forgotten to lock it.  The door opened into the basement of the historic structure and we ran through darkened hallways and climbed up shadowy staircases and darted here and there until we burst into the worship area of the old church.  Morning light streamed upon the pews and the ornate woodwork of the old place.  We went into the middle of the pews and kneeled down together and held hands and prayed out loud reciting the Lord's Prayer time after time again.  We prayed for the victims and we prayed for their families and we prayed for the rescuers, too.  We prayed for everyone.

Finally, we left that old church.  We saw no one there and no one saw us.  We drove back to the Super 8 subdued and humbled.  And then we got on the phone to the Forest Service.  We fully believed that they would send all their Staff home for the day but....NOOOO.   Everyone was at work and they hadn't even yet lowered their flag to half staff.  The GIS specialist seemed surprised when we asked if her duty would be canceled that day.  I will never forget the cold-hearted tone of her voice when she said, "This is just another day."  Yea, verily, just another day, eh?

We debated long and hard about whether we should go out to their office and "proceed on," as Lewis & Clark would have said. We both decided that it would be the "right & proper" thing to do to "proceed on," as they say.  So, we drove out to the Supervisor's Office, making due note of our odometer reading so we could claim our government mileage and then proceeded to spend the rest of the day in a windowless government cubicle environment.  One of the GIS Specialist's colleagues was violating government procedure by listening to a rogue TV set in his cubicle.  He kept calling out the milestones as they happened that fateful day.  The woman with whom we worked seemed oblivious to that strange, faceless voice echoing over the cubicles.  The faceless voice intoned, "Tower One has collapsed."  Susun and I and the GIS Specialist worked on as if nothing whatsoever was happening.  My heart ached so badly I could barely speak.  I looked into the eyes of the woman we worked with that day and there was no emotion.  She was simply doing her job.  Whether she felt any emotion, we will never know.
And so we worked on as the day progressed and the faceless voice in the other cubicle tolled, "Tower Two has collapsed."  And we worked on.  We finished the day with some very nice GIS maps.  They were very slick and spiffy.  I will never forget them.

We went back to the Super 8 and watched out our window as an entire apartment complex of students from South Utah University (SUU) emptied spontaneously in their parking lot to hold hands and begin praying out loud for the fallen.  I believe it was then that we finally held each other and began crying.

I can't help but think of the enduring icon of  SUU, that brave horse "Old Sorrel" whose strength and dedication made the difference between success and failure of SUU as an enduring institution.  The SUU Founders Memorial is one of the most imposing and emotion sculptures we have ever stood before to behold.  And when you know the actual story behind the sculpture, it becomes even more impressive.  On that fateful day, my thoughts turned to that horse and the men who helped it shape the destiny of a desert culture.  I thought, "We will be that horse, we will pull together into a brighter future.  We will find a way to prevail."

And so it is today.  In spite of our differences and our divergent goals, we all share one thing in common.  We are Americans and we are proud of our heritage and we stand united in our freedoms, ready to defend out rights and standing tall as we stride into a bright future. We shall prevail! May God Bless America and all of us always and all ways, 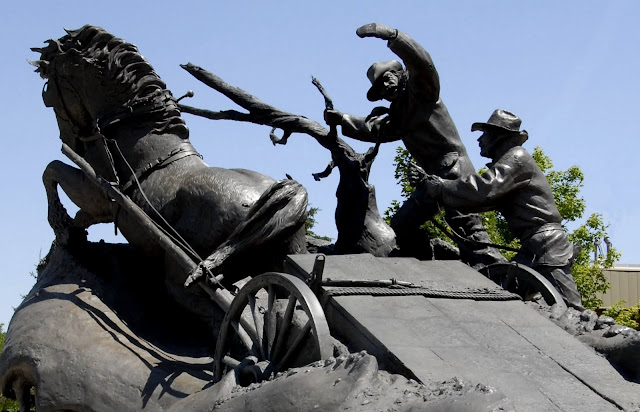