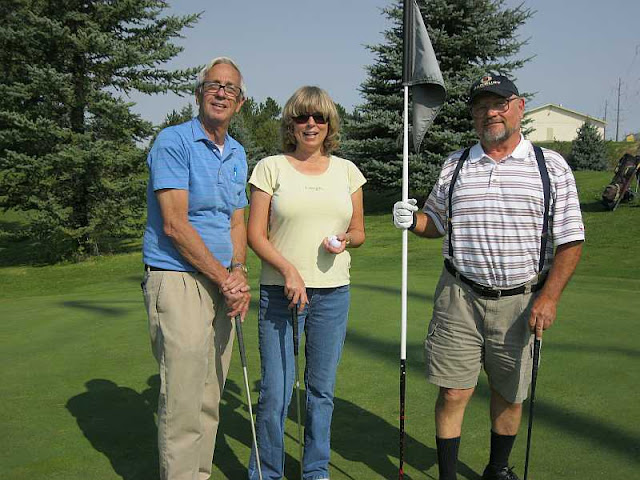 Back before the internet came along, the work links defined only a few limited things: sausages, chains and golf courses.  Now, of course, the internet's links can take you anywhere and young people probably don't even associate the word "links" with anything other than cyberspace.  Yesterday we "hit the links," as golfer like to say.  We had a great time.

Another word that's now almost totally associated with the internet is the word "hacker."  Well, the World of Golf was full of hackers long before the internet came around.  If we were playing on a real golf course, we'd probably cringe at being called hackers.  However, on the little short course, one can be a hacker with grace, style and, yes, even dignity and outright applause from their fellow hackers.   Since we don't keep score, we don't particularly care about how many hacks it takes to force the little white ball into the small, distance hole in the grass.  For us, it's the true fun of the game that matters, not the low score.  It's great to be able to be outside in the 60-something degree air enjoying the beauty of an early fall morning.  And it's fun visiting between ourselves, swapping stories, asking questions and learning new about the new adventures each of us has planned.  Each hacker had a few actual really nice shots.  That's the way it always is.  We all prefer to remember those fine strokes that sent the ball high in the air and kept it on course.  We'll always forget about all those other strokes.

Terry's busy with a book he's writing and Carrie's off to mess with Texas so we're rallying up Houn' Dawg to get back out on the links again.  We'll be meeting him today at the Pinecrest chipping range so he can tune his short game before tackling the kiddie links.  This early autumn weather is superb.

THANKS for a Great Game, Terry, Carrie & Susun!  Many Cheers, jp
Posted by John Parsons at 7:02 AM