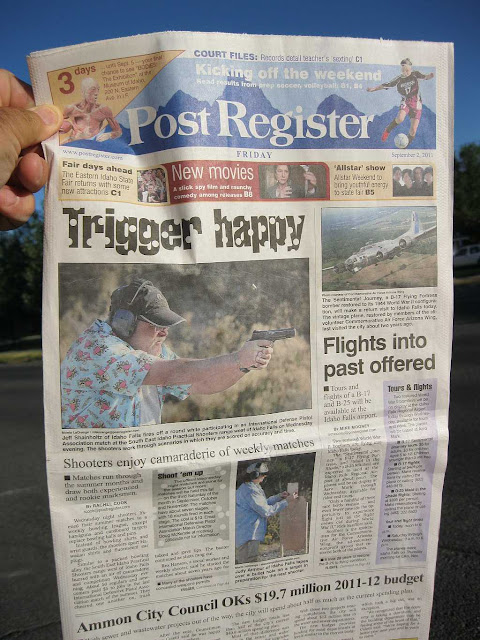 Our local newspaper, The Post-Register, did an outstanding job covering Wednesday IDPA shooting match.
Reporter Rachel Cook put together a great article copied below in italics.  Photographer Monte LaOrange capture a classic photo and the newspaper editors chose to feature it on the front page with a fitting custom graphic headline.  We are very pleased with the article.  Way to go, Post-Register!  (NOTE: the narrative below was written by Rachel Cook and is Copyright 2011 by The Post-Register.)

Instead of bowling shirts and wrist guards, the shooters sport Hawaiian shirts and fluorescent ear plugs.

Similar to a packed bowling alley, the South East Idaho Practical Shooters range west of Idaho Falls buzzed with an air of camaraderie and competition Wednesday evening. About 50 regulars and newcomers paid $5 to join in the last International Defensive Pistol Association match of the summer. They cheered one another on, trash talked and gave tips. The banter continued as shots rang out.

Rex Hanson, a social worker and weekly shooter, said he started the matches about seven years ago for "purely selfish reasons."

"I wanted more trigger time," Hanson said. "It's been just a boom to the club."

Hanson enjoys the social aspect of shooting and watching new gun enthusiasts get into the club.

The men and women fired their way through four stages. Three of the phases were skill tests, while one was a mall scenario of a bad guy holding a person hostage and shooting a security guard.

The shooters stood at the ready, one at a time, in front of each stage. A safety officer held a buzzer to the shooter's ear and signaled the shooter to fire. The shooters' goal: draw their weapons from the hip and hit the targets quickly and accurately. Misplaced shots tacked seconds onto their time.

"You're standing there with a gun in your hand, so yeah, there's adrenaline," match director Doug McKenzie said. "You have to perform against the clock."

After the safety officer's OK, the gunmen collected the shells from the range after each shooter. They masked the fresh bullet holes in the targets with strips of tan masking tape, which they kept on their pant legs and shirts.

John Parsons, who started shooting with the club this summer, said the matches helped him rediscover his love of pistol shooting after 40 years.

"Everybody's really supportive and helpful," he said. "It's just so easygoing and comfortable; it makes you want to come back."

Many of the shooters have concealed-weapons permits. Denise Spencer of Idaho Falls said the matches are good practice in case she ever needs to draw her weapon.

"I used to be really accurate and I still am, but this helps with speed, and that's a huge factor," Spencer said.

The matches also are a chance for Spencer and her father, Dave Spencer, to see who the quickest draw is.

"She beats me every week because she's still got those young eyes," Spencer said. "I beat her once and she never let it go."

Spencer said it's encouraging to see his daughter and more women attending the matches, which have grown in popularity since he started coming out about three years ago.

While the majority of the crowd consisted of middle-aged men, the final Wednesday match of the summer brought out at least one teenager.

Michael Sussman, 13, came with his father to try his hand at something different than the silhouette shooting he is accustomed to.

"It's been really fun," Michael said. "With this, you're shooting while you're moving and it's up in your face instead of downrange or looking through a scope."

The groups moved on to their last stages as the sun dipped closer to the hill. Glenda Haller of Idaho Falls and Diane Orr of Rigby sat in an SUV while their husbands shot. The women said their spouses have become devout shooters since retiring. The men are big fans of the Wednesday matches.