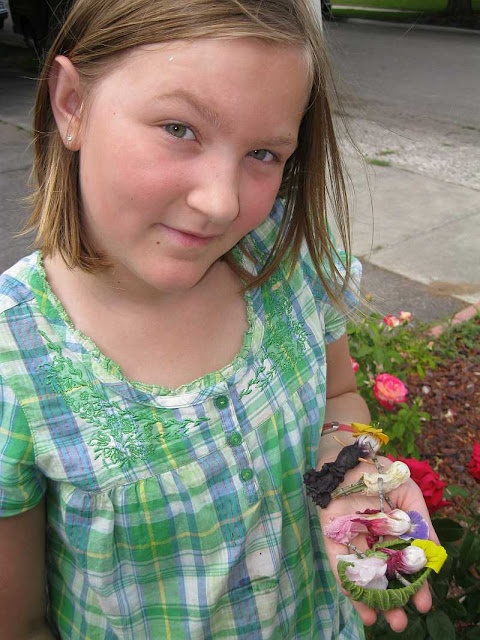 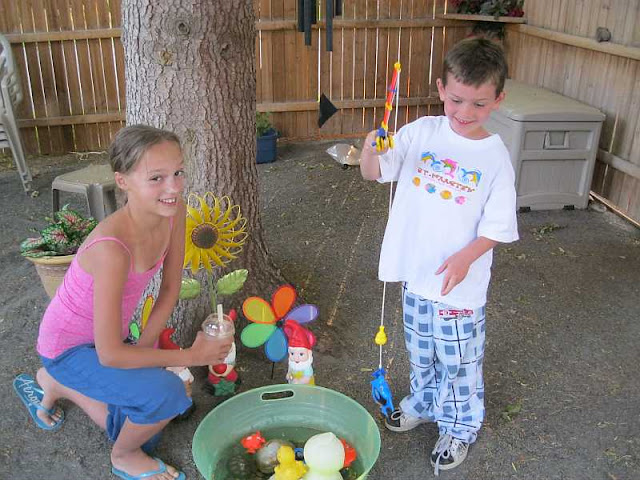 There's really only one way to get back to blogging.  Write?  Right!  Sometimes when too much time passes, the only way we can resume is to simply begin writing...letting the fingers tip toe across the keyboard with reckless abandon.  We have to leave a lot of stories untold on the table.  The only way to get back in the saddle is to climb onboard and Cowboy Up.  It's the Buckaroo Way.

Yesterday was a pretty low key day of recovering from the high speed week of Roger's visit.  Susun spent most of the day in the basement doing sewing projects.  We mowed the grass and tidied the house.  The blog author reloaded a few hundred rounds of ammo and once again re-established his relationship with the local Ten Cent Stores, finding all sorts of the usual goodies.  Our larder was restocked and we enjoyed a great evening visit from Mike V, Daughter Madison and Nephew Garrett.

Susun allowed a neighbor girl to roam among our hollyhocks in search of fixin's for making some hollyhock dolls.  Unbeknownst to me, the making of hollyhock dolls is a cherished young girl thing to do and apparently provides a fond lifelong memory.  We have to say the finished products were quite endearing, especially if you're into old-fashioned retro kind of stuff.

Meanwhile, visitors to our courtyard know that Kid-At-Heart-Susun has a small fish pond located therein.  Frankly, this so-called fish pond had been a real yawner for me.  It's "point," so to speak, was lost on my feeble brain.  Well, Susun enjoyed some sweet success with her fish pond last night.  Five-year-old Garret was mesmerized by the fish pond and used the pole and it's magnetic tackle to actually hook fish right out of the water.  He was so totally delighted with his fishing success, I have to say I apologize for yawning at the fish pond.  If you ever want to entertain a "young'un" well git yerself a right smart little fish pond and sit back and watch the smiles and enjoy the giggles.  It was quite fun.
Between Susun's bubble machine, the fish pond, hidden hollyhock happiness, the Sunshine Family and other assorts kid-dom toys, one never knows what type of entertainment value will surface on any given day.

We have a break until Sunday here.  That's when Rosa S. from Sedona arrives by shuttle from the Salt Lake Airport.  Soon thereafter, Bonnie and Bob B. from Cornville roll in with their black lab and a camp trailer.  After these Dear Friends hit the trail, Norm H., BTB  & Da Boyz arrive.  Shortly after their departure for a Middle Fork trip, the Spudboater Road Show arrives.  We're sure looking forward to seeing Spudboater again--it's seems so long ago that we were together for the kayak race down on the Verde in late March.  We get another break in the action during the first few days of August and then head out fior three nights in the Squirrel Meadows Guard Station with Houn' Dawg & Suzanne up alongside the Reclamation Road between Ashton and Flagg Ranch.  Busy, busy!

This past Sunday was an interesting day.  The blog author participated in his first ICORE match.  I was out at the shooting range for almost five hours.  There were 13 shooters there--all old guys like me.  Only Old School revolvers are allowed in an ICORE match.  Little Yonni finished 6th out of the 13 participants.  He's still basking in the glow of such a high finish amid a stellar group of lifelong target shooters.  After returning from the shooting range, Roger and we trooped off to a Chukars baseball game.  Roger has a long and storied baseball past so he thoroughly enjoyed the few innings we witnessed.  The Chukars were blown out 19-6 so we departed in the 5th inning to avoid watching any more of the lopsided scoring.  Late in Roger's visit, we all got into playing croquet.  Roger really liked the game and quickly became a certified professional.  He was unstoppable and unbeatable and sank seemingly impossible long distance shots as if they were routine.  Even though he trounced us both game after game, we all enjoyed playing several evenings in a row.  We enjoyed sitting around each night quite late there in the courtyard swapping tall tales, white lies and few true stories, too.  THANKS, Roger, we really enjoyed your company and we made some cherished memories!

Speaking of Roger, there's a our Local Roger--the newspaper publisher.  He and his wife are doing us a huge favor Saturday.  How's that?  Well, they are going to judge the Clayton Heritage Days Chili Cookoff in our place.  That means we don't have to go.  This is a very good thing.  Not only is Susun incapable of being a chili judge right now but the trip was going to cost a pretty penny and take a lot of effort.  As it turns out, we really need some R&R (Regroup & Recharge) time here before the next surge of our summer visitors washes ashore here in the Idaho Fall eddy on 12th Street.

Our garden is coming along nicely.  It is nearing its annual peak of picturesque postcard prettiness.  Plus, we are actually eating fresh-picked stuff from it: snow peas and zucchini.  Yummo.

Today's back to a pretty normal Wednesday.  Susun volunteers 10-2 at Habitat for Humanity while the blog author spends most of the day consumed with shooting sports.  We will go practice at the range this morning, do various mundane stuff during the middle of the day and then spend four more hours at the range competing in the weekly IDPA match tonight.  I sure wish I could do as well with an automatic pistol as I seem to be able to do with an old-fashioned revolver.  Oh, well, that's why people practice.  Speaking of pistol news, our long-awaited Bonomo Custom 1911 arrived in two packages last week.  We enlisted the IDPA Match Director to come to our home Monday to correctly and safely assemble it.  It's such a wonderfully beautiful pistol.  Wes G. sent an email calling it "gorgeous."  Wes said guys are allowed to use the word "gorgeous" when describing guns.  We agree.  It almost deserves its own shadow box so we can admire it for awhile before actually shooting it.  Good Ol' Bonomo sure dun good on this one!  Way to go, Tom!

And speaking of Buckaroos, we're going Hawaiian tonight the the IDPA match.  You wanna talk dime store cowboy?  Well, how 'bout Luau Johnny Aloha?  Geeze, what will he be doing next?    Have a great day and Many Cheers, jp 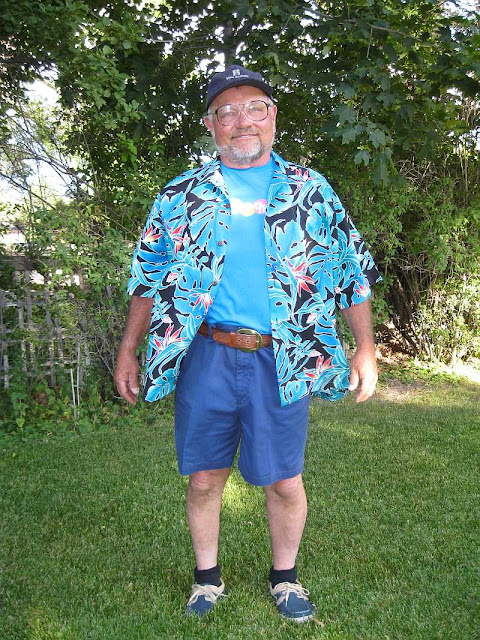 NOW THATS AN ALOHA SHIRT TO BE PROUD OF!!!