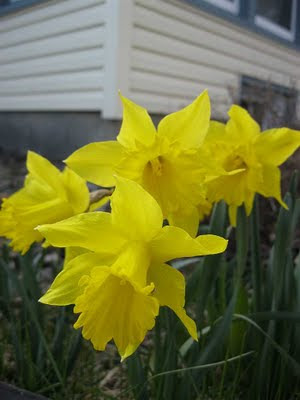 Happy May Day. Normally, people wouldn't ever associate the word "happy" with the words "may day." May Day is a universal distress call. However, today it's HAPPY MAY DAY! My Mom was named May as a baby. She's since changed the spelling to Mai. Anyway, it's great she actually has a day named after her. Happy May Day, Mom.

Yesterday turned out to be a wonderful day weatherwise. Clear skies, balmy temps and no w-i-n-d. Today promises another such day. Yippie, skippee, we're gonna go play golf! YEA!
(I can hear the groans out there now as LBRs read the above line.) Speaking of golf, we culled all our thrift store clubs yesterday and put them out on Craigs List. POOF, two BYU-I guys drove down from Rexburg and snapped them up for $40 and headed straight for the links. They were Happy Campers. Altogether we've sold $70 worth of clubs so we're actually just about even-steven now. In other words, the clubs we're using haven't cost us anything. That two dollar bag we bought Friday really sealed the deal for the buyers. It was a beautiful bag and had some shock and awe value. Houn' Dawg and Suzanne stopped by yesterday and that's how we hatched the golf plan for today--it'll be a foursome on the kiddie course. We doubt we will be doing much bowling here. Get this, one game of bowling costs almost twice as much as one six hole round of golf. ($5.75 vs. $3.25)

Susun turned her attention to the yard here and it now looks like a professional has visited the place. I don't know how she does it but she can apply a magic touch to landscaping faster than anyone I've ever known. Everything's finally unpacked and all the stuff in the house is finally hooked up. When you're leaving to go someplace, you have a deadline (more or less). However, when you get where are going, there's no real deadline for dealing with all your stuff. You can lollygag all you want.

It looks like we're buying another e-reader today. Amazon has partnered with a wide variety of retailers to bring the Kindle to local stores. So far this morning, we've seen ads for the Kindle in Fred Meyer, Best Buy, Staples, and Target. The prices are the same as Amazon charges online but there's no chance to return a Kindle to Amazon (unless it's not been opened). We're definitely buying one today from whoever has the most favorable return policy--probably Target. Kindle prices start at $114 and, naturally, go up from there.

Speaking of retailers, we read a CNN Money story this morning that quotes the Wal-Mart CEO as saying in public that Wal-Mart customers are running out of money. While our gubmint continues to insist there's no inflation, Wal-Mart's CEO says that higher gas prices are, in effect, taking all the money out of Wally's customer base. It's an interesting world out there.

We participated in the morning HAM "net" once again down in the Verde Valley. It's actually quite fun and we hope to participate every morning we are able.

Susun enjoyed the symphony last night. We're sure glad she got a chance to go before the season ended. Her friend, Jan, treated Susun to a ticket so the concert was free. Cain't beat that.

With the return of good weather here, Yard Sailors are out in force. Our neighbor across the street has a sale yesterday and we're guessing almost 100 cars stopped to gander and poke and sometimes buy. Getting out and visiting yard sales is a sure antidote to cabin fever.

We had a nice outdoor visit with our neighbors, Chuck and Lynn. Chuck, as LBRs know, is an accomplished bagpiper. He's part of a new music group called the Eagle Rock Pipe Band. You can click here to check their fine website. You can see Chuck in the band group photo at the top of the website.  He is the one at the far left in the back row.  Chuck also received his HAM license last year.  He doesn't much like his call sign: KD7IOU.  Well, at least it's easy to remember!

That's about all for this morning.  Have a great day & Many Cheers!  jp
Posted by John Parsons at 9:32 AM