Today's our last day here in Good Ol' Laugh-Yet.  Lots more chores to do in Mom's house.  And lots o' chores to do for me, too.  Wasn't there a product once called "Chore Boy?"  I never did make much of a Choir Boy but I sure do make a heck of a Chore Boy.

It's Monday morning here in McDonald's.  How do I know?  Well, there's a large clic of Oldsters enjoying their Monday Morning ragchew.  There's 8 of them and it's obvious it's a de facto "invitation only" club.  They are gumming their Egg McMuffins and sipping their Senior Coffee and laughing loud, racuous laughs about why the chicken crossed the road...or something similar.  All eight of them combined would weigh about as much as our Suzuki Samurai.  You can do the math on that one.  Good thing McDonald's supports their weight management program. 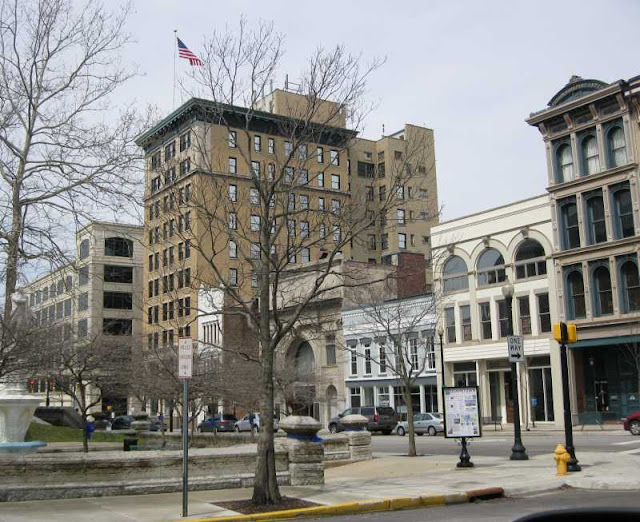 Perhaps you may have noticed DR & LBR Wayne R's comment.  Bless Wayne's Traveler Spirit.  He actually said he'd like to come back to Laugh-Yet to check it out someday.  That was Sweet, Wayne.  Thanks.  Well, it is a place that's itneresting, weird and odd all at the same time.  Let's take my first experience with golf.  It's shown in the photo above this  paragraph.  What, you say?  How could that building be connected to golf.  Well, from a very tender age as early as a child can remember stuff, my Dad would tell me that his Dad knew the janitor there.  That's back when the building was the tallest in the city.  It easily qualified as a skyscraper in this flatlander burg.  Well, the janitor would let Dad and his three mischievious brothers go up on the roof and drop golf balls down on the sidewalk.  They could only do it, of course, when they wouldn't kill a pedestrian walking below.  Oh, how my Dad loved that story.  I remember asking him what a golf ball was and he was very vague about how such balls were used.  But it perked my interest and I could hardly wait to grow up and see what golf balls were used for.  Dad once said they got a ball to bounce practically back up to the third story.  It sure must have been fun for him "back in the day."

The photo below is my grade school--St. Laurence.  Saints were like the Hall of Famers of the Catholic Faith.  They all did something so incredible that they were forever enshrined and got school named after them.  Most Saints just got killed by the murderous, barbarous heather Romans.  None of us kids wanted to be Saints because we figured we would have to die to "git 'er dun."  The only other option was causing a miracle to happen but none of us knew how to do that and teh nuns weren't about to teach us how. 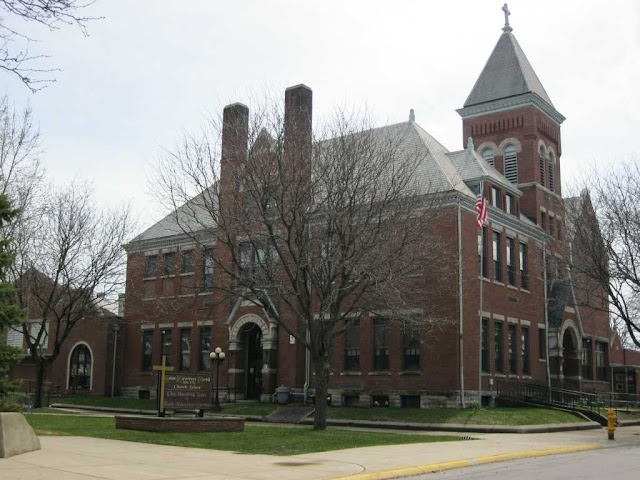 I always liked Saint Laurence.  He seemed like a pretty cool guy.  Supposedly, the Romans burned him alive on a giant iron BBQ.  He was reputed to have said, "I'm done on this side, you can turn me over now."  Whether that's true or not, it resonated with us kids.  It was totally macho but also totally aware and, in its own weird way, funny in a way only kids know.  I went to kindergarten in Columbus, Georgia, and first grade in Clearwater, Florida.  I started in second grade at Saint Laurence in second grade well after the school year had begun.  My second grade nun was the SAME nun that taught second grade to my Mom back in the 1930's.  I kid you not.  Meanwhile, they made me sit in precisely and exactly the same old desk that she sat in during the second grade.  The nun hated me. Naturally, all the other kids in class shunned my like the plague because if the nun hated me, surely they didn't want to get punished simply for association with the new kid.  The nun made me sit with my face in the corner wearing the dunce hat almost every day for petty infractions like smiling or being cheerful.  She was Attilla The Nun and it's good thing she didn't rob me of a positive, cheerful attitude.  Nuns hated positive cheerful attitudes.  Somehow such non-conformity was bad for their business and it was an inherent threat to their power over us children.  We were all supposed to guilty forever against a full slate of crimes against humanity and we were all forever supposed to be begging forgiveness.  If we didn't have any real sins to confess each Saturday night, we were tacitly encouraged to make some up otherwise the priests hearing our confessions would be VERY disappointed in us morons.

Luckily, I had wonderful experiences at school in Georgia and Florida.  The Florida school was so cool and the nuns were awesome and supportive and actually encouraged us kids to smile and be cheerful.  Imagine that!  The playground went down to a swamp and they didn't mind of we caught snakes and played with them, at least as long as they weren't of the poisonious variety.  They actually taught us how to tell the difference.  Heck, if a Laugh-Yet nun saw a snake, she would have died on the spot.  Saint Laurence School was built in the 1890's...93, as I recall.  Nothing in it had been modernized when I showed up there in the 50's.  They say it's modern now but I have my doubts.  Well, enough of nun stories--everybody has nun stories.  They are less than a dime a dozen.  Nuns.

Ah, shucks, just one more nun story.  My 8th grade nun was committed to an insane asylum two months afgter finishing my last school year there.  To say she was certifiably nuts was actually a correct statement.  Yep, them wuz the daze.

Well, not much else to report this morning.  We will be checking back in here this afternoon before we return this computer back to Sam's.  I actually would keep the little thing if it was a tad faster.  I know it's slow by how long it takes to load one of my digital photos off the camera card.  We're talking S-L-O-W!  If it processed photos just a wee bit faster, I'd be more inclined to keep it.  That's the deal breaker.

I just sent you a book to the gross address. "The Life and Times of The Thunderbolt Kid, a Memoir" by Bill Bryson. It's the story of a kid growing up in the midwest in the 50's and you will laugh out loud all the way through it.

John - Your nun experiences mirror mine!I had Sister Laurentia for 2nd, 4th, and 7th grades. I swear she took on the 4th grade and 7th grade assignments just so she could ridicule and attack me in that "holier than thou way". I had Sister "Philo-mean-a" 1st and 8th grades. One day she put her pointed finger in my face and said, "You Ranney boys are the work of the devil". As you say, evil cannot trump stronger happiness.

Enjoy your ride in the time machine back there.

John will love the Bryson book. I read it last year and nearly wet my pants. Also, finding out that Wayne is an experienced Catholic also makes me laugh. No wonder I like John and Wayne. You've actually almost recovered!