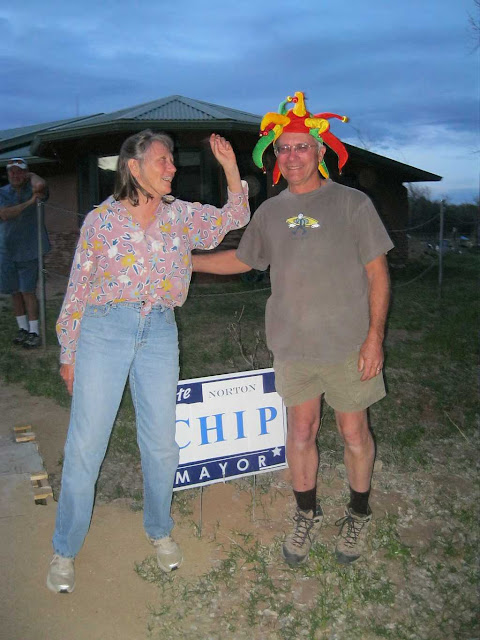 Here we are again, two days late and a few synapses short.  Let's take it in chronological order once again.  Saturday was pretty slow because of the gimpy, limpy leg.  The leg is MUCH better now and only hurts if I turn it wrong.

We loaded up the blue canoe and took it back to State Parks.  Just when I was wondering how the heck I was gonna get it off the truck by myself Pat R. roared up in a Gator and single-handedly off loaded the boat for me.  What a gift.  Most of the day was spent rigging the Skamper for an overnighter.  Naturally, the battery was stone cold dead and took hours to charge. After fiddling with it for a few hours, we headed over to Kathy & Chip's Place for the First Annual All Fool's Party.

We set up the Skamper in a wind-sheltered place beside their passive solar home and enjoyed the festivities.  There were about 50 people there and it was a real hum-dinger pot luck.  Many of the party guests had enjoyed a river trip beforehand or joined Kathy for a hike to the Salt Mine Pueblo.  It was a hoot of a party and we took a grand total of 176 photos between the two of us.  We posted up 118 of those pix in two different albums.  Click here for John's 99 fotos.  Click here for Susun's 19 fotos.  Since we were camped out, we enjoyed the party until the very last guests left and then crawled to sleep about 11 pm.

Sunday was understandably slow moving.  Enjoy thoroughly enjoyed a nice breakfast and some quality time visiting with Kathy & Chip.  We helped then fold and load all their rental tables and chairs.  We also helped Chip learn more about all of Google's cool functionality.  We arrived back at 2nd Chance Ranch at noon.  The remainder of the day was spent fiddling with the Skamper and the party photos.

The wind howled all weekend.  Oddly, it laid down for the food service potion of the party.  However, as soon as the party ended, it resumed howling.  Ditto Sunday.  The wind really rocked.  We thought there was no possible way for a campfire.  However, I followed my intuition and cut wood and prepared for a campfire, "just in case."  Sure enough, as the sun played tag with the western horizon, the wind obediently laid down and it was a perfectly calm and delightful evening for a campfire.  Strange how that works.  Gary came and and we three visited into the pitch blackness of a new moon night.


Susun and I did some tactical planning yesterday and realized we have only about 3 days left to finish projects and pack for our trip north.  We then have two days to rig the house and property for its summertime slumber.  Today's our only time to pack and prep for our two airplane trips coming up this week.  For all practical purposes, our winter sojourn here is at its end.  Basically, even though we're not actually driving outta here until April 20, we're on our countdown clock now

Speaking of driving outta here, today (April 4th) is the 10th Anniversary of our departure from The Straw House out onto what we called our 2001 Western Space Odyssey.  We had grandiose plans to travel up the West Coast, across Canada and then down the spine of the Rockies over a six month time frame.  Alas, on April 12th we washed ashore on the bottom steps of the Grand Staircase in Kanab, Utah, and our lives changed forever.

Yesterday afternoon, I needed a break.  Susun was napping and I was worn out from various activities of the weekend.  I decided to "veg out" and simply stare at the computer and see where my wanderings would take me.  I know from part experiences that such times typically lead me to very interesting places.So it was yesterday and here is how it unfolded.  After meandering all around the Western US various Craigs Lists looking for Samurai Stuff, I decided to study up on all of the HAM radio clubs in Idaho. By and by, I got around to visiting the Pocatello Amateur radio Club (PARC).  They have a real nice website.  They even have a roster of their members posted publicly on the website.  I began studying the roster to see if I recognized any of the names.  Nope, not a one.  Then I started looking at the roster to see who had the oldest license.  Some guy named Craig N. got his license in 1956.  Looking a little closer I noticed he had an odd email address.  I then recognized that someone had created a custom internet domain and assigned Craig an email address to this domain.  I then decided to visit that domain and check it out.  Well, the domain pointed at yet another domain and I wound up on the website of Craig's son, Curt, who is now a public radio reporter who lives in Boston.  I began reading Curt's blog and quite literally stumbled onto a very moving story.  I sent this story to one of our own DF & LBR's and she was moved to tears by reading it.  I actually choked my myself while trying to tell Susun the story.  I don't know if it will affect you in any sort of a similar way but I can guaranteed that it is a riveting and unique story.  You can click here to read it.  Such is life when one wanders the Blue Highways of cyberspace.

Just in case any of you were holding your breath wondering, silver this morning touched $38.63.  Cool, huh?

You and Gary are still thinking silver. I sold, as I mentioned to you both, back in those days of the Hunt Brothers, Nelson Bunker that is. I have no silver to sell. Well, maybe some heirloom junk but it's staying put. Glad you two survived the shindig. Three days at 2nd Chance, that's not long. Safe travels to visit your mom. It was howling like a banshee here all weekend. Still haven't planted, but may try again today. And tomorrow I get some baby chicks if I get there in time before they are gone. Aurucana's.time to diversify the egg colors.