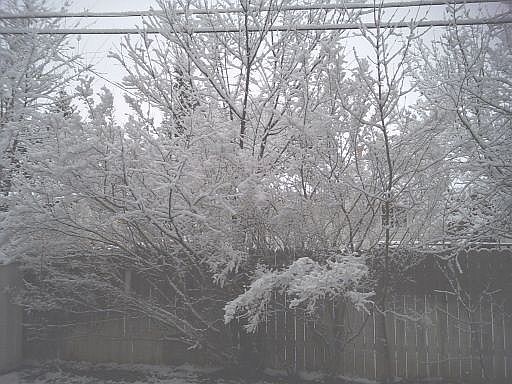 I have been sentenced to 10 years hard labor with ankle and wrist irons for confusing Joni Mitchell with Carly Simon.  OUCH!  Those lashed on my back sting!!!!  The verbal abuse rings in my ears as the dungeon guards and dragons howl with dirisive laughter!  OUCH!  My coffee got a LOT cloudier after than bonehead move.  Where's our dunce picture when we need it?

Well, the photo above is NOT from Indiana--it's courtesy of Terry M. in Idaho Falls.  It is a scene from his yard this morning.  Meanwhile, back here in Indiana, iut's been cold and raining off and on.  I had to buy a jacket this morning.  Visibility has been less than a mile all day...not that there's anything to see anyway...the high fructose corn syrup plant is still visible when you're withing a mile...that's the major landmark here.  So pretty.

It's been a long and trying trip so far and the story is far too long and complex to EVER tell here on this blog.  Some of you will undoubtedly hear about it in person but it sure won't show up here.  It's too long and far too complex.  Due to a variety of circumstances, I decided to buy a netbook at Sam's today.  it only set me back $318 with tax.  It's a nice Dell unit and the keys are bigger than most mini-tops.  I will be checking in online each morning and evening, not so much during the day--probably not at all during the day--too much coimplex stuff going on.  Susun is having a wonderful time.  Sarah said yesterday, "Mom's in her element and happy as a clam."  Whenever you hear those words, you know Susun's Smilin' & Stylin'.

I learned a couple of new phrases already today.  Their anti-drug billboards here are all about marijuana, not meth.  Anyway, the giant headline of all those billboards sez, "Got, Baked?"  I guess that's what they called "stoned" here.  Meanwhile, I've seen a LOT of used car dealer signs touting some used car that says the year, make, model, price and then the words "Fully Loaded."  Somehow, it clicked with me today and I realized that's car dealer code for "fully loaded with problems."  Fully Loaded will never quite seem the same to me after today.  Maybe you could get baked and fully loaded here in more ways than one.

Indiana is, yes, still Indiana.  For some reason, people here always look the same.  They look like, well...Hoosiers.  Hoosiers all ahve this distinctive posture and appearance to them.  Their eyes all look the same, too, kind of like cow eyes.  Somehow they all remind me of cows standing in a pasture waiting for something (ANYTHING) to happen.  A barking dog would be a good deal for most of these cows.  A snake?  Now THAT would really excite those cows.  But I digress, I guess because it's been a day of disgressions and so forth.  At least I can still have clouds in my coffee even if I don't have a clue who wrote it or sung it.

Hey, Silver Fans, did you notice the shiny metal went to $41 today?  Yee--HAAW!  Only The Dear Lord and The Lone Ranger know whence and how high silver will go.  HI, HO, SILVER!

Have a great evening & Many Cheers!  jp
Posted by John Parsons at 5:54 PM