Thanks for all Your Best Wishes

Thank You So Much for each and everyone of Your Best Wishes.  Some sent e-cards, some sent postal cards, some sent emails, some made blog comments and some made phone calls.  Did I forget smoke signals and carrier pigeons?  Regardless of the medium, everyone sent something and all Your Best Wishes were (are) so very much appreciated and valued.  They meant more than you can know to Susun and me, too.  We could both really feel your support during these days just gone by.  THANK YOU~~THANK YOU! You really touched both of our hearts with your kind words and thoughts.

Don's services were very special and touching, of course, as they should have been.  Over 75 people showed up, including numerous people Roger or Susun had never met before.  They read about Don's passing and came to pay their respects.  The little chapel was full and some people were seated in an overflow room.  The youngest was Baby Ella at a mere 3 months and the oldest was 90-something.  The white-robed minister dutifully intoned all of the appropriate Old and New Testament scriptures and the music was just right.  There were only two people who stood to speak about Don.  The Drewster was the first and I was the second.  I know it would have been too hard for either Roger or Susun to stand and say something in front of the attendees.  Drew made a fine speech, reading from carefully written notes.  I almost clapped and whistled for his speech but, of course, knew that would be wildly inappropriate.  I DO have some manners, afterall!

I was surprised when no one was standing up to say anything so I took the podium and winged it.   I didn't write out what I said so I don't know what I said. All I know is I stood up and said something straight from my heart.  I reached forward from the podium and tried to stare directly into the eyes of each person there.  When you make honest eye contact with people at a funeral it's real special.  I even made 'em chuckle out loud. The acronym for that is COL.  It's different that LOL but similar.

Basically, I talked about Don' rock steady, even-keeled personality.  I said I considered that to be the Lesson Of Don's Life and a gift to each of us.  He withstood incredible physical challenges that few others could have endured.  Nothing ruffled Don's demeanor and I said that should be an inspiration and a challenge to all of to emulate.  I closed by saying the Minister forgot one important thing about Don, "He was one heck of a cribbage player and that's a great gift to me."  That's when everyone COL.

Roger and Nancy each gave me a great big hugs for my words and many, many of the older people in attendance personally thanked me for my remarks.  Since I can't remember precisely what I said, I must have said something special  for so many people to make a point of saying something to me.  I learn a long time ago that if one truly speaks from their heart, it is their heart that is talking, not the actual brain of the person.  There's a subtle difference between the way brains and hearts make speeches.

I do recall mentioning the irony of the moment.  I met Don for the very first time right there in that room they day of Susun's Grandfather's funeral.  So it surely was ironic that the only other time I had been in that room was to say goodbye to him.  Odd how life works like that. 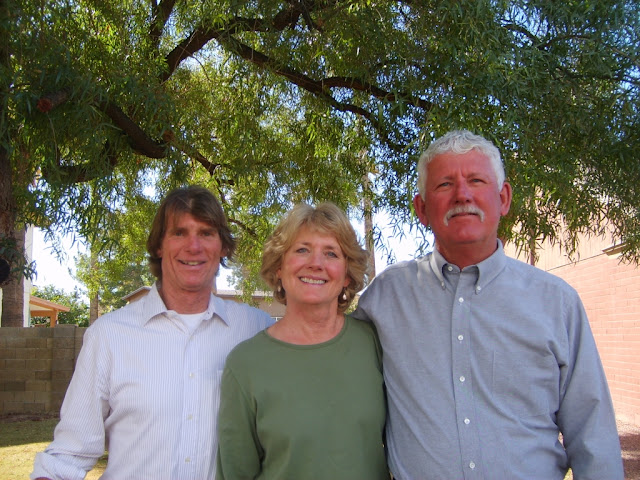 After the short 40 minute ceremony, about half of the attendees reconvened at Roger's Place to enjoy a finely wrought catered luncheon of smoked salmon and spiral sliced ham with all the trimmings.  Copious beverages flowed and a good wake was had by all.  One of the highlights among the attendees was none other than Craig Arnold, Stasea and Sarah's Father.  That's Craig at left above with Susun and Roger. It was so great to see Craig--he drove over and back from San Diego in one day just to attend the services!  We both enjoy Craig so much--he's a Great Dad and Grand Pa.

The afternoon passed in the blur sort of way that such afternoons are wont to do.  There were many fleeting and memorable vignettes worthy of a description.  However, we shall let them pass un-noted here as they would each take far too long to embellish.  I stood outside alone in a sunny niche and reflected on the life and times of the Meldrum Family.  I sure wish I could have recorded the stories of Doris & Don.  Susun was ever the gracious hostess, visiting with as many of the guests as one could possibly do in such a short time.  And, poof, it was all over seemingly before it had begun.

We have already selected two places where we are going to scatter Don's ashes.  One is from the middle of the Old Navajo Bridge over the Colorado River at Lee's Ferry.  The other will be in Payson, Utah, his birthplace on the northern flanks of Mt. Nebo. 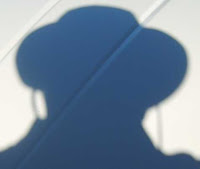 As the evening drew to its inevitable close, I noticed Arlyn was doing some homework for her ASU college art class.  So I asked her to make a logo for Zuks of Arizona that I could use for our own two Samurais.  You can click the small version to see the large one.  THANKS, Arlyn, you helped us bridge ourselves Back To The Future in fine style.  It's time to proceed on.

Many Cheers!  jp--The Man In The Hat
Posted by John Parsons at 7:12 AM

SOUNDS LIKE it was a fine event. I have sung at many funerals and memorial services and some were pretty sad and "down"I'm sure that you, with your fine command of language, found the right words to say.
Thank you for doing so.

John, what is your personal web address?
I want to send you a messag for your eyes only, but the Google one I have just shuts down my WebTv machine!
Would appreciate it.

PS How is the wine doing?