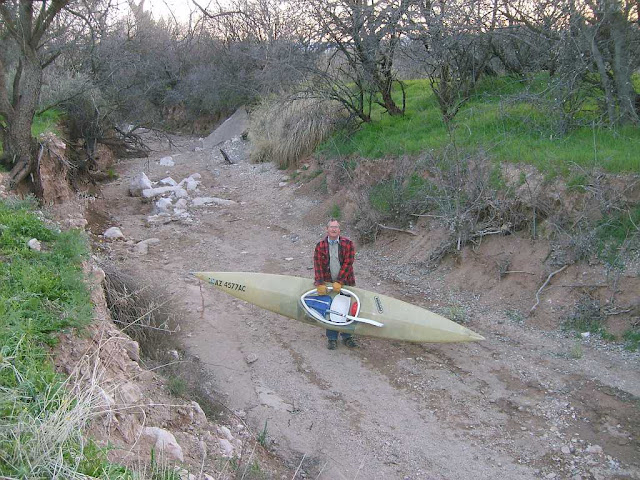 A new chapter is set to begin in the saga of the Phoenix Cascade.  We were supposed to pick it up over at Gary's yesterday afternoon.  However, everyone's Day Plans changed and we then thought we'd get it today.  Imagine our surprise when Gary strolled through the mesquites and up the wash to make a special delivery of the venerable boat with the long story.  THANKS, GARY!

Gary made his first flight in his "new" ultralight yesterday.  He bought a used one.  He's been a hang glider and a licensed pilot since the 70's so he's no stranger to the friendly skies.

Gary's been telling me to buy a Garmin GPS 60csx at COSTCO before they disappear.  The 60 csx is the one we're using for the Verde River Guide project.  It not ours but we like it so much we want one, too.  Well, we should have listened to Gary cuz they are no longer for sale at COSTCO.  Dang.  As luck would have it, a used 60 csx ebay auction was ending at 3 pm yesterday.  After a spirited bidding war, we won it for $200.  The seller is the Big Dog Pawn Shop in West Jordan, Utah. 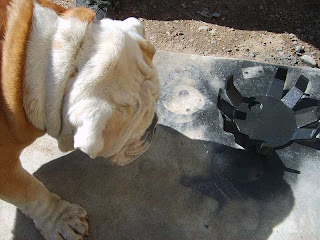 Speaking of Big Dogs, we went over to Myron's to buy a crab.  Myron's dog, aptly named "Big" here inspects the crab to make sure all is copacetic.  We will write a post on our Zuki blog about Myron's crabs.

It took longer than expected to park The Spudboater's guest cottage.  Our big truck has set so long the battery was stone cold totally dead.  It took several hours to charge it.  Susun worked her magic on the interior and it's quite a cozy little abode now.  Lots more remains to be done to it today.

Congratulations to Kirsty and her Family.  She finally posted a birth announcement on her blog.  Baby Ellabeth Malia was born at 12:19 am March 22nd.  She weighed 9 pounds and measured 21.5 inches.  These are very Happy Days in Kirsty's home.

Many Cheers, jp
Posted by John Parsons at 8:35 AM