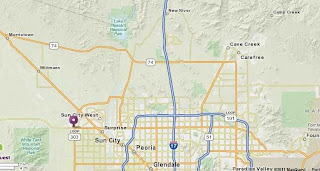 Every day's a great day but Sunday always seems a wee bit greater. We hope and trust that your Sunday will be delightful in every way.

We're heading back to Surprise, Arizona today. Gee, it was only a few Sundays ago that we went down to Surprise. Whazzup? Well, we've been looking for a spare alternator for SuziQ. Looking long and hard, we might add. Finally, some Zuk owner decided to part with his for a mere $25. Yep, you guessed it--the alternator's in Surprise.

But the REAL question is: Why would we seemingly waste a perfectly glorious spring Sunday going to pick up a spare alternator?
We're glad you asked.

In talking with the seller yesterday, we learned he is also a retired guy who has a MAJOR obsession with Suzuki's. Currently he has FOUR of them: two Samurais and two Sidekicks. Of course, that's in addition to his own airplane and assorted other big boy toys. He spends his summers in the Rocky Mtns. and a month each fall on the Moab trails. Anyway, he says he's solved the puzzle of how to get a smooth ride out of a Samurai and that it's so smooth his wife loves going on his bone-jarring trail rides. He also says he's figured out how to turn a four door Sidekick into an awesome trail machine. Hum....

We told his news to Susun and she became as intrigued as me. So, we both decided to take a Sunday Drive to Surprise and spend time picking this guy's brain and checking our his four Zuks. The alternator became an incidental coincidence to this road trip. We're figuring it's time and gas money well spent in the interest of academic research. We've never met anyone with more than two Zuks under their wing. Four? That's unheard of unless three of then are junkers sitting in the back yard. Anyway, it's going to be an interesting Sunday.

Yesterday went according to plan. Susun waved a magic wand over her shed's interior and it's worthy of its own HGTV special now. She also painted the toughest wall (the one with all the trim). I planted and painted my two heavy steel posts and then moved at least 1,000 pounds of large rocks up out of the wash to place here and there on the property. We sealed off every avenue of entry for a normal pickup truck. As expected, both projects too all day and we didn't finish and clean up to almost 6 pm. We were both pleased with the results of the day.

The upcoming days promise to be very busy. Monday's the NRCD meeting, then there's the Tuesday Target Shoot and one day this week, we MUST do the last leg of our Verde River project. Josh is out on spring break now so we've got to finalize this project. Meanwhile, we have to get cracking on spraying the weeds so every spare minute is going to be occupied in the week ahead. Yikes.

Well, hey, at least it's Sunday and Life is Good. Cheers, jp

PS--The Goatherder reminded us that Monday is "Pi Day."  Here's his note:


Pi = 3.14159265
So... Today 3.14, at 1:59 and 26.5 seconds don't forget a hats off to Archimedes and them Babble-owninans.
Personally, cobblers are square, and pie are round far as I'm concerned, less'n you make yer cobbler in a dutch, or your pie in a pie-rex, which disturbs the natural order of the universe and should not be attempted.
Posted by John Parsons at 8:22 AM

Hey John - could you give us non-Zuki folks a brief account on why you love Zuki's? It seems you are always buying parts for them or repairing them. What's the attraction and what are the upsides of these strange vehicles?

My Sidekick is not for sale.