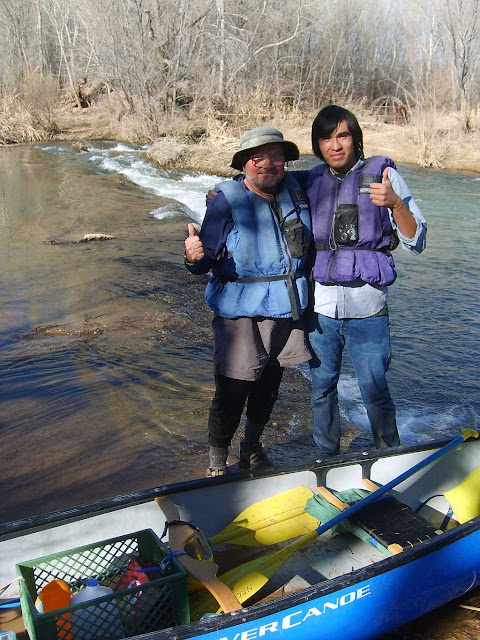 Monday was a real "get up and go" kinda day. Josh and I made a plan over the weekend to do our second canoe trip.  Since Josh had to work at 5:30 pm, everything was shifted a littler earlier in the morning.  We didn't even have time to clean up after the Game Day party Monday morning.  We threw our river stuff together and hustled out of the house by 9 am.  We got to the Wal-Mart parking lot about 9:30 to meet Josh.  After another "duffle shuffle," we headed for Bignotti.  Suzi's Shuttle Service dropped us off and left in a cloud of dust.

Josh and spent quite a bit of time using bow saws, loppers and hand clippers making a much better pathway for from the parking area to the river bank.  Just as we got on the water about 11 am a bald eagle flew very low right over our heads.  We both knew that was a great omen for our day.  We started downstream about 11:15.  It was a real "adventure" type of day.  We had 5 portages.  One was actually a "line job" and wasn't all that difficult.  Two of the portages were a lot of work.  One was a big load of work and involved tandem-towing the canoe maybe 300 yards across a dry wash alluvial fan.

I'd forgotten there is an actual Class 2+ rapid in this stretch.  We were lucky to run it and remain upright and dry. The trip was considerably longer than I had thought it would be.  I was thinking it was in the 5-6 miles distance but it turned out to be over 9 miles.  I told Josh we would be to the take out no later than 3 pm and almost made it on time--arriving at 3:15.  All-in-all, we both agreed it was a "two thumbs up" kinda day. Thanks to Suzi's Shuttle Service prompt and professional service, we were able to pack up in a hurry and got Josh back to his car a few minutes earlier than promised at 4 pm.

Then Susun and I skee-daddled back to the 2nd Chance Ranch and had to hustle just to get a campfire up and running before sunset.  Gary came over and we three enjoyed a fine Monday evening until the last embers died down in the dark.  Susun fixed a fine dinner of what we call "kyoto bowls" and we went to sleep pretty late.  'Twas a LOONG day!  THANKS, Josh, you did an awesome job Monday!  THANKS, Susun.  Without Susun's cheerful and happy shuttles, what we're doing on the river would be impossible.

PS--The photo was captured at the take out at Newton Lane.  That's a small redneck diversion dam in the background.  (No, it doesn't divert rednecks--it was BUILT by rednecks.)
Posted by John Parsons at 7:36 AM

great picture and writeup! Josh was effusive about the day. Thank you so much for including him.

John it is so awesome that you have introduced so many people to the joys of boating, including myself. It is a treat for anyone who gets to learn from and float on the water with you. I hope we can do it again soon. I would love to show my fiancé the joys of floating the river!