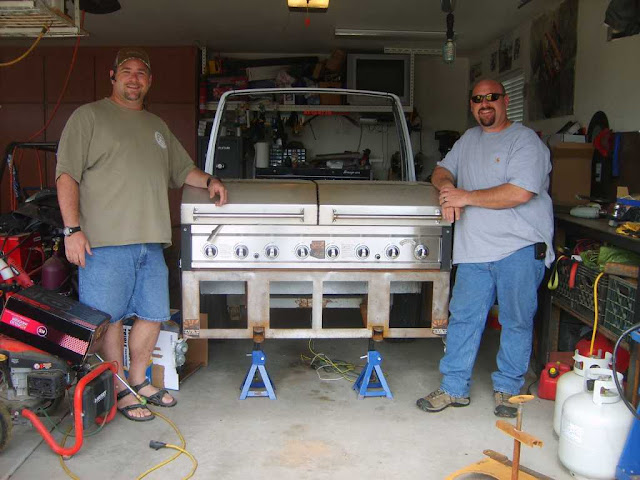 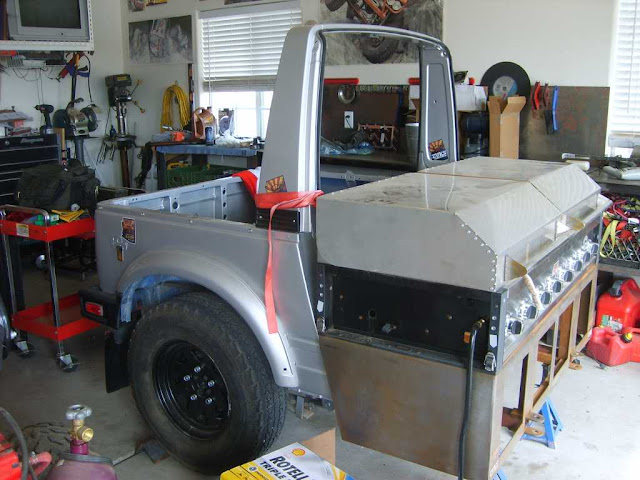 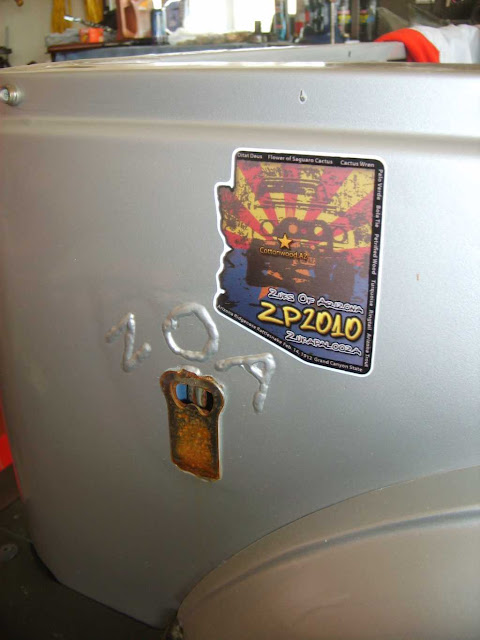 Friday would have been a great day all by itself just because Susun came back home yesterday.  But it got better as the day progressed on to its conclusion.  After having a nice lardy little lunch (see comments below the Titanic Tortilla post), the Minister came to meet with the Family about Don's services Tuesday.  That seemed like a great moment to once again become a free range roamer here amid the sea of red tile roofs sprawling endlessly across this metroplex.

Luckily, I had created a worthy urban adventure via the magic of the Zuks of Arizona Forum.  As you know, I was trying to get two wayward tires over to Steve in Surprise.  Enno jumped the Forum and said I could bring the items out to his place in Far East Mesa (not to be confused with Far East Asia).  Believe me, Enno lives so Far East of here, it felt like I was driving all the way to Asia!  By and by, when I was almost in Apache Junction, I came upon Enno's Place.  As chance would have it Enno was visiting with his best bud Daryl.  These two guys made a unique pair of Best Buds.  It didn't take too long for me to spot the Samurai Bar B Que.  I was dazzled by this shining gem.  Dazzled is a tame word.  We spent a long time going over all the various incredible features of the mean grilling machine.  It is easily and truly THE BEST BBQ rig I have ever had the pleasure to actually see with my very own eyes.  It's not even finished yet either.  When these two guys get done with this wonderment, the whole world will stand in awe of it.  I fully expect it to wind up on a magazine cover when it's finished.  Well, my near worship of their BBQ kind of broke the ice and pretty soon we were all chattering like grade school kids trading baseball cards.

By and by, I learned that Enno and Daryl were business partners and that Daryl is a top flight genius when it comes to working with metals.  He is actually manager of a big metal fabricating business in Phoenix.  He is so skilled with the computerized laser cutting machinery it's spooky.  SO, it turns out that the pair happened to be looking for ideas about how to make money making metal thingies for Samurai.  Well, they sure met their match yesterday with me being The Idea Guy.  I started reeling off all these ideas for various metal thingies and they were just as be-dazzled by me as I had been about their BBQ.  Each of one them kept mumbling, "WOW, that's a really great idea, why didn't we think of that!"  And the hit parade kept on rolling as idea after idea poured forth from my hidden font of endless ideas.  They truly liked each and every idea I pitched out and finally even told me there were going to give me FREE versions of each idea and maybe even a cut of the sales of them.  I declined the financial aspect but jumped at the chance to turn my ideas into reality in our very own Samurai.  The whole thing clearly marked the start of something BIG in Susun's and my relationship with the Samurai.  Meeting these two guys was a complete game changer in how we will shape our future usage of SuziQ and any other Samurai we will own.  What started out as simply a favor to pass along something to someone else would up as one of those "Big Wheel Keeps on Spinning" episodes of "all in a day's karma."  It was a very fortuitous turn of events for all of us.

As I drove back west toward Old Mesa, something caught my eye moving fast at one o'clock low.  I did a major double take and blinked a few times but, sure enough, it was a WWII B-25 Mitchell light bomber flying not far above the palm tree tops.  I could even see the machine gun sticking out the nose cone.  As it banked to its left almost directly overhead, I could hear and feel the rumble of those powerful twin radial engines.  The afternoon sun lit up its Army Air Force markings and it was an emotional and stirring sight to see.  I quickly headed toward Falcon Field to see if I could watch it land.  I surmised it was the Commemorative Air Force B-25 that's based at Falcon.  Unfortunately, it must have been on a true "mission" as it never returned.  Meanwhile, though, I enjoyed glimpsing many of the vintage aircraft based at Falcon, including the B-17 "Sentimental Journey."  That's the B-17 I toured inside an Idaho Falls hanger with Houn Dawg and co-worker "Eagle Eye" Sharon W.  (Click here to see a photo album of that tour.)

Well, that was a fun flashback!  After leaving Falcon Field, I stopped off at an Autozone and enjoyed bed liner enlightenment.  That's too long a story to tell here.  We'll let you know when it is written and posted on the Zuki blog.  And as I was driving home, I decided to open yet another new chapter for this Fun Friday.
Yes, it's about golf.  Just before lunch Friday, I finally found a "Dee-Eye," the famous LDS Thrift Store formally known as Deseret Industries.  Somehow, I just knew that a Mesa, Arizona DI would have a lot of cool golf stuff.  And so it was.  I wound up getting a new pair of genuine leather black Footjoy golf shoes, a n awesome left hand putter, a new Callaway golf hat and a Silver Creek golf shirt for a whopping $16.  The shoes alone would cost $90.  The hat still had the original hang tag on it and would have cost $25.  But the putter was and will always be the Star of The Show.  It's a kid's putter.  I mean a REAL little kid putter. It's probably designed for a seven or an eight-year-old.  Somehow, I bonded on the spot with that putter, seeing as how I often have the brain of a seven or an eight year old.  So, in spite of all the other fun stuff that happened yesterday, I was chomping at the bit to take that putter out for a spin.

After dropping off some groceries at Roger's, I ripped right back out again and headed for the putting green at the nearby Royal Palms golf course.  I even put on my new golf shoes, too.  There was an old guy and a little kid putting, too.  By and by, the Old Guy came over and asked if I wanted to join them for a putting match--low score wins, of course.  Why, sure, of course.  The kid was eight and putting like a pro.  The Old Guy was his Grandpa.  It didn't take long to realize I was putting with two real pro golfers and it really elevated my putting game.  The Old Guy was knocking down 50 foot putts!  it was incredible.  The Kid yawned at 8-10 footers and they dropped in the hole like a homesick rodent scurrying back down below.  Well, believe it or not, my little kiddie putter really changed my game and I was holding my own with these two sandbaggers.  At the end of nine holes, we were all tied up, even-steven.  We played another round and we were still even.  I was ecstatic and they were obviously very happy, too.  I finally realized I could actually putt well.  Who knew that all it would take would be a kiddie putter and taking a visual lesson from a kid, too.
Meanwhile, Susun called to wonder where the heck I was so I departed the putting green and drove home with a broad smile on my face to enjoy a very Happy Happy Hour.

We all enjoyed a great Family Home Evening.  Susun rustled up some chicken tenderloin and made a stir fry with ginger, garlic and fresh mushrooms, too.  It was a very Fun Friday.

Now it's off to Goodwill's 50% Off Sale this morning.  Susun's gonna get a whole "new" set of golf clubs and maybe I will find my dream pair of polyester pants.

Cheers, jp
Posted by John Parsons at 8:28 AM

That is one of the most awesome looking bbque's I've ever seen. And it looks like the fabricators like to drink beer and grill, too. Kudos to them. And you finding them in the first place.