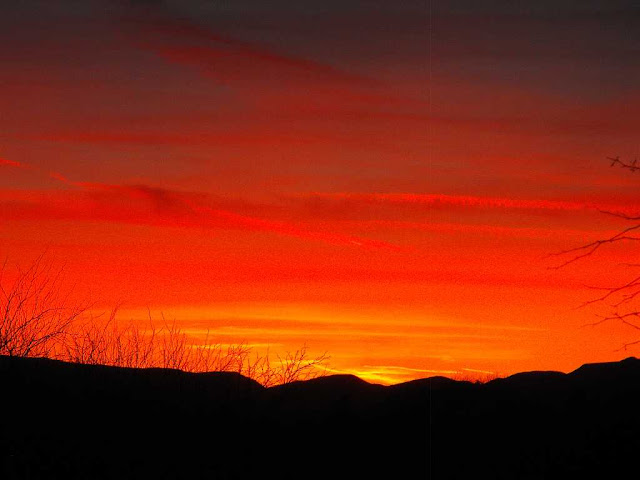 Last night's sunset was unusual.  It started out as one of the most dull, lackluster sunsets of the winter.  It then did complete change and ended by being one of the most spectacular sunsets of the winter.  In total, the sunset lasted over one full hour.  The last light shown above kept turning deep pastel colors that covered the entire western sky.  This lame photo only captures a small portion of the light show.  The final red glow seemed to last forever.  The middle of winter is either February 4th or 5th.  We figured this sunset was Mother Nature's tribute to being halfway to "official spring" on March 21st.

We enjoyed a nice day of this and that.  We headed over to Myron's Place (AKA: Zukies Off Road) to meet Sam from Dewey.  Sam sold us a spare tire and a hood prop rod for $25.  Then we went to Cottonwood and ran a raft of the usual errands.  Upon our return, I installed a new fire extinguisher and carbon monoxide detector in the pop-top.  Then I headed over to Camp Verde for some more food shipping for Game Day.  As you know, I have this long-running mental game I play at grocery store.  If I save over 50%, I win.  If it's under a 50% savings, they win.  Yesterday at Basha's, I spent $31 and saved $37 so I won.  The way my mind works, that's a final game score of 37-31. Fitting for Game Day, doncha think?

Over in Cottonwood, I had struck out looking for the correct size spare tire to fit the Zuki wheel.  I even had a Mexican tell me the tire that was on it was worthless.  Oh, the indignity of it all.  Meanwhile, I went to perhaps the Verde's most gnarly tire shop there in Camp Verde.  The guys that run it would put the cast of Deliverance to shame.  They are the meanest, gnarliest looking people you ever saw.  Anyway, the guy wanted $30 to put on an old beater tire of the right size.  I conned him real good and said I thought my existing tire was real valuable and I wanted some money for it as a "trade in."  Oh, that toothless Bubba Boy in the totally greased covered t-shirt went over that tire like it was a CSI episode.  Finally, he says, "How 'bout ten bucks?"  YES!  SO I got the new spare for $35 total (15 for the wheel and 20 for the tire.)  We're really "good to go" now in the Zuki since it finally has two spare tires.

We put together a real nice evening campfire and Susun filled the house with the aromatherapy of roasting chicken.  Hey, speaking of aromatherapy, we thought you might enjoy yesterday's Pickels Cartoon.  Nuf said--Cheers, jp