We wrote the above blog post title last night and thought we'd change both the title and short post this morning.  However, DF & LBR Deano made a comment that's way too cool so the title and this snippet have to remain:  "Today was a two, two, two, too, too, too Day.  It was also a Major Dear Diary Day. Was it too much? Tune in tomorrow morning to find out. We're celebrating a fabulous and wonderful day and we hope you are as well."

What's so special about yesterday?  First things first.  Yesterday Dear Friend Tom B. presented me with a custom 1911 "government model" .45 caliber automatic pistol.  I nearly fainted from the sheer surprise and excitement of it all.  Tom only builds his custom .45's for Family & Friends. A "Bonomo Custom" model .45 is a true heirloom.  The craftsmanship that Tom puts into his pistols is amazing.  I spent two hours with him Saturday going over all of the options for this pistol.  He didn't think he could get it "shootable" for at least 2-3 more weeks.  It was just a pile of parts Saturday in his workshop.  When he showed up with it yesterday it bowled me over.  I hadn't been expecting it and it was a surprise of the highest level.  Gary donated some hand-loaded ammo to use and Wes G. gave me a box and said, "Welcome to the Club."  Tom wants to run at least 500 rounds through the pistol before he takes it to the next level and gives it a final finish.  The pistol shoots like a dream and my very first shot was danged near a bulleye.  Tom found a special "old guy" rear sight that practically locks onto the barrel bead.  The pistol is easy easy to hold, aim and fire.  All of the parts are as precisely matched as is mechanically possible and yet it's easy to operate.  Tom even made it a left-handed pistol for me.  I've never owned a firearm as awesome as this one.  The so-called "government .45" was my Dad's favorite pistol.  He was issued one as an Airman in WWII and was a good marksman with it.  Dad even had his photo taken with his .45 back in those days.  I hope to find that photo this April when I go to Mom's house.  Maybe I can strike the same pose as Dad did.

It was a great morning at the range.  Gary was there and The Goatherder even showed up.  GH is a real good pistol shooter and really enjoyed my new .45.  One of the shooter let me use his $4,000 custom laser-sighted pistol.  That laser dot could make anybody look like Annie Oakley.  Amazing pistol!  Dick from Cornville was there, too.  We got to know Dick pretty well back in early 2007 when we lived at Dead Horse Ranch State Park.  Dick spent his whole life as a Phoenix policeman and he's as happy as they come.  He served as a Park Ranger until tough times hit the state park system.  Now he's kind of the informal range master for the Tuesday Target shoots.

I brought the Coleman 413D and cooked a couple pots of coffee for everyone.  I also bought a dozen donuts and the attendees were very appreciative.  Ironically, while I was using the 413D at the range, Wayne R. sent an email asking whether he should buy a 413D he found online.  All in a day's karma, eh, Wayne?

It was a magical day there at the range--a one-of-a-kind day I'll never forget.  WOW!  THANKS, TOM!  THANKS, GARY!  THANKS, WES! 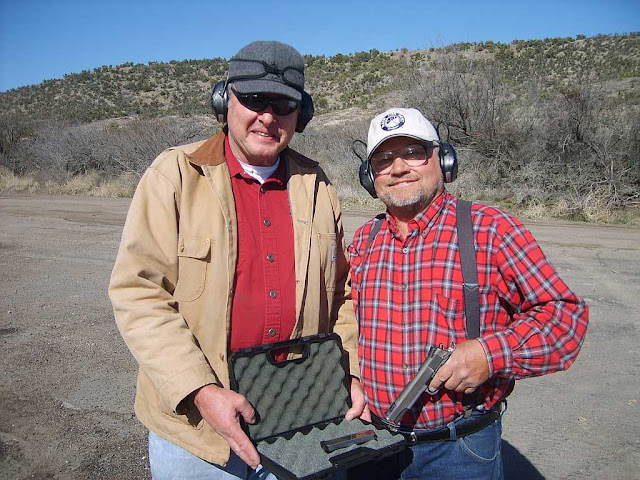 When everyone packed up their stuff and hit the road, I had to skee-daddle home pronto home to tidy up for a visitor.  Doug Von G. arrived precisely at 12:30 and stayed until 2:15.  He's currently Mayor of Clarkdale, AZ. but is perhaps better known as a world class birder, professional photographer, and lifelong Friend of The Verde River.  Doug's always been sort of a larger-then-life person to me.  He's done so much with this life and there's this kind of energy that radiates from him that I can't explain.  It was quite the compliment that he drove 45 minutes over from Cottonwood to interview me about the Verde River.

First, some background.  Believe it or not, the Walton Family Foundation has invested $1.1-million cash into an multi-faceted effort to help save the Verde River.  Yes, that's the Walton Family of Wal-Mart fame.  Believe it or not, the Walton's identified the Verde River on their own.  No one here even thought of contacting them--the Walton's reached out on their own to make contact with the local people.  One of the first people they chose to talk to was Doug.  Doug wears many hats well.

By and by, as the Walton investment in the river grew, Doug became the leader of the Verde River Economic Development Study.  The meat of their study is detailed interviews with community leaders to attempt to quantify the economic value of the river and how that value might play into the river's preservation.  I was chosen for an interview because of the 20 years I spent trying to save the river back in the days before anyone thought the river was worth saving.

The interview lasted about 90 minutes.  He recorded it on a nice digital voice recorder and it will be transcribed.  I actually became emotional at one point in the interview and nearly burst into tears.  Luckily, I maintained most of my composure.  I was very honored to be one of the interviewees for the study.  Doug was very conplimentary and later sent this kind email:

"Just a note to say thanks for taking the time to let me interview you for our VREDS study. It's clear to me that together we can make a real, positive difference in the health of the river and the economy of the Verde Valley as a result of this study. Your thoughts will play an important part in our conclusions and where we go from here. I'm making your interview a "must listen"" for my team, as your depth of understanding and the amount of thought you have put into river issues is second to none!"

Well, naturally, doing the interview and getting a note like this from Doug himself would have made yesterday a "Dear Diary Day" all by its lonesome self.  But there's a wee bit more.  Just before Doug left, I delivered a sermonette about the importance of social media and how social media could/would/should play a key role in the future preservation of the Verde River.  Doug said, "You mean The Verde oughta have its own Facebook, right, John?"  Roger, Doug.  So after presiding over a Clarkdale Council Meeting, Doug went home and, voila, the Verde now has its own Facebook!  Talk about instant results!  Here's Doug's note:

Coming as all these things did on the twenty-second day of the second month prompted me to coin the blog post of  "2-2-2 Too Much?"  It was an overwhelming day for me and almost too much, too.  After Doug left, I was spent.  All I could do was mill around doing menial tasks around 2nd Chance Ranch.  My mind was numb.  I built up a very nice campfire last night, a little larger than normal just to celebrate the day.  I also put on a dutch oven of potatoes so I can enjoy some country fired taters and eggs this morning.  Gary eventually came over and we had a fine time going over the events of the day.

Have a Great Day Today & Always as well as Many Hearty Cheers!  jp