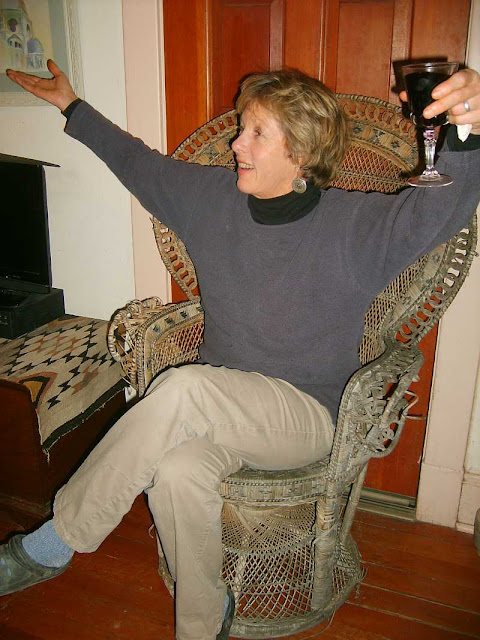 It's been awhile since we put together a regular style blog post. So it's time to ketchup! Let's see, the last newsy post was way back on Tuesday.  Each of the posts since then have been pretty short and specific.  Perhaps it's time to put together a post that is the online equivalent of a Sunday drive through the cyber countryside.  One of the nice things about such a rambling post is that you don't really have to start anywhere in particular and there's no particular order in how things unfold.

Last night we helped celebrate Marsha's birthday.  Frankly, I have no clue as to the real date of Marsha's birthday--never have had.  It's always on whatever day she conducts her party.  She's real flexible about the date of her birthday.  Marsha's a real Shining Star as you might surmise by the photo above.  The little photo at left is from her 50th b-day party some years ago. Each year, she holds court in the same queenly royal fan-back chair.  There was a good news, bad news situation at Marsha's party.  The bad news was that for the first time in 28 consecutive such birthday parties, it was NOT a pizza party!!!!  The good news was that it was a Baptist Church-style potluck.  Each visitor duly marched in carrying some edible thing hidden under tin foil. Surprisingly, the resulting dinner turned out pretty well, almost as if someone had planned a real menu.  There were a lot of new faces we've never seen before as well as all the usual suspects we've been seeing for more than two decades.  I wore a short sleeve shirt and received some odd stares and comments from people about "you Idaho people."  Everyone else was bundled up like Nanook Of The North.  Odd.  All-in-all everything went well and we left early to arrive home by 8 pm.  Thanks, Marsha!

After the morning fiasco with the virus infection, we were already loathe to spend much time online.  Then the tragic news came out of Tucson so we stayed offline all day. Our Prayers continue to flowto the Families and Friends of the deceased and the survivors.  May God's Grace Bless Them All.

Our biggest chore yesterday was "disgesting" stuff.  No, it was not a culinary experience.  On Friday, we traveled over to Bob's Place in Sedona.  Believe it or not, we've had stuff stored in teh garage there for five full years.  We don't even know what is in the boxes of stuff over there.  We vowed we would "deal" with our stuff in Bob's garage this winter and so began that saga on Friday.  While Susun visited the hair salon, I began the heavy lifting to dissect the stacks of boxes and stuff as much stuff into the Nissan as the little bugger could hold.   We're due to return to Bob's Tuesday morning for another mega dose o' stuff.  So, that meant to had to pull out all the stuff from the Nissan yesterday and find a place for it somewhere in a shed or the house.  We are running out of room to stuff stuff here so the digestion process took al day and involved all sorts of ancillary tasks such as moving around old stuff to make room for new stuff.  Why do we lug so much stuff from place to place?  Is it genetic?  Is it a disorder?  Is it a disease?  Is there a cure?  What about special medicines?  Voodoo, maybe?  I hope that someday we won't have to face the specter of stuff any more.  HA!  What are the odds of that?  Well, you know the refrain--it's about Slim and that Nun.

There was a small silver lining to Stuff Wars.  We found all of our photo albums from Year 2001.
Likewise we found four months of narratives from January through April 2001.  Believe it or not, I was one of the earliest so called "bloggers."  Why are we not surprised?  Way back in the dim mist of the dawn of websites, I painstakingly posted daily narrative entries on websites.  I just checked Wiki's history of blogging and I am pretty sure I qualify as one of the earliest bloggers since I started in the mid-1990's.  By the end of the 90's, I was pretty comfortable posting up daily entries to a website.  When we retired from the NRCD in January 2001, I was already posting daily entries to a domain we owned then called "fromthedge.com."   We went down to Rocky Point on 01/11/01 and stayed for over two months.  We lived on the beach in a small pop-top camper.  I'd get up at 4 or 5 am and use an old COmpaq 386 laptop running Windows 3.1 to write a daily narrative and save it to an antique floppy disk.  Then we'd drive into Rocky Point and rent a computer connected to the internet for 20 or 30 pesos an hour.  I'd copy the ASCII text from the disk and upload it to our website.  Well, there was a retired dentist and his wife in the same RV park who became smitten with our early blogging.  I mean REALLY smitten.  So they went back to their home in the States and printed out each and every entry I wrote over a four month time frame.  He then bound the entries in books for each month.  Amazing but true.  If you think I write a lot now, you should have seen the output 10 years ago--geeze--it was prolific.  Anyway, all four of those bound books make quite a heavy load.  We were quite happy to find them intact amid the chaos of our stuff at Bob's.  They made for great reading ten years later and we will post up some of it here in the near future.

Our weather's been pretty good lately--daily highs pushing 60 degrees and lows in the mere 20's  The Weather wonks say it's gonna get "cold" this week.  HA!  They are calling "cold" as something that sees daytime highs in the lower 50's.  That would be a tropical heatwave in Idaho right about now.
It's been great campfire weather and we're looking forward to a nice fire again tonight.

Susun's getting industrious today--she's gonna bake bread.  That ought to be real interesting.  Meanwhile DF & N Gary is gonna take us both over to Bell Rock and show us a new trail up to what's locally known as the "Transcept."  Frankly, I can't see how a trail could scale those cliffs so it's gonna be interesting to find out the secret route to the top.  We're trying to get a new hiking streak going again.  We've been far too sedentary each morning.  This week we started walking up the Blue Grade again and I think yesterday was the third morning in a row.  It feels good to get out again.  You can click here for a Google map of the Blue Grade hike.

Tomorrow is another "all in a day's karma" episode.  As you recall, we thought we were going to get appointed as  Verde NRCD Advisory last month.  But, nah, there was a reason it didn't happen last month.  Tomorrow is precisely 10 years TO THE DAY that we left the NRCD in the first place.  Yep, it was 01/10/01.  We're returning on 01/10/10.  Is that karma or what?  This time we are properly listed on the agenda and we have no doubt it will all come together.  Ah, Karma!

Hey, here's some good news--green chiles!  Yesterday, we scored eight pounds of them for a mere $1.97 "out the door."  Yep, Food City had them on sale for a mere 25 cents a pound.  We're gonna be roastin' and toastin' today!  Yes, they are all Straight Chiles.  We sure wouldn't buy 8 pounds of Crooked Chiles.

Susun's brother Roger and his wife, Nancy, are coming for a visit tomorrow about 11 am.  They haven't been to The Straw House in like forever--probably maybe 12-15 years, we can't remember.  So, that's gonna be fun and, besides, it gives me a great reason to leave the NRCD meeting early.

Have a great day & Cheers, jp

PS--Peggy gave Marsha this great hat for her birthday last night--it's just too good of a photo not to use here this morning. 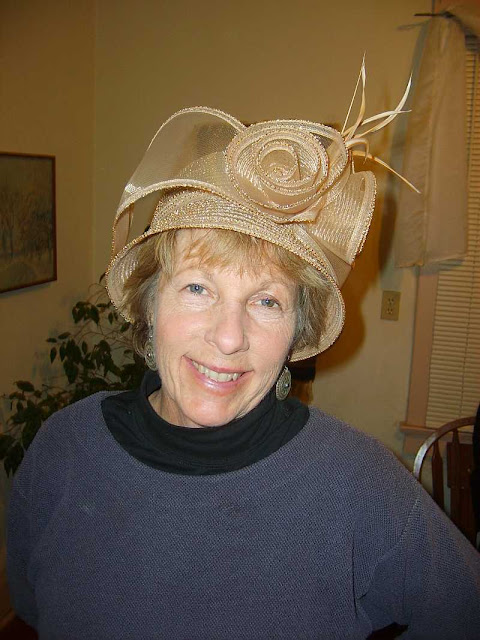