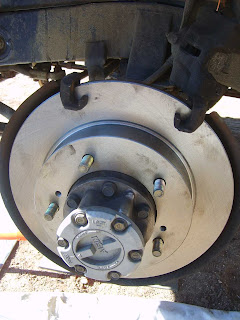 Today's been a mu goo guy fun day. Gary and I teamed up to put new front brakes on SuziQ.  "Twas a merry little time indeed.  We got started about 11 and finished up about 1.  Since we weren't in a hurry, we just dinked around, gee, brakes happen!  It was a very easy and straightforward job.  What made it ridiculously easy was that I bought two brand new disk brake rotors in Mesa Sunday evening.  That meant we didn't have to take the old rotors to someplace to have them turned.  We just put the old rotors in the same box the news ones came in and, that was that.  Shiny new parts are such fun! Between the two of us we had all the necessary tools and knowhow.  it was quite enjoyable working with Gary.  He's so easy going and knows so much.  Gary's planning on buying a Zuki himself so it's likely our Guys Who Work on Cars Together gig will continue for the foreseeable future.

Well, Susun and I have been chuckling all morning about the Light Bulb post.  Now we have even more to chuckle about--two pithy comments on that post--one from Goatherder and one from Wayne.  Both had their "between the lines" subtleties.  It's nice to know we resemble an "obscure and de-sanctified saint."  Who knew the Idea Apparatus could lead to such choice underground status?  Wayne says he's sending the photo to some "old friends."  We know who they are.  They have all participated in previous compromising poses.  However, now they are all upstanding citizens and definitely wouldn't be wearing light bulbs for inspiration.  We can hear them all now, "There he goes again."  Thanks, Wayne, that made us both LOL.
Posted by John Parsons at 1:56 PM