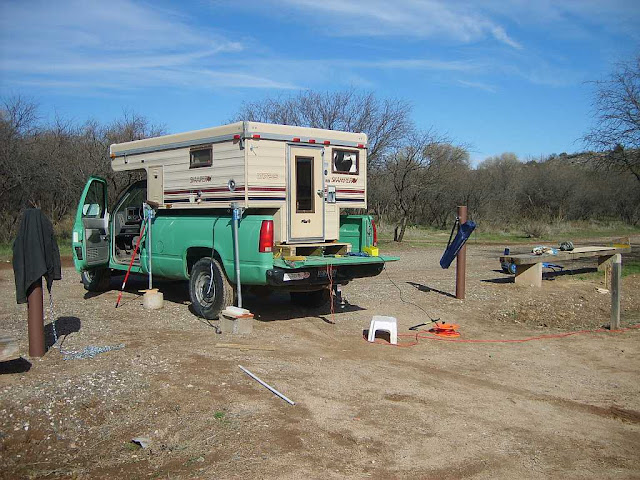 'Twas a pleasant New Year's weekend.  We watched nary a nano-second of football.  That probably puts us in the .000001% of the red-blooded American male population.  We spent portions of both days fiddling with fitting The Skamper into the big truck.  Fittingly, we finished fiddling yesterday.  'Tis all right and proper now.  What's so special about jiggering this camper?  Well, it's designed for a smaller bed.  So, it's all about the feng shui of position & plum and square.  Plus, the rig has to be braced so it can't wiggle and waggle and yaw and all sorts of other bad things mismatched campers can do.  Meanwhile, we maximized the side spaces so we can now store all sorts of stuff under and beside the camper.

Even though we've only worked with this new unit for a couple of days, we can already tell it's a keeper.  It's just about as perfect for our needs as we can imagine, even if it is 25-years-old.  We're hoping to take it over to Marsha's Place next Saturday for its first trial run.  Marsha has a tradition that's been going on forty years.  When her January birthday rolls around she throws a party for her Dear Friends and give them gifts.  No one gives Marsha gifts--SHE gives gifts.  She's a renowned potter so the gifts are always some sort of glazed and fired clay thing.  The other part of the tradition is that it's a pizza pot luck but no one can bring a store bought pizza.  All pizza has to be made from scratch in Marsha's kitchen.  You wouldn't believe the amazing variety of creative pizzas we've seen over the last couple of decades there.  Well, as you can imagine, libations flow long and strong at Marsha's birthday party.  As you know, we don't imbide if we're driving.  So, it could well be that our new camper becomes the de facto "designated driver" next Saturday night.  It will be mighty interesting to see just how cold it gets inside that thin tin and canvas contraption.

Speaking of cold, we see it's been as low as -14 this morning in Idaho Falls.  That's cold but it's still a yawner for most of the old timers there.  They brag about surviving minus 50 and such.  As those old timers grow older, the depths of Good Old Days temperature fall farther.  What was once probably minus 30 soon becomes minus 50 and it wouldn't surprise me to hear the same people pushing it to minus 60 or 70.  It's one of the licenses that comes with growing old.  When younger people exaggerate, their friends call 'em on it.  When old people exaggerate, we all smile and nod in agreement and enjoy the fib.  It's the Grand Pa Story Teller's License and nobody minds bald face lies when they are told by gray-hairs with a friendly smile.  "Why, Sonny, I remember when it was so cold, it froze the cows right solid in their tracks--you could just go push 'em over and they'd fall right flat on the snow.  Took 'til spring to thaw 'em out."  You know how that goes.  We've all been there, done that.

And speaking of real snow, here's the New Year beginning situation.  The Verde River is looking good.  Happy Jack as over 30 inches.  The Salt River's watershed is pretty paltry with hardly two feet of white stuff.  Meanwhile, Two Ocean Plateau at the head of The Snake is sitting on five feet.  Galena Summit (a Salmon River indicator) has a little less than four feet and Harriman State Park looks good with almost 3 feet.  If a normal winter ensues from this point forward, it looks like we will have decent river runoff both here in Arizona and up in Idaho.  If La Nina thumps the Pac NW like it's supposed to do, we might have another gang-busters river flow up north.  Being in the desert, Arizona can look real good in early January and then vaporize before March.  The NWS people keep holding tight to their La Nina mantra here:  "Dry & Warm," they chant.  Time will tell and we shall see.

Cheers, jp
Posted by John Parsons at 8:28 AM