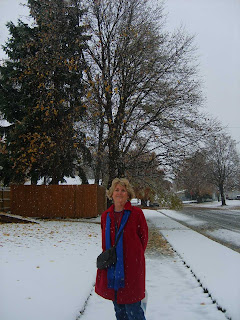 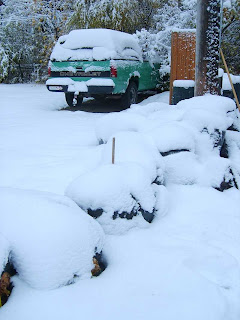 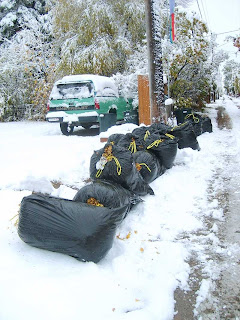 The season's first winter storm was very interesting.  As predicted it started in the wee hours of early Monday morning.  Those "wannabe snowflakes" turned into the real thing as Monday wore on.  By late afternoon it was snowing heavily.  The rate of snowfall picked up after dark and continued into the wee hours of Tuesday morning.  We awoke yesterday to six inches in the backyard.

There wasn't any time to write a blog post yesterday.  The trash guys drive our alley about 8 am sharp each Tuesday.  We took one look at all those leaf bags buried in heavy, wet snow and knew perfectly well the trash guys wouldn't touch them in that condition.  So, we hot-footed it out there and cleaned off all the leaf bags and garbage containers.  Then we helped "the runner" load them into the back of the truck and, poof, there were gone.  (The runner is that guy who follow the truck on foot tossing in all manner of trash.)  It's amazing the stuff they will pick up here in this city.

Next on the agenda was firing up the snowblower to clean our sidewalks.  The snow was so heavy and wet that it took quite a bit longer than normal.  Much of the cleaner was hand work with various shovels.  When the snow is as wet as this batch was, you can't really life a normal snow shovel--it's too heavy--you have to use a square point short handled shovel.  If you use a long handled square point shovel, you will wrench your back for sure.

Meanwhile, both vehicles were basically buried.  The sharply cold early morning temps turned the wet snow on the vehicles into hard ice.  We had to wait until later in the day to dig them out.  Naturally, the big truck was "stuck-in-place" and wouldn't budge.  So, we had to fire up the snowblower once again to clear an open path to the street for it.  Since the camper shell seam leaks, we also had to clean off all the snow piled on top of it, too.

Freeing the Nissan was pretty straightforward.  However, the snow that fell off the roof into the driveway had sealed shut the garage door with a mini-avalanche of snow that resembled a summertime shaved ice drink.  Digging out that part of the driveway was a tiresome and lengthy proposition.

Despite all the heavy lifting and multiple sessions, we were the lucky ones.  None of our neighbors had jumped on their leaves so they couldn't even think of clearing their sidewalks.  If the snow doesn't melt clean away before the next storm, their leaves could easily remain entombed until spring.  Chuck and Lynn are facing a real mess with their leaves.  Kenyon's son actually had a chance to rid their place of leaves on Saturday but instead blew them into a giant pile in the middle of the yard so kids could romp in the pile.  Dumb. Very dumb.  Now that pile is a giant sodden mess and we have no clue how they will ever move it until sometime in 2011. 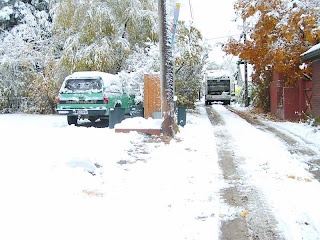 We were also real lucky in that our maple tree shed all of its leaves in a very short time period.  In a frenzy of leaf sucking this weekend, we were able to capture 99% of the leaves from this tree.  So, somehow, we came out of this one OK. (NOTE: The tree photo up top was taken Monday pm before the brunt of the snow arrived.)

It's still quite cold and odds are 50-50 as to whether the snow will melt away before the next storm hits.  It probably won't  according to the forecast.  Our travel plans are totally up in the air (pun intended).  This morning's Pokeymon Prediction sez one of their main computer models is DEPICTING A DEEP TROF EXTENDING ALONG THE CANADIAN BORDER FROM A LOW NEAR LAKE WINNEPEG. THIS PUSHES THE JET OVER SRN ID WITH HIGHER CHANCES FOR PRECIP AND COLDER TEMPS MONDAY AND TUESDAY.   This isn't good news.  We've made a deal not to purposely travel in bad weather.  There's no need to do so and what's the point?  We will just have to sit tight and wait it out.  Trouble is that the seasonal weather pattern has obviously changed and La Nina is now firmly in charge.  Even a cursory glance out in El Pacifico shows ample water vapor, lots of low pressure systems and a jet stream more than willing to wreck havoc here.  (HELP!  We're trapped on 12th Street!)


Not much else to report.  Thanks for all the recent blog comments.  They are much appreciated.  Susun went off to her last evening soiree with her girlfriends last night.  She baked a really spiffy spinach-jack cheese appetizer. YUM!  She also made up really beautiful little gifts of garam masala for each of her friends. Don't know WTH about garam masala? You're not alone.  Click here for the wiki on garam masala.