Do you have anything special planned to commemorate the last day of November?  We're gonna take a hike around Bell and Courthouse Rocks.  That's where we always begin a new hiking gig.  We will keep hiking Bell-Courthouse until we acclimate ourselves to the hiking routine again.  Only then will we branch out and start doing other hikes.  Today will be our first visit to the Sedona area since our arrival nearly 2 weeks ago.  Time to check our mail, see Betty Mom and marvel at the astronomical prices in Weber's grocery store.

On December 6th, we will mark our 9th year since we began day hiking again.  That's a story we will tell on the anniversary itself.

Yesterday as a Laundry Day.  Susun is such a trooper when it comes to cleaning clothes in a coin laundromat.
She can do a truckload of laundry and walk out with a smile on her face and say something like, "Gee, that was fun" and really mean it.  For the first time in my life here in the Verde Valley, I didn't spend a single dime in any of the grocery stores.  That's weird.

We decided to try to find a decent taco in Cottonwood and our first attempt was a miserable failure.  We went to someplace called Concho's on the far north end of Old Town.  They advertised a dollar taco on Mondays.  There was no way to get the taco unfried.  The airhead waiter said they they only served them fried and that it wasn't possible to serve a taco unfried.  Huh?  I wonder if the guy thought that a gringo wouldn't know the difference.  Excuse me but the corn tortilla starts out UNFRIED and food can be put into an unfried corn tortillas even easier than it can be placed in a oil-soaked, crisp tortilla.  The tacos were billed as "chicken tacos" but I had to remark to Susun, "Let me know when you spot the chicken."  Eventually we found a few specks of what might have once been a chicken.  Well, we can cross that eatery off the list in our Great Taco Search.   If the Taco Search goes anything like our Idaho Falls search for fresh french fires, it might not turn out so good.  As Susun said, "Guess we better make our own." 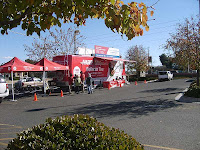 While we were in Cottonwood, we noticed a huge AARP van parked at Walgreen's.  Intrigued, we ventured over to ask "Whazzup?"  They were giving a whole battery of free tests so we opted in.  We've never seen as automated and smooth an operation.  We both rec'd total cholesterol, blood pressure, glucose, body mass, and bone density in a blink of an eye, plus a free year's extension on our AARP membership.  It was fun and educational.

I went into Home Depot and came out without spending a dime there either.  I was looking for asphalt emulsion with which to coat the water shed roof.  Home Depot had what I was looking for but, as I stared at the item, I was overcome with an aversion to giving Home Depot any money.  I thought, "I don't care what the Rimrock Mercantile charges for this stuff,  I'd rather give my money to them instead of this giant corporation."

On the way home, we stopped off at The Merc and picked up a gallon of the emulsion.  It was only 50 cents more expensive than Home Depot.  As we drove away I told Susun, "That's it, I'm not spending a dime at Home Depot unless it's for something The Merc doesn't sell like lumber."  Lately, I've begun wondering what life would be like if all the little Mom & Pop businesses went out of business.  I've been wondering what it would be like if we only had the giant corporations remaining.  I've decided to patronize as many small businesses as possible while we are here in Arizona.  Frankly, I don't care if they are more expensive--we need them--they are part of our heritage and our culture.  The photo is of Tim S. and their famous Smokey, he of the Genus Felineus Retailius.  Smokey is currently trying to learn how to use the bar code scanner. In the meantime, Smokey does a real good job tending the cash register.  I kinda doubt Home Depot would let Smokey run a register there.

After our 3 pm return, I slopped on a thick coat of the emulsion atop the water shed.  Two coats a year is all it needs to remain leak proof.  Then I installed a new chain on the old chain saw.  Houn' Dawg called late in the afternoon to tell us about his reaction to our "surprise."  He turned 62 on Sunday and had been swearing he would buy his federal Golden Age pass the following day.  Before we left Idaho Falls, we went to the Visitor Center and gave them ten bucks to pay for Houn Dawg's pass.  Sure enough, he unsuspectingly waltzed into the VC to buy his pass and they surprised him by saying it was FREE!  Ha, Ha, Ha!  SURPRISE! Welcome to the Golden Age, HD.

We enjoyed a nice campfire last night.  There was not a hint of wind so the smoke rose straight up like those stereotypical campfires depicted in Old West lithographs.  We kept the fire real small.  Most people 'round these parts call real small fires "Indian Fires."  As the jingo goes, "Indian build small fire, stand close.  White Man build big fire, stand far away."  This fire was perhaps the size of a basketball--real small--but if we stood close it did the trick.

It's 11 degrees here as I write this and a few degrees below zero up in Flagstaff.  Interestingly, it's also 11 in Idaho Falls right now.  Late this week, we progged to have daytime highs in the upper 60's, maybe even touching 70.  Our barometric pressure has risen 68 points in a mere 48 hours so the warming benefits of high pressure are definitely coming our way. The little graph shows our last 7 days of temp highs and lows.  Just in case you've forgotten, you can click any small image to see the large version.

We ate at Concho's a few times and liked it, but haven't been there in a year or more. Sorry to hear they're not up to snuff...There's a taqueria in that little mini mart strip mall place at 12th (?) and 89A, I forget what it's called. Pretty good, they have tortas too. Check the lot next to Verde Hay market. There's some folks who set up a trailer sometimes with real good tacos, and another place that serves Hermosillo style hot dogs, bacon wrapped...mmmmmm.