Who'd a thunk it? 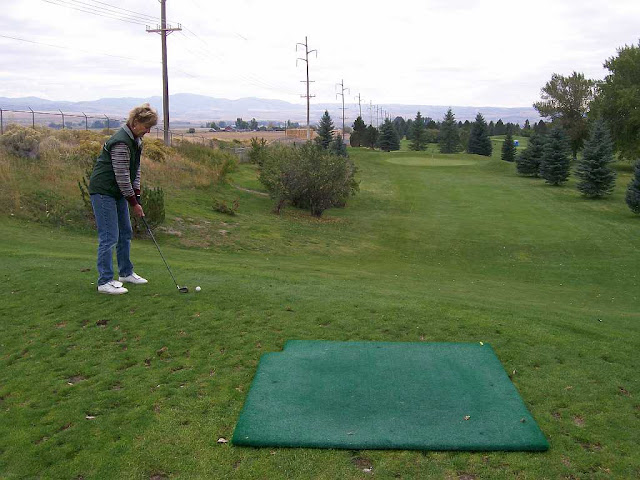 It wasn't all that long ago when I would have said "NO WAY!" if someone would have said we'd both be playing golf together on 10-10-10.  In fact, I suppose I would have bet a lot of money such a bizarre thing would NEVER happen in our lifetimes.  There's simply no way it would have, could have or should have ever happened.  Except it did.  And on 10-10-10 no less.  You wanna talk about an odd milemarker in our lives--well it came to pass in our path yesterday.  Miss Susun and Little Johnny played golf together. (Cue readers' groans, rolled eyes and sighs.)

Susun did quite well and it was a lot of fun.  We both really enjoyed ourselves.  And, guess what?  We're going to do it again.  (Cue readers' boos and catcalls.  Dodge flying tomatoes.) Yes, it's a fun way to spend a couple of hours on a cloudy, cool fall day.  And the cost?  Ten bucks total.  That princely sum included a bucket of balls on the driving range and two rounds on the six-hole Sand Creek short course.  Susun's only instruction was watching a YouTube video of some guy demonstrating how to correctly swing a golf club.  Ya gotta love YouTube, ya know?  Susun was usually on the green in a mere two or three strokes.  Her total score of 35 was mostly due to lack of a putting game.  But, hey, putting's the easiest part of this game to master.  My score was 29 which is pretty much right on my average for the seven rounds I've played there so far.  She could have easily beat me by sinking a few more close and easy putts.  I was delighted to see her hit the ball straight down each of the fairways.  She had some great shots for a first time golfer.  Remember, she's only played the game a mere ONCE in her entire life and that was when she was 17 years old!

It was a great day to be out on the links.  There was a faint mist in the air and a slight breeze made it almost jacket weather.  For the first time, we saw other people on the short course but they were far behind us and so they didn't affect our pace.  The clubs I picked out for Susun last week worked well and are "keepers."  I bought a different pitching wedge for her as well as a second golf bag and so the total investment now for her is $29, including tax.  The "entry cost" for almost all sports is steep, stiff and often scary.  Just think of what it costs to get involved in river running.  Even if you don't buy a boat, your personal gear can run hundreds of dollars.  I wouldn't even want to dare to think of the money we have tied up in camping gear!  Even the "entry cost" of day hiking can be expensive. Think of the cost of a good pair of hiking boots, hiking sticks, day pack and all of the various typical accouterments that go along with that game.

I can't think of any other sport where someone can get started for a total investment of $29, except maybe cribbage.  You might be able to get started fishing with a cheap-o pole and some cheap-o tackle but it would be touch and go stuff for $29.  This particular twenty-nine dollars bought some superb clubs and a Jack Nicholas "Bear" bag.

So, we're off and running now.  We'll always look back on 10-10-10 and savor some fond memories of our first golf game together.  Who knew?

The top photo is Susun at the first tee of the short course and the bottom one is on Tee #4. 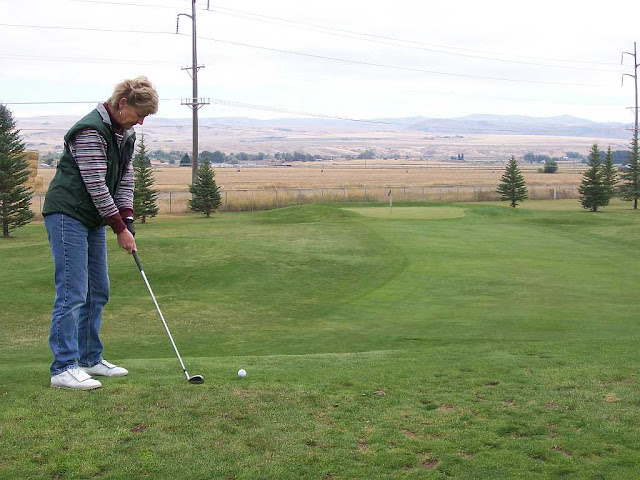 You two need to add a category to your thrift store shopping lists : Polyester clothing.

Susan looks quite comfortable and natural in this exercise. I want to see pictures of John doing this! (cue: applause and cheers from LBR's).

Agree with other comments!! What a great thing
For you guys to do!!!