This guy is Our Hero 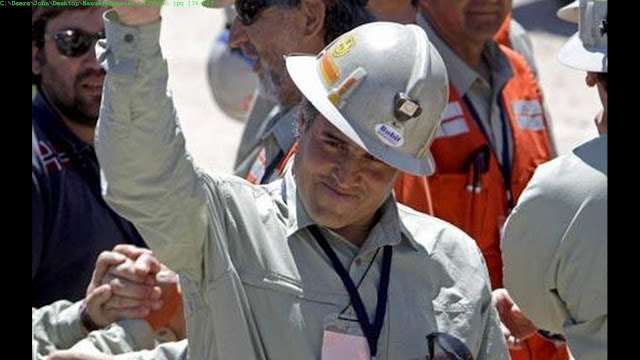 Long before, throughout and then afterwards, we have been trying mightily to glean information about the "who" of who the actual rescuers were.  Who were those incredibly courageous men who went DOWN in that capsule before anyone knew it could go UP?  Strangely, the press has been almost totally silent about them.

Heck, after the 33rd miner was yanked to the surface, we then became concerned for the fate of the five rescuers still down below.  Do you think the press would give us a clue about them?  Hope.  No way.  Out of sight, out of mind.  Well, this was really frustrating.

The day after, we assumed the rescuers had made it out since there wasn't a news item that they had been trapped.  But it was still perplexing since we hold these people in very high regard.  Who the heck were they?  Well, we don't know who all of them were, but we have finally found out about the Main Man and we have now adopted him as our own personal Hero.   This guy has ice in his veins.  Even his wife says so.  She said, "He's a very chilled person." Chilled?  Yeah, I guess you could say that.  It adds a whole new context to the word chilled.

Here this guy has to enter an untested capsule for the first time and drop about a half mile into earth through a drill hole that hasn't yet been "proofed."  Meanwhile, he has to "stand & deliver" for 33 guys who haven't seen anyone else for 69 days.  Meanwhile, he has to coordinate his fellow S&R buddies and somehow keep order and get all 33 men out alive.  Meanwhile, he has to then dispatch each of his S&R buddies up and out of the tomb while he stands alone.  After the last man is gone, it's just him standing down there all by himself.

We sent a message to one of our Dear Friends calling this a classic Search & Rescue Moment that lasts 26 minutes.  He's standing down there all by himself.  The echoes of the miners have disappeared.  His buddies are gone.  It's just him.  Him for 26 minutes all by himself in what could easily become a Tomb For One.  Can you possibly imagine what thoughts must have gone through this guy's mind?

People like this guy are simply amazing to me.  I have no idea how they tick.  They are Superhuman.  They transcend all that I know humanity to be.  I am so in awe of this guy and I wanted to share my feelings with you tonight.  The World is a very special place.  And all of its creatures are very special, too.  But some of them are way more special than the rest of them, just like this "Chilled" guy.  WOW!

Click here for the story.  Enjoy!
Posted by John Parsons at 9:19 PM

Man - you read my mind. I asked that question on Wednesday. How do you think the last guy up must feel? Waiting for the capsule to come back down. What did he have to do to load himself in that capsule, shut the door and rise back up through 15 minutes of being totally alone. Thanks for the link.

I, too, had those thoughts as the rescue unfolded - about being the firs to go down in the capsule and then the last to come up. What passed thru their heads as they waited? How did they feel as it was transpiring? And when it was over - was it happy it was done or sad that it would never be done again?
They were definitly heros in my mind!
Dave E.

AGREED!! the WHOLE thing was overwhelming to me. I couldnt wrap my head around it.