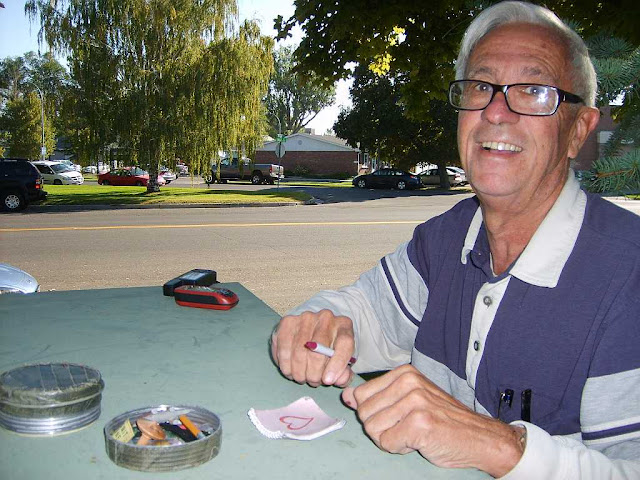 Yesterday marked an interesting mini-milestone--a pebble in the path, if you will.  We found our very first geocache on Friday, October 1st.  The "we" being myself and compadre Terry M, who's internet nom de plume is "asoundbite."  Terry spent his career in radio and TV, retiring as News Director for the local "goto" channel.
He's pretty much up for anything and has a great sense of adventure and curiosity as well as a wry wit and often acerbic tongue. He's also a pipe smoker but I enjoy the aroma of his choice of tobacco.  (Pipe tobacco is generally so much more enjoyable than cigarette smoke.)

Anyway, Terry and I have been conspiring to actually get out in the field as find a geo-cache.  Therein lies this morning's top story: "It's right, where?"  That's the name of our first geo-cache.  You see, when someone hides a geo-cache, they have to give it a name.  All geo-caches have funky names, it's part of the so-called sport.

I'll spare you most of the technical details but, to begin with, we wound up on the wrong side of the river and almost a half-mile away from this geo-cache.  We let ourselves be fooled by some photos that were placed online for this cache.  Finally, we drove to the other side of the river and commenced to start walking around GPS units in hands.  We were convinced the cache was near the river but the electronic compass rosette kept pointing us straight to the Mormon Temple (AKA: The World Largest Bowling Trophy).  We were incredulous as our GPS units had us walking right across the Temple parking lot amid all the faithful LDS heading inside to do their "Temple work."  What the heck?  "It's right, where, huh?"  Finally, both GPS units pointed to some old blue spruce trees near a big electrical box.  So, here's these two old guys pawing around in the shadows of big trees next to the Temple parking lot.  You want to talk about some odd stares?  Yep, we got some pretty odd stares from the formally attired LDS faithful.  It's a good thing none of them called the police.  Finally, I spotted the cache--a small round, four-inch metal can hanging from a spruce limb.  We took it out and arrayed its contents on top of the electrical box, chuckling to ourselves about the oddity of two old guys playing with the plastic tiny dinosaurs that were inside the can.  And they call this a sport?  Anyway, we dutifully signed the teeny little log book, sealing and rehung the can and then strolled off to reconnoiter with the Parks Boss, Dave C.   Both of us came away from this initial experience a tad perplexed.  "It's right, where" was actually an apt name for this cache.  We're both surprised the LDS groundskeepers haven't removed this intruder before now.

We got a little better grip on what Dave C's ideas for a geo-cache project might be after our impromptu meeting.  He thinks he wants maybe a class to teach people geo-caching and he came up with a spontaneous idea to maybe plant a lot of caches on park property to help families learn more about the various parks and recreation facilities.  That stuck my fancy and I later turned in a proposal to organize such a project.  Terry will research the GPS/Geo-Cache education aspects.

Interestingly, my old 1996 Magellan 315 easily outperformed my Magellan Triton 400 purchased a couple of years ago.  I can't hook up either one to the computer and will have to manually input the long/lats if and when we ever decide to go find geo-cache #2.

We went back to the Greenbelt area a little later looking for two art benches that were supposed to be installed.  We could find only one and that won't be good news for Carrie.

We did manage to successfully pack almsot a half dozen boxes of kitchen stuff that's headed to Arizona.  We have a pretty good idea of how this trip's packing will proceed.  Susun motched some great progress organizing the basement and a shelf in the garage.  Her new hairdo looks great! 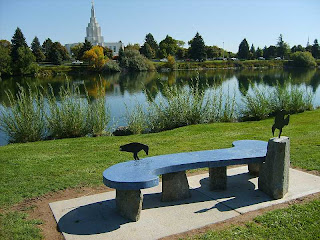 The roofing company was real slow in getting our metal pieces fabricated and I didn't get them home until 4:30 pm so we didn't make any progress on the cook shack.  Now that all the metal pieces are sitting in the backyard, it seems considerably more daunting of a job that I was hoping it would be.  I guess I will have to reach deep and hark back to my childhood Erector Set Days for inspiration on how to put all that stuff together.

Happy Hour was fun and we baked up a real nice pork roast out in the cook shack.

Today's gonna be another medium lazy Saturday--the typical garage sales, Farmers Market and so forth.  A woman might come over and buy the smoker.  Maybe I will dink with the metal roof.  Not much else to report.

As usual, we wish you a Great Day & Many Cheers!  jp