Have you thought recently, perhaps, about how you would dress up for Halloween if you could wave a magic wand and be anything?  Frankly, I haven't given it much thought.  Halloween is mostly for kiddies and Party-Hearty young adults.  Somehow, once you pass a certain unspecified age, the lure of Halloween disappears into the dim fog of blurred memories.  I don't remember exactly when I lost my urge to costume myself but I think it was maybe 20+ years ago.  How 'bout you?  Well, getting back to the question posed in the first sentence, I think I'd like to be Andrew Carnegie for a day.  He was real short like me, actually even shorter than me--about my Mom and Dad's height.  But he sure "cut a number" with his high-heeled boots and trademark bowler top hat. 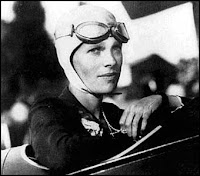 I posed this question to Susun and her first choice was Amelia Earhart!  They do bear a resemblance, eh? You might find the question as to whom you would be on Halloween to be an interesting mental exercise.  Give it a try!

We've resurrected the Geek Weather blog.  LBR Wayne R. humbled us yesterday by saying a post on the weather blog was our best ever.  THANKS, Wayne!  You can click here to go to Geek Weather.

Speaking of being humbled, Kirsty S. is now a follower and Friend of our blogs.  As you know, she's a constant source of inspiration to us.  Whenever we get what's commonly known as "writer's block," we simply go to Kirsty's blog and read her awesome writing and, poof, writer's block is vaporized.  Kirsty can turn even the most tiny little mundane activity into a truly meaningful moment.  That takes true talent.  Kirsty, by the way, has reached the stratosphere of bloggers--she actually got an all expenses paid trip for her Family paid by the Bob Evans chain to report on an annual festival.  Click here to read all about it.  WAY TO GO, Kirsty!

Yes, you read that right.  Obviously, Google News isn't really gone but it's sure goners for us.  We pulled the plug on Google News about mid-week and we haven't looked back with any regrets.  We have absolutely no plans whatsoever to open Google News again.  It seems that during the past few months, the tone and tenor of topics shown on Google News took a turn for the worst.  I simply decided I didn't want to read any more negative news or see negative keywords, etc.  Hey, out of sight, out of mind!  Positive is as positive does!
As you know, we both do our best to keep a positive attitude at all times.  Reading Google News was definitely not conducive to maintaining a positive attitude.  Frankly, what difference does it make to read the latest news?  We might as well wake up and read it in the morning newspaper.  At least our local editors are sensitive to people's distaste of prurient keywords and stories.  We sent the local publisher an email about eschewing Google News and he replied with something like, "Gee, I hope it's the beginning of a trend."  Not likely, but it works for me!

LBR's know I began a search for a clay cook pot quite some time ago.  It's been a fruitless search.  Everyone of them I find has had the suspect lead-laden glaze coating.  Well, we're not risking our health by cooking in anything that can't be proven to be lead free.  As you know, we even bought a clay pot cook book long ago but haven't been able to find a clay pot.  The cookbook is fun to read but it only makes up pine away even more to own a clay cooker.

And then there was yesterday.  So, I decide to finish the late afternoon by a leisurely spin around the local t-stores.  I always finish up at Dee-Eye, the Costco of Thrift Stores.  I'm rambling the normal aisles I peruse and I round the corner into kitchen utensils and--BAM--there it IS!!!  A pristine clay cooker right before my very eyes.  I reach down to grab it and a voice from above intones, "Son, that's MY clay cooker, tkae your hands off it."  I look up, and up and up and atop a 6 foot 8 inch frame is a talking Bubba Head that's missing a few teeth and sporting a scraggly beard.  The face looks like one of those Halloween masks from the movie Deliverance.  I was stunned.  Here was my quest at my fingertips and this Bubba Dude was telling me I couldn't have it.  He was talking into a dirty cell phone as I pondered my options: A) Knock him to the ground and run fast and far with the clay cooker, or B) Offer to triple his money in return for the right to take it to the checkout.  Time seemed to stand still.

Finally, the Bubba Dude clicked shut his cell phone and looked down upon me and said, "My daughter doesn't want it, it's yours."  I was instantly dizzy.  Whew, at least I didn't have to commit Grand Theft Clay Cooker and wind up on the front page of the Sunday paper. I could see the headlines, "Baby Boomer Busted for clay pot assault."

I took my treasure straight to the checkout.  When the clerk reached out for it I said, "Don't touch that clay pot!" I paid my $3.18 and clutched my pot of clay gold close to my heart and darted to the truck to lock it safely away.  I was practically dizzy with the utter enjoyment of sweet success after such a long search for this item.  I had tried everything to find one.  Ebay lists only 4 of them right now and the prices are steep.  A did get a reply to my Craigs list plea.  However, it was a woman who taunted me by saying, "I have two of them and money couldn't pry either one from my finger--you'll never find one, HA!"  No kidding.  Sometimes a Craigs List ad can backfire, you know?

Well, I was a bit dizzy after this little vignette unfolded so I thought I best return to the innards of Dee-Eye and un-stress in the knickknack aisles.   As I strolled out into what they call the yard area, I was once again practically thunderstruck.  Sticking far up and out of the golf club bin was a pristine titanium left-handed driver.  These drivers are from what's called the "Big Bertha" genre.  I actually have one on hold out at Big 5 Sporting Goods but was loathe to buy it new for $35.  They normally sell for upwards of $100 and can go much higher depending on the brand and so forth.  This one was a mere $4.  Wow.  I stood holding the club in my hand.  That's when I knew I better back slowly out of Dee-Eye, turn tail and skee-daddle out of there.  Who knew what might next lurk around some dusty corner of that store?  "Quit while you are ahead," echoed in my brain--"GO!"  So, I paid up and split pronto. Sometimes, those t-store experiences are just so amazing!

Well, here's some good news:  Kate W. hiked from teh North Rim to the South Rim of the Grand Canyon yesterday!  She and her two hiking partners arrived up at the top of the Bright Angel Trail at 12:30 am on Halloween.  That's quite the Trick or Treat surprise, eh?  Congratulations, Kate, we are very proud of you!
Posted by John Parsons at 9:33 AM