Here's hoping everyone enjoys a Tremendous Thursday!  We haven't had much to say the last couple of days but that doesn't mean we haven't been sitting on our hands.

About half of Tuesday was devoted to finishing that golf book.  It was an even better read than I had hoped for.  Susun decided she wanted to go out to the short course with me that afternoon.  It was a glorious day for the kiddie links and I made par on two of the holes.  But the most exciting hole was Number 4.  It has a very elevated tee box and looks directly out at Mount Taylor.  I can't remember which iron I used but the ball lofted perfectly and thumped onto the green and rolled to within 3 feet of the pin.  I really put a lot of time into that putt and was rewarded with my first "eagle" of this reincarnated golf phase of our lives.  Not only did I get an eagle but also a congratulatory kiss from My Sweetie!  How great is that? My total score was the lowest of the six rounds I've played there so far.  Once again, there was no one on the little course.  It's amazing to me that it's only $3.25 to play the thing.

Susun loved the outing and began making statements that sounded like she might want to actually play golf there, too.  She said she would borrow some clubs to check it out.  Well, that got me to thinking, which as you all know can be a dangerous thing.  So, after our jaunt to Sand Creek, I decided to hit the t-stores and see what kind of clubs were available.  Being left-handed means there's almost NEVER any clubs available.  But she's normal--right-handed, I mean, so there's a TON of clubs from which to choose.  After only an hour of rummaging hither and yon, I had a full set of clubs for her--all the irons, incredible drivers, a fancy putter and two wedges for a mere $22 including sales tax.  About half of the clubs have graphite shafts.  The drivers are all composite metals and include one of those huge-headed ones that sell for ridiculous prices.  Buying all Susun's clubs at retail probably would have cost hundreds of dollars.

After returning home, I gave her some wiffle balls to knock around the back yard.  On only her third stroke, she lofted a perfect ball toward the back alley.  So, I asked when she last played golf.  Well, as it turns out, she's only played golf ONCE in her life!  Once.  So, I asked how it was that she had a perfect grip on the club.  And she nonchalantly replied, "Oh, once you learn something like that, you never forget."  Oh, really?  Do tell!

Well, I decided right then and there that this girl is gonna have some honest golf lessons from a real pro.  She's got some awesome potential.  I kind of have a hunch that golfing to Susun is kind of like dancing.  Susun could have been a professional dancer, she's incredible.  I'll betcha her golf swing is gonna be danged near perfect after she gets a real lesson or two.  Yesterday, I found a pristine Jack Nicholson golf bag for $5 so now we have all our clubs organized and ready to go.  We've turned the new 87 Zuki into a real spiff street legal golf cart and I suspect we 'll be spending a pretty fair amount of time out at the short course until the weather truly turns gnarly.

Things took an odd turn downhill Tuesday night.  Just before bebby-bye time, a sudden pain engulfed my left leg and I could barely walk.  I hobbled off to bed and couldn't sleep most of the night because of near acute pain.  I got up at 4:30 am.  Hobbling into the kitchen to make coffee seemed like a two mile hike, it was very difficult and painful.  I was filled with dread.  What had happened?  Was it a vascular problem?  Had I somehow popped a tendon or ligament?  Geeze.  I kept a real positive attitude about the sudden problem and kept trying to work through it.  A few hours later I could tell it had to be centered in a larger tendon and with a variety of stretching, much soaking in hot water and some exercises, it subsided and this morning, I'm back to normal.  During the episode, I kept thinking, "It is what it is."  I'm sure glad I can now reflect on the phrase, "It was what it was."

Most of yesterday morning was all about the 1991 Zuki Sidekick.  It's now totally cleaned out and has a fresh oil change and is ready to hit the road to a new owner.  We even found the title.  We've dropped the price $350 and it's only a matter of time until someone comes along to show me the money.

A big chunk of yesterday was consumed with watching weather down in Arizona and chattering with The Goatherder about the tornado warnings as well as actual tornado damage itself.  It was truly a historic, wild, wacky, destructive and vicious weather day there.  It's a day that will be talked about probably for at least a couple of generations to come.  Fortunately, our Arizona house escaped unscathed, except for all the rainfall, of course.  Now, we are guaranteed to have one giant weed crop when we arrive back down there 4-6 weeks from now. 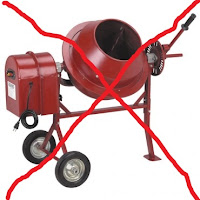 Late in the day, we made some key decisions about the design and dimensions of the west porch overhand.  We then began digging the first hole for the foundation for one of the two upright posts.  It's amazing how much easier it is to dig a hole when one is using a $53 post hole digger.  Frankly, I didn't think there would be much difference between post hole diggers.  But I was wrong, as usual.  A high quality tool almost always makes a job easier than a low quality, cheap-o tool.  By the end of the evening, I also convinced myself to buy a cement mixer from Harbor Freight.  That's a BIG leap for me--buying a cement mixer.  You can click here to see the one we going to buy today.  Be sure to read the reviews and then you will know why I want one.  The cost of the mixer will actually be $125 because of their perennial 20% off coupon.  Also, we're going to take it down to Arizona because it's now obvious we need to fence that property.  My days of hand mixing concrete are officially over! There's two other benefits of buying a mixer: A) The cost of the mixer is a lot cheaper than the cost of "fixing" a wrenched back or suffering another herniated disk.; and B) the mixer is going to make construction of an Arizona earthen oven SOOO much easier and more fun.

Well, you can scratch off that mixer!  I went to Harbor Freight and decided the dang thing is a toy and a cheap toy at that.  We're gonna rent one here in town and get the job done RIGHT!  Even though we love Harbor Freight, NOT ALL of their stuff is worthy of purchase.  Some of it is downright junk and the mixer clearly meets that description.

Dear Friend Sue K. back on the Western Shore of Lake Huron yesterday sent along some sage advice on pierogies.  Her short email is enough to make me want to make them today:


"Pierogie's are my favorite and my family has made them every year since I can remember.  We use flour, eggs, milk and salt.  Sometimes we add sour cream to the dough.  Mix it up and then roll, roll, roll, roll until very thin.  It stretches and shrinks and stretches and shrinks.  Keep at it.  Fillings:  My favorite is farmers cheese, egg, sugar and cinnamon.  Another favorite I invented is spinach, mushrooms, and farmers cheese.  Some others are blueberries, apples, and an old country favorite is cabbage and sausage with onions.
After cutting and making into either squares or triangles, place in boiling salted water and cook about 5 minutes.  Remove, drain, place in a dish with lots of butter and keep filling it up.  Then the next day, put more butter into a pan and then fry to warm up.  Yummy.  Enjoy."  THANKS, Sue!

Oh, another item--the replacement hose for the smoker arrived via FedEx yesterday and it was a breeze to install it.  The smoker's ready to go back up for sale again.

OK, what's with the blog post title "10-7?"  Well, of course, it is October 7th but there's more.  Each early October the numbers of the days get me to thinking of the famous "ten codes" that are the icons of CB radio fans (Think Smokey & The Bandit).  Ten-seven means "out of service."  So, I guess I'm going 10-7 now. Roger, Good Buddy.

PS--We received an overnight note from the hinterlands regarding our blog title.  It called our attention to the different nuances of the words in our blog description.

Hum..after much morning deliberation, we're going to continued using Nouns instead of Verbs.  The act of writing itself implies the verb usage.  However, once it's written and sitting here, it's just a bunch of nouns in run-on sentences hanging around together.
Posted by John Parsons at 6:00 AM

Pierogies are an awesome food for sure. I like em with onions, cheese and potatoes in them.

In my experience building fence, I've come to the conclusion that concrete pretty much guarantees you will be replacing the posts in 10 years or less due to rot. The fence I just built with my neighbor is simply bedded in gravel in the bottom of the hole and then backfilled with the dirt and tamped in very well. The fence we pulled out was there for 55 years and there was post damage, but not rotted out. It was redwood or cedar. And no concrete.