It's so wonderful being back in Idaho today! You have no idea how wonderful it is unless you live here. It's even MORE wonderful being back in Idaho after you have been through Utah's Salt Lake traffic gauntlet twice in one day. Trust me, Utah is a Beautiful and Wonderful State but the drivers in the Salt Lake metroplex are totally crazy and it's like completely off the wall there. WOW!

Anyway, I did the "sleep test" on the Zuki and decided to buy it. So, I started packing at 6 am. I thought of all the contingencies and so forth and packed WAY too much stuff. Three tool boxes. A total camp rig. A cooler full of food and beverages. The Snack Box. The laptop. Cameras, chargers, you name it, I packed it.
By and by, I was able to leave the house about 8:15 am and go on I-15 at 8:27 am. Who knew there was such I-15 mayhem between here and Pokey? WOW! The Bingham County People are totally nutso--they drive like race car drivers.  They are not as bad as Salt Lake driver but close. I felt lucky to survive my drive this morning and I hadn't even entered Utah yet. After Pocatello, the craziness disappears and life is good. I really didn't have much angst about traffic until the I-215 loop rejoined I-15 south of the airport. That's when people really amped it up again. Geeze. Here's this 24 mile long construction zone and the speed limit is CLEARLY posted 55 mph with many signs saying fines are DOUBLE for speeding. DOH. Nobody paid a speck of attention to these signs and they were speeding like you wouldn't believe. Well, I didn't want to get a ticket so I kinda kept it "close" to the posted limit, driving 60-62 most of the time. That really annoyed the Salt Lake drivers and I was tailgate bait Big Time. It was real annoying but what can I say? I try to obey the posted laws.

Meanwhile, I showed up @ 1:05 pm at the seller's mini-mansion in a very valuable niche neighborhood of Springville. Who knew Springville harbored an enclave of such high dollar houses? This guy had it all--quads every which way, wave runners, a 30-foot cabin cruiser, Harleys here and there, and various trucks and Jeeps draped about the property. Luckily, he was a very nice person and quite helpful.

He confided in me that I was "right," he should had priced the Zuki at least $500 higher. That's what I told him the previous evening. Fortunately, he honored his word to sell it it to us for the posted price.  He said he was doing so because he knew we would treat it the way it should be treated. He sure had that part right.

Once I was all paid up, title-equipped and hitched we headed off for the Wild Blue slight after two. After refueling, I hit the mano-y-mano Fast Lanes of I-15 at 2:20 pm. What can I say about I-15 in the SLC Metroplex? It's basically a NASCAR race. I really felt today like "tradin' paint" with some of the other drivers I was racing with. Geeze! Even the semi truck drivers seem to lose all common sense when they drive I-15. I looked back in the mirror once and a semi was six inches from my left side. Oh, doesn't that send a warm and fuzzy feeling through thy body and spirit? I had this one Yahoo driver who was simply enjoying the pleasure of DRAFTING my rig. As nearly as I could tell, he hung out a few inches behind the Zuki and merrily cruised along in his beat up old pickup.

The funny thing about the Salt Lake area is that the people there (and throughout Utah) are very nice and polite when they are not in their vehicles.  We really enjoy the people and places of Utah--it's a great state.  Somehow, though, when people who live in the Salt Lake Basin get behind the wheel of a vehicle things change dramatically.  It's a real Jekyll-Hyde thing.

I was able to exhale, as usual, when I finally passed Mile Post 357 at Willard Bay. Yes, the traffic is still substantial but it seems to lack the sense of random craziness that the traffic south of there has. After Tremonton, all was OK. I encountered a nice thunderstorm from Malad to McCammon. Lightning was spiking down on the mountains and the rain came in vertical sheets. It was delightful and refreshing and very fitting for re-entry to Idaho. Oh, how good it feels to be back in The Gem State. Say what you will about Idaho but it is a very SANE place to live, traffic-wise. The greatest value of Salt Lake traffic is that it makes Idaho traffic look sedate and sane! Thanks, SLC Drivers!

Well, here's some photos. They are pretty self explanatory. Maybe I will add some descriptive comments tomorrow morning. I've driven 560 miles, 100 miles more than the distance from Flagstaff to Los Angeles (464). And half of those miles were TOWING something. Yikes! I'm tired. Have a great night & Cheers! jp

PS, I finished editing (sic) this post and looked up at the clock and it's precisely 24 hours (9:15) since I "discovered" the listing on KSL Cars for the Red Zuki.  My, my, what a lot of stuff can transpire in a mere 24 hours! 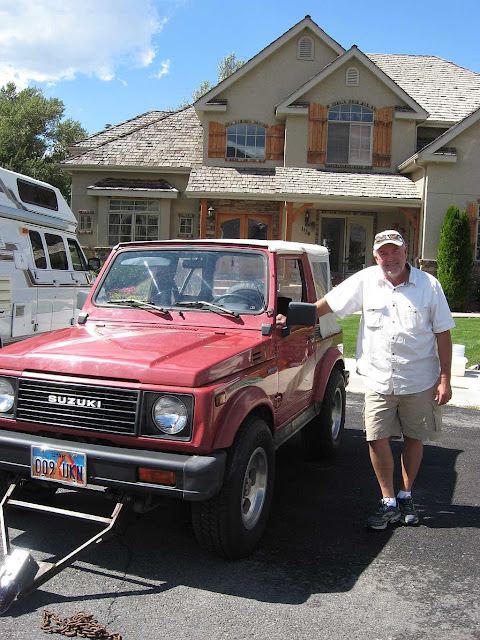 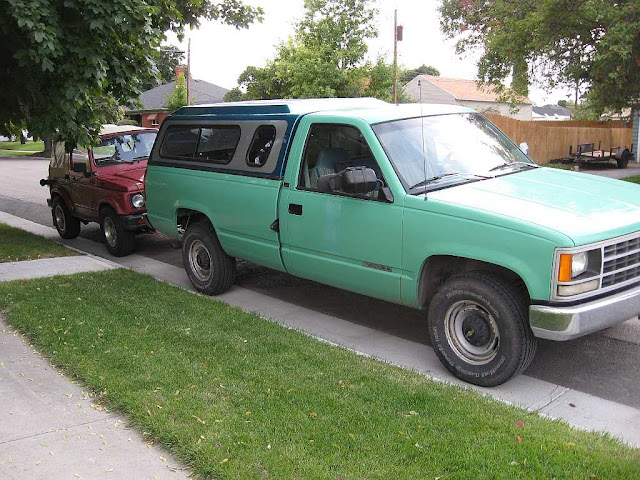 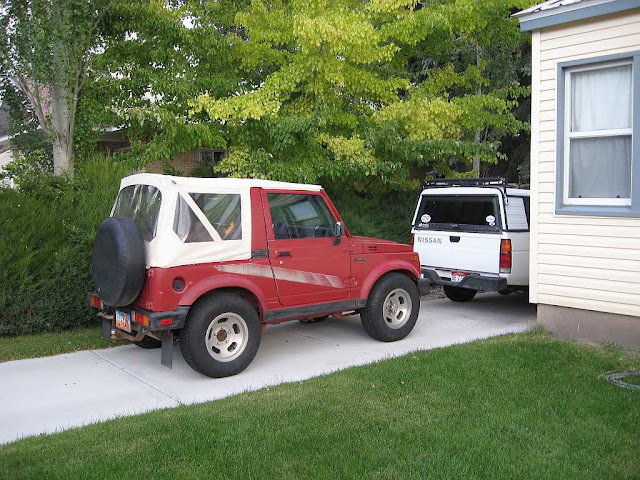