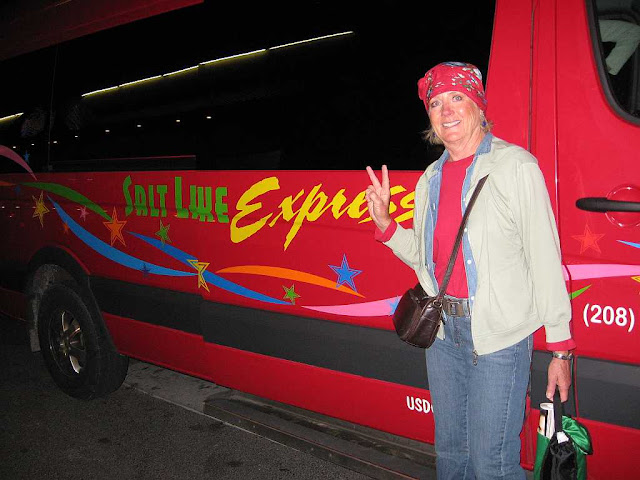 We both arose at 4:30 am.  Susun's Salt Lake Express shuttle leaves at 5:40 am so we generally get up an hour earlier when she's heading to the airport.  Yes, there's a nice airport here in Idaho Falls with regular jet service to Salt Lake City.  Trouble is that it costs a fortune to fly to SLC whereas the shuttle is only $82 round trip.  Susun enjoys the four hour drive time so it's a good deal for us.  She will get into the airport about 9:30 this morning and then fly out about 11:15 and arrive in San Diego a couple of hours later.  Since the California time is different, she gets in there a little after noon.  Sarah, Gage, Van and Stasea will greet her at the airport and the Good Times will commence.  It's Van's very first birthday and the family will throw a big party for him tonight.  You can bet your digital bippy that Susun will return with a boatload of photos of smiling faces and Happy Babies!  Susun's been progressively more bubbly as this trip has approached.  In hindsight, the bad weather in the Tetons did us a favor.  She really needed an extra day to prepare for departure this morning.  She was so focused on her trip prep yesterday she didn't even leave the house once.  That's downright rare and unusual.  Susun's promised to send digital photos via Sarah's iPhone during this trip.  Hopefully, we will post up a series of such photos here on the blog.  Maybe she will even send an email or two.

While she's away, I have a long list of projects to commence.  Also, we will be putting far more detail in each blog post than what's been normal lately.  Why?  Well, Susun like to know what I've been doing and it's a whole lot easier for her to read about it on Stasea's iPhone than for me to repeat it over the telephone.

Let's switch gears here.  We have a real neat story to tell this morning.  It involves our Dear Friends Goatherder, Kate and Josh down in the Verde Valley, Arizona.  Goatherder is also an LBR.  Well, Josh has been working for a couple of years at a small retreat-style place's restaurant near their home.  Josh is a Senior in high school now and you know how important cash flow is to teenagers.  Anyway, Josh decided he wanted to upgrade his cash flow so he applied to be a bus boy at a kinda upscale burger place in Old Town Cottonwood.  He was accepted there and the employer told him, "I'll call ya when I need ya."  Well, time passed and no call came.  Josh became a wee bit antsy about the lack of a call.  Meanwhile, Kate was dining in an upscale bistro in an area of Sedona called Village of Oak Creek. It's near where we get our mail when we're in Arizona.  She got wind of an opening in the kitchen there and told the chef about her son's situation.  The chef said, "Send him right over."  He hired Josh on the spot and offered him a chance to actualyl becoem a Sous Chef the following day.  However, he said, "You have to get you own set of knives."  You know how upscale chef's can be about such things.  So, Josh rushes home to share his plight with his Dad, Goatherder.  Meanwhile, of course, Goatherder was deeply involved in the upscale restaurant industry in the Phoenix area and nearly became a full time restaurateur before deciding on a career as a teacher.  Goatherder smiled and pointed out to Josh the large collection of vintage chef's knives on the wall.  Problem solved.  Here's the neat part:  Goatherder actually let Josh use the very same knife that Goatherder himself had begun his own restaurant career with over 30 years ago!  Like Father, Like Son, eh?  Anyway, Josh is now immersed in the "backshop" part of fine dining and undoubtedly having a ball.  I joked with Goatherder yesterday that Josh is probably the only entry level employee who shows up to work in his own Mercedes!  You can click here to visit the restaurant.  And if you want to read reams of glowing reviews, simply Google "Fork in The Road Bistro Sedona."  Way to go, Josh--we're proud of you! (Below are Goatherder (left) and Josh.) 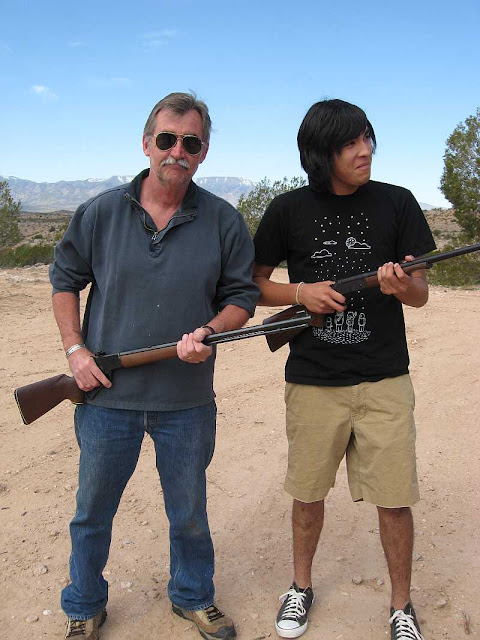 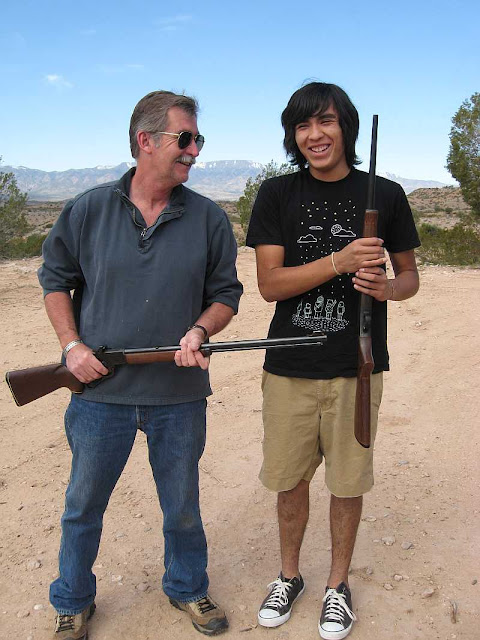 What a great story

Aw shucks, it's just an old knife....but I'm proud to say that he cut himself with it the first day...the apple don't fall very far from the tree!