No Sit in Sat (urday)

We reckon to be hoppin' today--there's all kinds o' stuff a cookin' round about these parts.  We're definitely going to both Farmers Markets.  That's a given.  We're definitely doing a Greenbelt Walk.  That's a given.
The local power company is having their annual Open House.  Check, we'll be there, too. (More on that later.)  There's over 60 yard & garage sales happening today--we'll stop at a few of those, too.  It's National Alpaca Day today and there's an alpaca farm having an Open House--we hope to be there as well.  Meanwhile, we'll squeeze in our daily t-store visits.  Susun will spend time in the basement and I've got a couple of Zuki projects on tap this afternoon.  If that's not enough fun, we'll unpack and fire up our new Monster Leaf Sucker.

Hey, we got a bonus gift last night.  Yep, the publisher of our local daily newspaper gave me permission to use one of his personal photos on the Snowbird blog.  He even thanked us for using it!  It's not just ANY photo, mind you, it's a SPECIAL photo near and dear to our hearts and minds.  And not only that, it's not just a photo embedded in a blog post, it's the brand new banner heading photo that sits atop the whole shooting match.  You can click here to see it and you'll instantly know why it's such a bonus to have permission to use it.

A Tale of Two Trails

I love to get up about between 5-6 am and hang out reading various online news items from around the West.  Today, I had to chuckle at the irony of these two trails.  One trail is up in the hustle-bustle Salt Lake City area and the other one is in Prescott, Arizona. (Remember, Class, Prescott is pronounced 'PRESS-kit.'  Let no hint of a sleeping cot fall from your lips when you say that word!)

Exhibit A is from the Salt Lake paper's story:

"The ceremony marked completion of Phase 3 of the Parleys Creek Corridor Trail, a major milestone in a two-decade effort to connect the Bonneville Shoreline Trail on the east with the Provo-Jordan River Parkway on the west. The 1.3-mile segment of the trail cost $2 million."

Exhibit B is from the Prescott Daily Courier's story:

"In the current economic downturn, he said, the trail work is occurring mostly through the efforts of volunteers. The new 2.9 mile Willow Loop Trail, for instance, cost only about $40, because the labor and most of the materials were donated."

Neither dollar amount is a typo.  'Nuf said.

We got a real LOL out of another story this morning in the Salt Lake Trib.  There's this
"pole-lig" family that's supposedly airing it all out for a new TLC reality TV series.  This guy has three so-called "sister wives" and a fourth woman is being courted.  (Note, we and a lot of others we know call the polygamists "pole-ligs.")  Well, the review of the new series notes it's not real high on drama.  Apparently the most dramatic thing that happens in the premier episode reviewed is that two of their 13 kids lose a tooth on the same day and Christine burns the toast.  Meanwhile, the writer wraps up the review by observing it's really not much different than a normal monogamous marriage, "It just involves a husband who has to remember a lot more anniversaries."  Uh, huh.  You can click here to read the full monte.

Polygamy isn't exactly rife in Utah and Idaho but it's a lot more prevalent than most people realize.  Pole-lig households stand out like proverbial sore thumbs.  It's always the huge Motel 6 sized homes that are the giveaway--that and enough kids to field a football team--and the cars in the driveway--oh, so many cars. 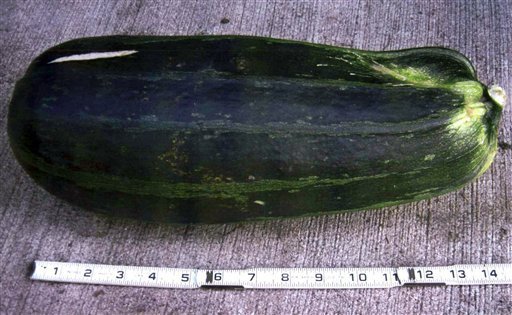 Since we're into news this morning, we want to share a Veggie Tale.  Apparently, pepper spray isn't the only bear deterrent.  Any old garden variety zucchini will do.  That's what this sheriff's office evidence photo shows--the famous zucchini that scared off a bear.  The internet's full of it this morning--the zucchini story, I mean.  Rather than give you one link, we're recommending you use this phrase in your Google News search: "frenchtown montana zucchini"  (Without the quote marks, of course.)  Prepare to be amused.

Down in The Arizona Republic, I found an interesting feature story entitled, "10 steps to creating ultimate man cave."  Well, that caught my attention so I read the story.  One of the tips the author gave was this tidbit: "Write down everything you want to do in the room," noting that, "The better you plan, the happier you'll be with the result."

Well, naturally, that got me to thinking which can be a dangerous thing to do before sunrise.  I got to thinking how I should write down what I want to do in my cook shack (AKA: Man Cave). Hum...let's see, here goes:

OK, now that I have a plan, does that mean I will be happier with the result? 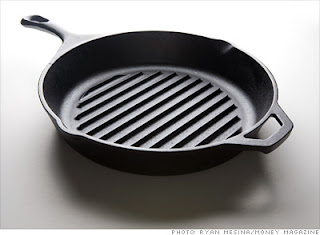 Hey, speaking of cast iron toys--we have a closing note here.  We were roaming the aisles of Dee-Eye (AKA: The LDS Deseret Industries t-store) and our eye caught a microscopic hint of a glimpse of something special.  It was quite literally BURIED under a pile of worthless lids for various pots and pans.  Something about the coloration didn't match.  The teeny little thing I could see was black, not the color of oxidized aluminum or dirty stainless steel.  So, I pawed through the pile of lids and, LO!  A huge cast iron grill skillet appeared.  This is no ordinary cast iron skillet.  Nope, it's a made-in-America Lodge skillet and the bottom of it has all those raised ridges with which to perfectly pan fry pork chops and other similar cuts of meat.  WOW, I could hardly believe my eyes.  It's identical to this picture and it's priced online at $30.  At the local Sportman's Warehouse it's $35.  I got it for $3.  (Cue the Latin American soccer announcer shouting "GOAL" at the top of his lungs.)  If that wasn't enough, I found an antique Favorite Piqua Ware #3 cast iron skillet, too!  You can use the word "Piqua" to find a lot of antique cast iron items from this company on eBay.  Yes, it was yet another good day at the t-stores.

You shoulda put a pic of the old Piqua up, that was the real score...does it have the raised fire ring on the bottom? You bet we'll burn that Monkees whole album into MP3's when you get here. I am slowly ressurecting myself this a.m....winefest posts will come soon...