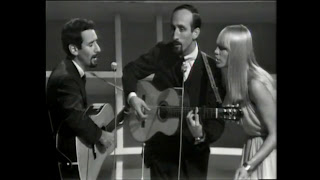 Somehow this morning my thoughts began to wander to that old tune by the ancient Pre-Cambrian group called Peter, Paul and Mary.  I put their photo here to remind us all what a rock group looked like in 1966.  Well, maybe they weren't a rock group but, whatever, they were at least avant garde.  You know, kind of maybe beatnik-ish.  Patrons of those scandalous places called COFFEE HOUSES probably listened to them!  Eeee-gads!  Well, as some of you older folks know, PPM had a tune called "Monday Morning."  I dug up the lyrics for it but it's not at all what I thought it was about.  It's actually about some Sweet Sixteen lass who wants to get married.  It has nothing whatsoever in the lyrics that would be relevant to my high esteem for the uselessness of Mondays in general.  But it's been fun to roam the dust bin of 1960's music history.  Gee, PPM look positively conservative by today's standards.  They could be playing at church picnics now. (You can click on the small photo to see the full screen capture I did from one of their music videos, such as it was.)

Well, anyway, it's Monday once again.  Another day, another carbohydrate, eh?  Today's going to be fairly busy at least for this Old Codger.  We have the monthly Parks & Recreation Commission meeting at high noon over near the airport.  I'm on the agenda at the top of the batting order to give a rather lengthy report on the Greenbelt Art Bench Project. Carrie had an unfortunate mishap--her mare kicked her and broke her elbow.  She's slated for one her many medical followup appts. today, so that means I am winging it alone on the topic.  Carrie's done some pretty amazing stuff on this project.  The benches are scheduled to be installed in a media event the day Susun gets back from San Diego, September 21.  There will no doubt be a lot of city dignitaries (such as they are) on hand to smile for the cameras and maybe some speeches and so forth.  Today is the day we update the P&R Commission members on  all aspects of this project and forthcoming events and plans.  That means I have to be at the top of my game today and 3+ hours seems a bit short to prep for all this stuff.  Ah, well, at least it will keep this Old Energizer Bunny hopping.

Yesterday, we actually logged a few hours of manual labor.  We typically avoid manual labor at this point in our lives, unless it involves rigging or derigging a campsite or maybe paddling 21 miles in a day.  But good Ol' Manual caught up with us yesterday.  We eliminated ALL of our hollyhocks from their anointed resting place.
If you've ever messed around with mature hollyhocks, you can sympathize with this task.  It took a big chunk out of the day and prevented me from goofing off at the golf course or paddling John's Hole or riding a bicycle someplace.  It was Little Johnny versus the Holly Hocks.  Well, they are all gone now and the area has been raked and cleaned and only a discerning eye would know they were ever there.  Their stalks and seed heads are now securely tied up in four large bundles awaiting trash pickup tomorrow morning.  Those plants are pretty to look at all summer but someone has to pay the price to deal with them before their seed heads shatter and spew forth yet MORE holly hocks.  They are prolific, tenacious and invasive.

We also went on a quest to find more lawn fertilizer.  You would think it would be readily available but Noooo.  You would be wrong.  Everyone theoretically needs to lay down some fertilizer on their lawns while they are still growing before the dormant season sets in.  This helps prep the grass roots for the rigors of winter survival.  So, you'd think lawn fertilizer would be everywhere right now.  You'd be wrong.  Luckily, they still had a few bags left at the local farm store.  We had already put down a light fertilizer before the Jenny Lake trip but the backyard didn't seem to respond so we gave it another, heavier dose yesterday.  Today we will mow the front yard, too, and continue giving everything a really deep soaking for the cold months ahead.  The dormant season can come early here--one never knows.  During our first winter here 3 years ago, it hit with a real bang on October 4th.  So, lessons such as the 2007 storm stick in our brain and we get after this stuff early now.

OK, what's on tap out in the Courtyard Grill?  We'll be baking that fat chicken today and we'll probably roam the groceries for other stuff to smoke, saute or bake, too.  You can bet we'll post up a pic of the chick(en) when it's coming out of El Turco.

The other big project for the day is to begin to put a new roof on my cookshack (AKA: Guy Cave).  As the less hospitable weather approaches, it behooves an outdoor cook to tend to his safety zone--the cook shack.  There's no point in cooking inside that small shack when the weather is nice, but, trust me, when the going gets tough, a cook shack is a mighty handy place to hang out.  You can be dry and it can be blowing 30-40 mph and you don't care because you're inside your little cook shack.   It will probably take all week to get a new roof on the tiny structure. Below (left) is the "before" photo.  The photo at right is a closer view of the straw knife that Goatherder bought in Pine, Arizona, and presented to us in 1994 when our straw house was nearing completion.  Thanks, GH, that's a Life Legacy Artifact and we will treasure it always.  Some more comments appear below the photos. 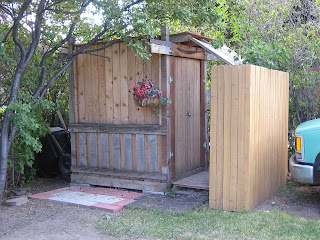 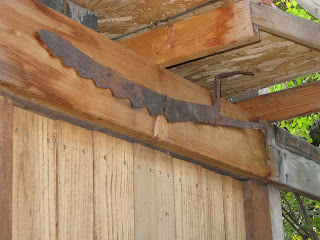 In closing, we want to thank Stasea again for her sending photos of herself, The Boys, Mom Sarah and GrandMa Susun.  We look forward to creating the "Day #3" blog post later this fine Monday.  Keep 'em coming, Stasea!

PS--The P&R meeting went great.  I passed around copies of a 3 page report that had a narrative, a spreadsheet and a print of that artist's comment which we put on this blog a week or so ago.  Everyone was very supportive and I was pleased.  Now, the next event is the September 21 installation and dedication.
Posted by John Parsons at 8:58 AM