The Kiss Of Q 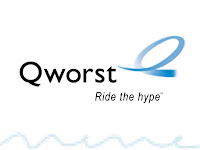 I thought I was all said and done with Qworst after they couldn't find Idaho Falls.  Yes, I knew we had a Q account for internet access in Arizona but it was safely on "suspend" and the minimal $10 monthly payments were being automatically taken out of a checking account.

Today, I rec'd the first piece of mail I'd seen from Qworst in months.  It was a disconnect notice.  If I didn't pay $56 by today, they'd pull the plug on the Arizona dormant internet account and then have a license to charge an arm and leg to reconnect it.

What ensued was a classic tale of Man Against Qworst.  I was on the phone for well over an hour and talked with not one, but four CSR's (AKA: Customer Service Reps.).  It was wildly frustrating to the Nth degree.  I can't even begin to describe to you the Little Shop of Billing Horrors these people put me through.

The first CSR was over in Mumbai (AKA: New Delhi, India).  I wound up calling him an Idiot and hung up.
The second one was maybe on Prozac or Darvon, she was really kinda of stoned out and not much in touch with the same reality I was experiencing.  She said, "Wow, that's weird" several times.

The third CSR was a black woman and she was so intrigued by my case she said, "I've never seen anything like this, I need to talk to my Supervisor."  Mind you, it wasn't ME asking to speak to the Supervisor--it was HER!  While I was on hold with the 3rd CSR, the 4th CSR came on the line by accident.  I had to start all over again explaining what I had already explained.

Well, it turns out that they had made some crucial billing errors and also had been using the wrong zip code in mailing our bills.  That's why we never received them.  Meanwhile, they realized THEIR error in July and then charged ME (and a lot of other people) to make up for their mistakes.  The last CSR clearly emphasized this point.  It was easily one of the worst nightmarish billing problems I've had in many a year.

The 2nd CSR said I was going to have to call Mumbai back to solve the issue.  I told her that if I had to call Mumbai, I didn't care if they disconnected me and/or sued me or ruined my credit either.  I said there was no way on this earth I would ever talk to Mumbai again.  That's how I wound up talking with the black woman who had an attitude.

Meanwhile this guy I got--CSR #4, actually turned out to be a real person.  When I told him what a bunch of worthless dirt bags they had outsourced to in Mumbai, he was positively giddy.  He said, "I love it when people badmouth outsourcing!"  I kid you not.  Anyway, he did a really good job and had me laughing and even got me to ENJOY paying my $56 by clearly explaining the insanity that had taken place, even though it was not my fault.  You simply wouldn't even believe the crazy, convoluted conversation we had to endure to listen to the circuitous comedy that generated my disconnect notice.  Anyway, I told him I would happily say nice things about him to his Supervisor and, at first, he encouraged me to bad mouth outsourcing to India but then he said, "You better not do that or I will get fired."  I zipped my lip on that one.  He was a good guy and I'm fortunate to have ended this sorry episode with a good guy.

When it was all over, I was exhausted and limp as a overcooked noodle.  It was all I could do to go try to recharge at Harbor Freight and the WINCO Spa & Relaxation Center.

Luckily, all four of the CSRs knew where Idaho Falls was located and we didn't have to engage in any ludicrous charade about playing the "Where's Idaho Falls" guessing game.  I am still really feeling wrung out by this bizarre set of circumstances so I'm going to bed early tonight, probably at least 2 hours earlier than normal.  Whew, what an experience!

On one other note, I notched another project chapter with regard to the Zuki.  You can click here to read about it.