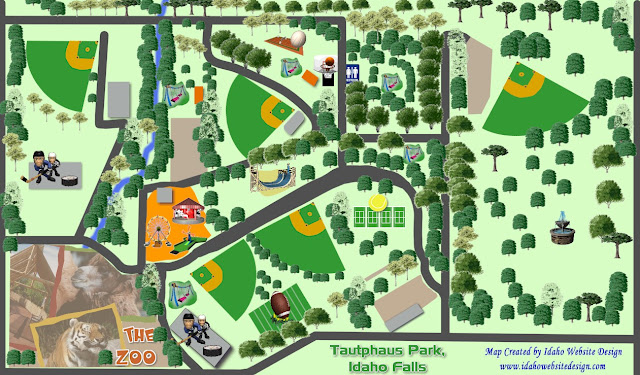 That's right, at 10 am, we're going to the dedication of a bust of Mr. Tautphaus. He was the kind of pioneer we really revere. He actually built a huge 80-acre private park here in Idaho Falls more than 100 years ago. It had a lake, a racetrack and all manner of ways to relax and unwind. Not too many people were "thinking parks" way back in the day. When Tautphaus grew old and passed on the place fell into disrepair. The City of Idaho Falls picked it up 75 years ago and, well, you get the picture. Today is the 75th Anniversary of City ownership. The city popped for a bronze bust of Mr. Tautphaus. Plus, there's major Hoop-dee-doo going on at the park all day. Over the generations of city ownership, Tautphaus has really become one of the city's major gems. It would take way more than a blog post to list all of the great stuff located there and the things that take place there. Click here for a private sector website that gives a pretty good overview of the park's features. It's a fabulous place, even though the lake and racetrack are long gone into the dustbin of history. We tend to use Tautphaus more in the winter when the city grooms cross-country ski trails there. Since we're on the city's Parks & Recreation Commission, we are "expected" to attend this morning's event. But, we'll tell ya, we'd be there even if we weren't on that Commission. It's the type and kind of event that we really love--a city celebrating its recreational heritage.
We are indeed VERY happy to be in town today because we don't want to miss this for anything.

We won't be able to go to the Bear Awareness thing in Island Park today. It's also being staged at 10 am. We didn't wind up camping much in Bear Country during the second half of our summer. If not for the BLM river guide project, we probably would have spent a lot of time up in Island Park. We're pretty much stopped updating our Bearanoid project. It's just too depressing to write about bear-related fatalities.

Susun will be real busy today. As you know, she's a volunteer for Habitat for Humanity. The Director of the local chapter calls Susun her "best volunteer."
Anyway, Habitat is having a dedication and Grand Opening for their new "Restore" today. It's the proverbial quantum leap for the Restore. It's now in a much larger space in a much better high traffic location. Habitat generally builds only one house a year here. They hope increased income from the new Restore will let them ramp up to four homes a year. When we were looking for a home here in the summer of 2007, our paths crossed a Realtor, Karen L. When we learned that she was Secretary of the local Habitat Board and had been closely involved with Habitat for more than 10 years, we signed an exclusive "buy's agreement" with Karen. She was the one who negotiated such a great deal on the place we now call home. Well, Karen's not your ordinary Realtor. Anyway, time passed and now Karen is Executive Director of the local Habitat chapter. She's doing great things and Susun is delighted to be able to help. Today Susun will organize the Grand Opening luncheon and be the Event Photographer.

Speaking of the Summer of 2007, tomorrow marks a milestone of sorts--it was my first official paid day on the RSVP job. That's right: August 22nd. I gotta admit that three years ago today, August 21, I sure wasn't in much of a mood to go to work the following day. It was an interesting 2.5 year interlude but I sure am glad we are free again of paid employment. However, the RSVP position really did open a lot of doors and help create a new life for us here in Idaho. We certainly wouldn't be doing the BLM river guide project or spending the week in Salmon City if it wasn't for RSVP!

Speaking of the river guide project, we're leaving tomorrow at 2 pm to head north back to Ellis to resume our field work on that project. We should be all set up in camp by 7 pm tomorrow and we will hit the river running early Monday morning. Heck, it might even be a deja vu day, too. We will probably be in Salmon City not once but twice Monday and then again twice on Tuesday. Hopefully, we can get from the 11 Mile river access all the way to Northfork in two days. Then we can spend Wednesday and Thursday doing the SNRA boundary down to Challis. If we're lucky and everything goes OK, that means we can head back home on Friday. We're keeping Friday open in case we need an additional day on the river. But we're hoping for a Friday return.

This trip will wrap up our Year 2010 field work for the river guide project. The BLM has already paid us $422 to cover expenses and the upcoming trip will probably yield another payment of maybe $300, plus or minus. That covers our costs of doing all this stuff. When our boating season ends at the end of this upcoming week, we will have logged at least 13 and maybe 14 days on the water in The Lynx. That's not too shabby. Sure beats zero days on the water!

As you might expect, today and tomorrow will be a couple of squirrely rigging days. Our lists of tasks is pretty daunting, as usual, mainly because of stuff like oil changes, tire rotations, etc. That stuff eats gobs of time. We're going to try to duplicate the previous trip wherein we didn't have to visit any stores. That calls for some really astute and complicated menu planning and ice management.
Oh, well, you know how it goes.

We sure are looking forward to being home for a longer time period. After this trip, we'll get to stay here perhaps as long as 10 days. That will be SOOO welcome! Only two more camping trips are on tap after this one and then our camping season will be over for the year. Hard to believe it went by in such a blink of an eye.