Cornfused by the blog title? It's Spanglish for the 1st of July.  July in Spanish is spelled "Julio" but it is pronounced "Who-lee-oh."  Got that?  We started of our Who-lee-oh with some fun acquisitions.  Remember the bicycle parking lot sale?  Well, we went back and scored two boat carts for $12.50 each.  The current low retail online for them is $160 plus shipping.  Now, we can tow around our canoe or kayak with ease.

We've realized that infamous bicycle is actually a karma gift.  Yep, as we roam around looking for stuff to restore the bicycle, we're stumbling into all sorts of unexpected gifts.  Yesterday, we were roaming thrift stores looking for dead bicycles when we happened upon a brand new Alfa 10 meat grinder for $5.50.  Then, to make matters more interesting, we quite literally stumbled on a fireplace set that included the elusive tongs we have sought for two years.  Price?  Two dollars.  When it dawned on me yesterday about the REAL role of the bicycle in our lives, I gleefully decided to cause yet more trouble with it.  I took apart the rear axle and laughed while watching all the little ball bearing BB's fall out onto the floor.  HA!  That will take FOREVER to fix!  And it will mean I have to roam hither and yon looking for esoteric stuff that will actually lead me into all sorts of important, coincidental acquisitions.  The military has this term called "collateral damage."  They drop a bomb and miss the target, oh, well, it's collateral damage.  Well, the bicycle is now causing Collateral Benefits!  It's kinda of the opposite of collateral damage.  I'm now so excited to see what goes wrong next with the bike I can hardly wait!  Who knew it would be this much fun?

We also dressed up in our nice go-to-work clothes and strapped on fire engine red suspenders and went out and visited all of the hotels and motels on the West Bank.  We checked on their supply of brochures and gave them our cell phone number and promised to keep them resupplied over the July 4th weekend.  Once the haughty front desk people realized I wasn't an itinerant huckster dressed in clown clothes but was actually a Parks Commissioner, they put on their nicey, smiley faces and a good time was had by all.

I saw one thing that made me LOL.  It was at the Super 8 motel.  They have a covered area for people to drive up to the office.  There's a HUGE sign facing oncoming traffic.  It says, "CAUTION LOW OVERHEAD."  Hum...I thought people already knew that about Super 8's.  Oh, well, I guess they need to be reminded.

Speaking of signs, I was really tempted to go act stupid at the local SHOPKO the other day.  They had this giant banner that screamed "HUGE PLANT SALE."  I was sorely tempted to stroll over with my dumb hick schtick act and ask to see the Huge Plants.  "You know, like, man, I've always wanted a Huge Plant for my apartment, man, you know what I mean?"  I mean like how often do Huge Plants go on sale, anyway, man?

Last night we fired up the new-to-us Coleman 413D and had some more sweet corn.  From igniting the stove to pulling out the succulent ears took less than 25 minutes start-to-finish--that 413D ROX!  It's HOT!

People are gearing up for all the festivities tomorrow.  People are also in a food shopping frenzy for their picnics and camping trips.  The groceries have been zoo scenes.  I saw one guy buying at least 20 large boxes of Ritz crackers PLUS at least 20 or more packages of hot dogs.  Good thing we're not invited to that picnic!

A local millionaire pays ba-zillions of dollars to stage our fireworks.  It's supposedly the largest show west of the Mississippi.  Who really knows if that's true?  Who cares?  Anyway, this year's show will have 16,000 shells.  That's sixteen thousand.  The finale will shoot off 1500 shells in a mere 70 seconds.  That's fifteen hundred just so you know I didn't make a typo or two.  The previous finales we have seen have been so truly amazing and awe-inspiring it's completely impossible to describe what it's like to see, hear and FEEL them.  This finale is supposed to be the biggest they've ever done here in Idaho Falls.  What these finales do is so surreal and so physical it defies your concept of normal July 4th reality.  They reach inside your being and shake you to your spiritual core.  The totality around you is pulsating with an explosive energy that reaches out and grabs some primal part of your being.  You are somehow transported into another dimension that can only exist in those few seconds of total mayhem and chaos of light and the fury of deafening, thunderous truly tsunamic sound waves.  When the finale ends, the tens of thousands of spectators (the crowd is usually estimated at over 50,000) stand completely transfixed for a few moments.  They are all suspended in the aftermath of the spectacular finale.  No one moves.  No one says anything. It's eerie and a tad spooky.  Then the spell is broken and normality returns.  People begin moving and chattering as they are wont to do and they go on about their lives.  I look forward to those 70 spectacular seconds when time stands still and my body vibrates with the shock waves of sound beaming down from the night sky about the Snake River.  If ever you have a chance to come to Idaho Falls for the July 4th fireworks, do it.  We've never seen anything like this show--it's as over the top as over the top can get. 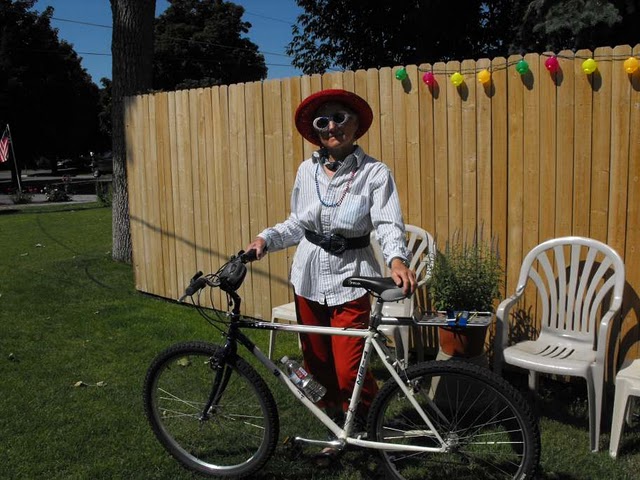 The other Big Deal of July 4th here is The Parade.  It's typically called simply "The Parade," as in THE Parade.  It's the biggest parade we've ever enjoyed.  It goes on seemingly forever.  All of the participants stage near the Idaho Falls High School (Tiger Nation).  Since IFHS is a mere six blocks from our house, we simply ride our bicycles over and pedal through the midst of the gathering participants.  No one minds.  For all they know we could be IN the parade.  In this way, we get to scout out the our choices for the "best of the parade."  This usually takes us the better part of an hour.  Around 9 am or thereabouts, the parade begins to take shape. All of the "handlers" begin routing the participants onto the parade route.  The bagpipes fire up, the Colonials fire off their muskets, the sirens begin to wail, the dance groups crank up their gyrations and the parade takes on a unique life of its own.  It's as if it's a creature unto itself--kind of a holistic, organic creation that's alive only for a few hours once a year.  Untold tens of thousands of people line the long route from the IFHS to Tautphaus Park.  You really wouldn't believe the mass of humanity along the parade route.  It really helps our minds understand that term "mass of humanity."  Every other year, one of the lead floats is filled with Japanese.  They are the visitors from our Sister City program.  They live in a small city about 90 miles from Tokyo.  You should see their glee, their smiles and their waves.  Their happiness at being in that parade is tangible and a pure delight to enjoy.  We look forward to seeing them tomorrow. The various High School cheerleader groups have an informal competition going on each year to see who can create the most unique and memorable performance. Most of the floats are quite animated--there are very few "static" displays.  So what we do is "key" on our favorites and then bicycle from one vantage point to another all along the route.  We've learned how to bob and weave and thread our fat tires through the gridlocked maze of the city to sneak into the best vantage points all along the route.  In this way, we get to enjoy our favorite floats and groups several times instead of just once.  It's great.

Throughout the day, all of the East Bank area along Memorial Drive is closed off to traffic and there are all sorts of fun activities going on there.  The bicycle is the only effective way to get around during the festivities.
We've learned that's how to get the best view of the fireworks.  The show starts at 10 pm.  We wait until about 9:35-9:40 before we take off on the bikes.  By that time, the city is completely gridlocked.  All traffic is at a standstill.  Nothing moves.  With a bike, we can "thread the needle" and ride right down to the best spot for the fireworks--we're practically standing directly underneath those aerial bombs.  Meanwhile, after the buzz of the finale wears off, we dash back on our bikes, often arriving 15-20 minutes later.  We've heard people complain it takes TWO hours to get home from the fireworks--the gridlock is truly that bad.  With bikes it's no problem!  (Note: the photo shows Susun in her July 4th "getup" from last year.  We can hardly wait to see what the 2010 outfit will look like!  Click here to see 41 photos from the 2009 parade.)

Well, it's time to do something besides mess with this blog.  Have a great day and Cheers, jp
Posted by John Parsons at 9:34 AM