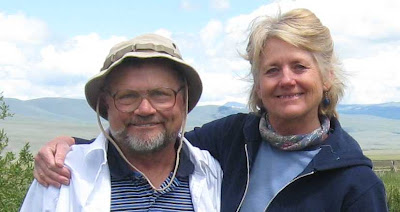 You're looking at two real Happy Campers shown at left.  We had a truly wonderful day up at Jerry & Carrie's ranch in Montana's Centennial Valley.  That gracious couple sure knew how to put and keep smiles on our faces all day.  They were Great and we want to give them a High Five and a Hearty THANK YOU!  Jerry's Dad moved to the area way back about 1920 after WWI.  Jerry grew up on the place and regaled us with stories of the Old West as it once was.  Today, Jerry and Carrie are running over 400 "pairs," which really translates to 800 animals.  A pair is a Momma Cow and her Calf. Jerry's a devotee of Alan Savory's Holistic Range Management and his six pastures are in awesome, healthy condition.  It was a cool (almost cold) brisk day under The Big Sky, as Montana calls itself.  The air was so clear that the distant mountains and ridges appeared so crisp we felt we could reach out and touch them.  Gentleman Jerry even allowed us to drive our own ATV for a tour of the ranch.  Gee, it's been 1991 since I last piloted one of them!  We enjoyed mingling with their herd and learning some of the details of their operation.  Susun, Carrie and I engaged in a spirited round of mildly extreme croquet.  Carrie won, but it was down to the last wicket for all of us.  Lunch was awesome--charcoal grilled, dry-aged, grassfed beef burgers with fresh, homemade potato salad and all the trimmings enjoyed on Adirondack chairs on the ranch house porch looking out into the vastness of the sweeping, iridescent green Valley.  The day was delightful in every way.  We left about 8 and returned about 4:30 pm.  Thanks, Carrie and Jerry for your down home hospitality, we really enjoyed ourselves.  We wish you the Best of Success and Many Happy Trails!  Cheers, J&S 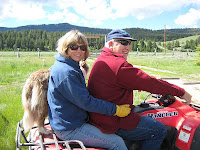 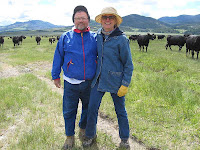 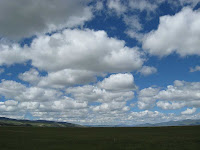 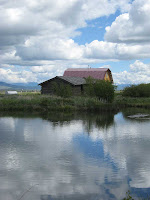 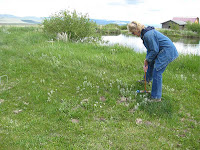 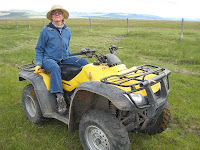