We're feeling much better this morning.  Somehow a wave of nostalgia washed ashore last night before the fireworks.  I picked up my Dad's book (published after he died) and commenced reading about Nuremberg.  I visited various online links that recount the incredible bombing from various perspectives.  I've always been very proud of my Dad but I sure was extra special proud last night!

I didn't leave home until 9:45 pm. That's cutting it pretty close.  As usual, the streets were deserted turning the city into a sort of suspended animation ghost town.  As I approached the most congested area, I had a sudden inspiration from way back in my days as an addicted football fan.  Some of you who watch a lot of football have undoubtedly heard a TV commentator talk about how any good running back needs to "follow their blockers."  Geeze, football fans, how many times have we heard that trite coaching advice?  For whatever reason, that phrase became my mantra last night:  "Follow your blockers, follow your blockers" rang incessantly in my head.  Luckily, I spotted three huge Latino gangbangers.  You've seen these types of dudes.  They are about was wide as they are tall and their weird clothes really say it all.  They are covered with tattoos and have shaved heads.  These three guys walked shoulder to shoulder and plowed forward just like an offensive middle line pushing back the defense.  Geeze, it was great, these three guys simply weren't going to alter their cruisin' style for anybody.  So, I settled back on my bicycle and "followed my blockers" tucking up right behind the wide bodies and, presto, in a wink of an eye I was delivered to my personal goal line--the John's Hole Gate.  That's as close as you can legally get to the fireworks.  My blockers helped me get into position precisely one minute before the first shell arched high above the twilight sheen of the Snake River.

The finale was even grander than the media had hyped it.  It was truly stunning and powerful and it brought tears to my eyes and a big lump in my throat.  It was easily the finest fireworks I've ever seen and may ever see--I'm not at all certain that finale could be topped.  When the spell of the finale wore off, I turned to find an escape route.  Getting TO the fireworks is only half of the equation.  Getting FROM the fireworks can be very problematic if one dilly dallies.  So, I turned to look for a route and luckily the "follow my blockers" worked once again.  Only this time is was Three Wide Women.  The three girlfriends had locked their arms together and they made this awesome flying wedge through the riptide of the departing crowd.  Their pace was brisk--perfect for a bike in low gear--and they synchronized their steps and off they went with Little Johnny behind.  The women made it easy to get to the first fairly wide open street and then I was off like a rocket and returned home a mere 15 minutes after the finale ended.  The whole start-to-finish, door-to-door episode was an hour and fifteen minutes.

The entire day was a lot of fun.  The parade, of course, always lives up to its hype.  Afterwards we visited both Farmers Markets.  In the afternoon we enjoyed cycling through the big hoopla down along the East Bank.  We even squeezed in a couple of Honey Do projects, too.  The weather cooperated nicely, warming to just above 70 with a light breeze.  Our bicycles got a stout workout yesterday, that's for sure. 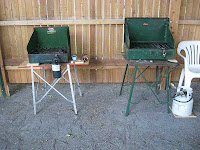 I finished the pre-fireworks evening by setting up what I am calling "The Green Brothers, a Coleman Duet."
Jeff and Suzanne are coming over for a Holiday Breakfast at 9 am this morning.  We've planned  a real nice camp-style repast and will cook most of it outdoors beside the picnic table.  It's been a real good idea to remove camp-related babbling from this blog.  Sometimes, I can't help myself and I simply have to sit down and write on and on and ON about something related to camping.  No longer will it clutter up this blog--it has a place of its own.  I think I've put up maybe 7 posts simply about Coleman stoves.  Now that's OCD if I ever heard of OCD!  All of that stuff resides at camptip.blogspot.com.  Be careful, reading that material can cause brainfreeze!  Oh, yeah, the other thing I did was buff a griddle.  Oh, nevermind.