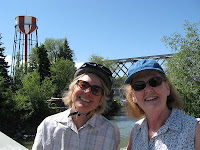 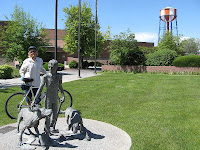 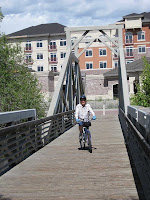 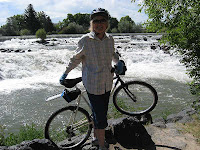 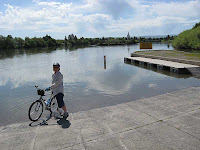 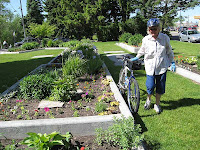 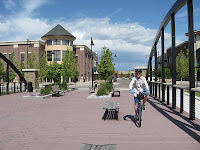 It's hard to believe that we haven't been on our bicycles here in Idaho this year until today.  Our travel schedule, the weather and what not have prevented us from enjoying one of the great benefits of this city--it's bike-ability.  We were out for almost 2 hours and roamed all of our favorite haunts, drifting through the historic numbered streets, Kate Curley Park, the deserted downtown and all up and down and around the Greenbelt paths.  There was no one at the John's Hole boat ramps.  The resident geese outnumbered the people near The Falls.   The Falls themselves are in great shape--the water is almost clear again so it's pure white when it tumbles over the basalts.  We even ran into one of Susun's fine friends, Rachel.  I hadn't met Rachel until today so that was a real treat--she's fun.  We checked on Hilda's garden, went out on the pier at Snake River Landing, paid homage to the Eagles and then rubbed the noses of Billy, Dan and Ann at the public library.   The trio is famous for their roles in "Where The Red Fern Grows."  Wilson Rawls wrote the book when he lived here in Idaho Falls at 551 11th St. about a block from our house on 12th Street.
All-in-all it was a great inaugural bike ride for Y2Ten.  The bikes themselves performed great.  I gave them a little tune up last night.  They are ready to go but won't get ridden again until we return from the Dubois Road Trip.

looks like fun, there is something about riding a bike that makes me feel like a kid!!