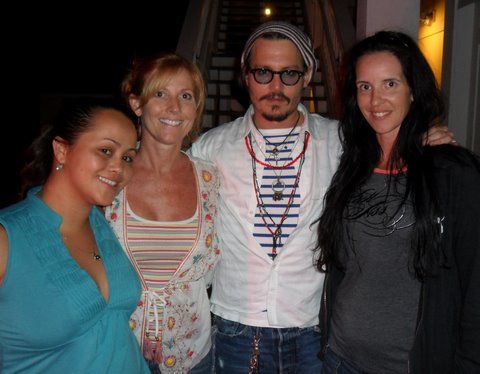 Yes, the above picture is real. It has NOT been "Photoshopped." That's Dear Daughter and LBR Stasea Rae standing beside Johnny Depp. THE Johnny Depp. Stasea sent this photo at 3 am Monday morning (Idaho Time). WAY TO GO, STASEA!!!

Here's the story. Stasea received a hot tip that Depp was on Kauai at a certain restaurant. Stasea and two of her girlfriends went over and hung out near the obvious limo caravan near that restaurant. When Depp came out of the eatery, they asked him for a photo and he obliged--gracefully. As the women stepped forward for the photo, Depp said the angle of light wasn't quite right and asked them to move to a different area for the photo. Stasea said she got to stand next to Depp "because it was MY camera!" After someone took the picture, Depp shook each of their hands and then clasped his own hands in prayer and faced each woman and gave them a little bow of his head and a prayer for each. How cool is that? Very cool.

Thanks for sending the photo, Stasea, and thanks for your three comments on the blog that accompanied the photo. You get a Gold Star on your LBR chart today. It was a great way to wake up after a few hours sleep. Keep those awesome surprises coming.
Posted by John Parsons at 7:21 AM

I am SO jealous.

All I can say is EVERYONE is that photo is HOT! Who would have guessed. Nice to know it's not photoshopped. Lucky Stasea and friends. And Lucky Johnny Depp to meet these lovely three women.

BIG SMILE!! I was hoping to make the blog
with that!! It really was cool!! Thanks John
and thanks for the compliment fellow LBRs
Aloha

The missus hollered out loud when I showed her that pic of stasea with the Deppster. There are so few of us men who affect the wimmin' folks that way.