Baking in the rain 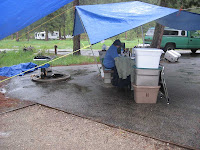 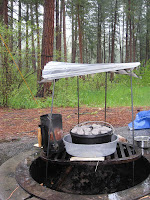 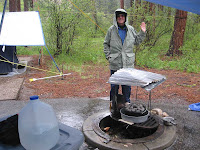 As campers know, doing ANYTHING in the rain is a real camp chore, let alone BAKING in the rain. Baking something in the rain definitely qualifies as a "tough nut to crack." We had two big breakthroughs on this last camping trip and both of them involved dutch oven baking. As LBRs know, we've been fiddling with our dutch ovens recently to attempt to bake a new portion size with a new technique. At first during this most recent camping trip, I was chagrined by the incessant rainfall. How could we bake in the rain? Finally, the light blubs went off and I figured out a truly effective way to bake in the rain. The photos are pretty self-explanatory. What was once the campfire chimney now became the tin roof of our camp kitchen bakery. The whole setup worked to perfection. We did the cornbread shown first, a ground turkey meatloaf second and scalloped potatoes and ham third. Each recipe turned out perfect. The portion size was exactly right for two people. There was no waste. Best yet, there's NO clean up of the dutch oven. You simply pull out the non-stick baking pan, remove the coals, let the oven cool down, oil it and put it away. It's as simple as it can get. Meanwhile, cleaning the non-stick 8x8 baking pan is a snap--you can wipe it out with a wet paper towel and you're done. The whole rig fits in a four gallon milk crate.

The other big breakthrough involves temperature monitoring of the dutch oven. This was a huge breakthrough and one we will use forever for the rest of our camping lives. Way back in December 2009, I bought an expensive infrared, laser, non-contact thermometer at Harbor Freight in Mesa, Arizona. I had no clue what to do with it so it sat in its original plastic package for months. I even took it back to Arizona in March-April but never took it out of its plastic package. It simply sat in my workshop unused and, apparently unloved. I finally thought of a reason to use it to monitor the surface temperature of Baumgartner Hot Springs so I threw it unopened into our camp rig. Meanwhile, after arriving at Baumgartner, I lost interest in learning the surface temperature of the hot springs. So, the high tech temperature gun sat once again unused and unloved.

It was only after making the tin roof for the camp bakery that the light bulbs went off. BAM, as Emeril would say, I KNEW precisely why I had this high tech tool. I hurriedly cut open the package and whipped the gun into action. Sure enough, I aimed at the side of the dutch oven and pulled the trigger and BAM--it read out the temperature of the oven, 380 and climbing fast! I pointed the red laser dot at all four sides of the oven and kept monitoring the temperature until it rose to 450. Then, I pulled off some coals and was pleased to see the temperature return to a nice cozy 390-400 degrees--perfect for cornbread. Using the temp gun gave me total control over the oven temperature. We perfected its usage on the turkey meatloaf and the scalloped potato dish. We were able to establish and maintain a 350 and a 325 oven perfectly!!!! Oh, what fun are these high tech toyz! Cheers, jp (Click the small photos to see large versions.) 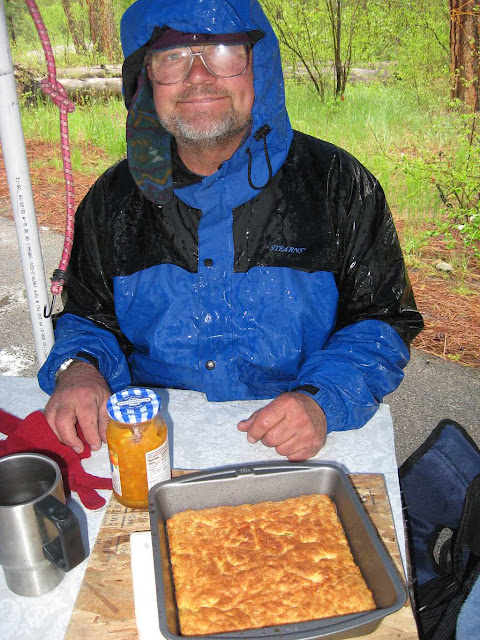 Infrared thermometers are definitely a unique, sometime limited use tool. But totally cool too. I find myself measuring all kinds of stuff with mine. In fact, just last week I learned that the vaulted ceiling in our living room was getting a surface temperature of 102 degrees up high! No wonder our living room is always so hot...