Rain on the plain

Been raining most of the night and 'tis still rainin' early this morning.  It seems like more rain than it really is.  We've rec'd maybe .15 of an inch.  Temps are in the mid-40's so it qualifies as a cold spring rain.  Chilly!

We were supposed to go take pictures of the proposed art bench sites along the greenbelt yesterday but the Rain said NO. We rescheduled for this morning and once again the Rain is saying NO.

Susun's Dog Sitting this week so she shuttles back and forth between here and Connie's place. Connie had a big pile of flat travertine pieces sitting in front of her house. Two years ago she offered the pile to Susun for $100. We declined. Two years later the price dropped to $40 and we bought it. Yesterday, Susun transported the whole big pile and Susun actually laid down the rocks to make a nice looking rock pathway in the courtyard. I didn't lift a finger--it was all her doing. She was justifiably quite proud of herself for this major one-woman task. It looks real nice and, after the rain stops, I will take a photo and post it here.

I took our tarp down to Rachel's place and she quoted me $20 to reinforce both ends of the middle seam. Thanks, Rachel! She's even going to get it done before we leave Friday. She's sewing a big patch of cordura with big Ol' "D" rings on each end. Now, I will be able to really put some tension on the ridgeline of that tarp.

We spent a bunch of time out at Office Max trying to tweak our "visual aids" for the gubmint interview forms. Hopefully, we will make it even easier for the people to participate and also shorten the total time the interview seems to take.

Hey, here's a "keeping an appointment" story. After Office Max, I went over to Freddie. I picked up some items and was deep in the back of the store when my intuition said to leave the store immediately without buying anything. So, I put everything back, including the bananas, and hurriedly walked out of the store. Just as I arrived at the stop sign in front of the store, someone honked loudly and long at me. It was Bill and Joyce from Dubois! They pulled over and we had a nice 15-minute visit right there in front of the store. I'd been thinking a lot about them lately--they are such sweet and wonderful people. It was so great to see them. Joyce has been in the hospital but she is obviously out and looking good. Bill's his same old self. Even though they are nearing their 80's (or maybe IN their 80's), you should see the love that couple shares. Sometimes they look like teenagers! Getting to meet and know them is one of my great gifts from that job. Bill was manager of the Dubois Senior Center for years before petty small town politics prompted him to step back into private life once again. I sure love it when Ye Ol' Intuition speaks to me that clearly. How often do I go into a grocery and NOT buy anything? Not very often.

Hey, believe it or not, I got the chain saw fired up and it runs great. Amazing!
We might take it along on this trip. 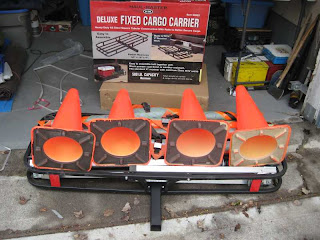 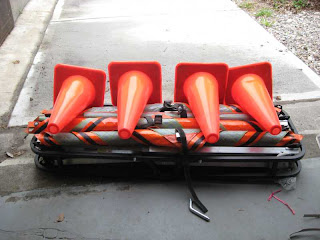 We put together the rear rack and tested how well the NVUM signs and cones fit into it. It appears the rack was designed for the NVUM stuff--it all fits like a hand in glove. It sure is going to simplify our rigging. The Camp Warehouse is now organized and clean and we are pecking away at our "to do" list for the next trip. Only about 48 hours left until we boogie out of here once again. Gotta "chipaway" until we can become a Chippewa!
Posted by John Parsons at 6:39 AM

It does look like the rain in spain may be mainly on the campground as snowfall, possibly. I may even have to get my neighbor to cover my entire garden on Saturday night because there are tomatoes, peppers, eggplants, spuds, squash and all manner of tender little morsels that could freeze even in little ole Boise.So, I guess we'll just need a big ole campfire, hot chocolate with some good alchohol to go with.