WOW--So, here is the story. We have had XM Radio since May 4, 2004. That's a whisker over six years--an eternity in The Techno World. We've been voracious XM fans, enjoying so many of their channels in so many far flung places and spaces. We figured how to get XM in campgrounds in canyons, in Bowery Guard Station--you name it, we had our XM groove. And then one day, the music died. It was maybe 4-5-6 months ago, who knows? It happened at a time when I didn't have time to "deal with it." I think the music died down on our first trip to Arizona. As LRBs know, there wasn't a spare minute for anything other than Top Priority Stuff (TPS) back in those days. 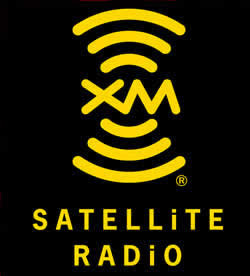 Well, Susun had become somewhat dependent on XM's connection to CNN News and other audio news outlets she loves. Susun is quite the News Girl. Most people don't know that about Susun. She's really on top of the news. She's a purebred Newshound! If she's deprived of NPR or CNN or whatever, she goes into pretty major withdrawal, somewhat similar to DHDS, only worse.

She had been leaving me subtle hints for awhile to make XM a TPS gig. I had been a slacker, oh, such a slacker. But I could hear the XM issue bubbling louder in the background with each passing day. I found our XM account information and I was preparing to call over to India and figure out "whazzup with XM." But in my heart I knew it wasn't their problem--it was OUR problem. But I didn't know WHAT was our problem--only a vague intuition that it was OUR problem, not theirs.

I rushed around the house and found the right parts and within minutes I had the XM signal beaming back into our space! WOW! By chance, I dialed in Channel 7--The 70's Music and who should it be but Bob Segar belting out "Hollywood Nights." It was perfect and it even made me a wee bit emotional. WOW--We got our XM groove back--the Music LIVES!  We broke into a wild Hollywood dance routine and Susun and I rocked around the kitchen.  She even said, "Wow, John, you can DANCE!"  And, then, as if on cue, her favorite artist came up--Sade.  How good is that?  VERY good!

"She stood there bright as the sun on that california coast
He was a midwestern boy on his own
She looked at him with those soft eyes,
So innocent and blue..."

Ok, I gotta know...what was the issue?

Music IS the soundtrack of our lives.