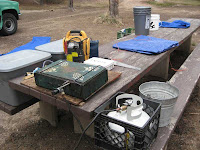 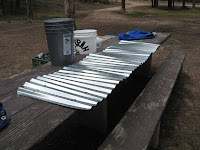 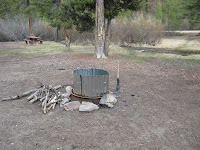 This year's evolution of what we're calling the campfire chimney has been a Shinning Star in our repertoire of camping gear. As LBRs know, it started out of frustration with the evening winds in Arizona. I scavenged a rusted piece of ancient roofing metal and cobbled together something to let us continue to have evening campfires.

We realized that this improvised device would allow is to enjoy fires with winds up to 30 mph. Over 30 mph and things get ugly so why bother? Anything up to 20 mph is downright casual. Between 20 and 30 it usually starts gusting badly and it's generally more fun to hang out in the windproof house.

The next incarnation of the chimney took place soon after we arrived back in Idaho Falls. We bought a shiny new piece of 8-foot roofing metal from Lowe's and made a nice chimney for our courtyard. LBRs remember the nice brick bottom and the guy wire supports and so forth. Since this chimney is behind an 8-foot fence, the fire is double-buffered. Hence, we can enjoy a fire in our backyard while the wind is literally howling and rocking the fence and flipping semis out on I-15.

Both of these chimneys got us to thinking about how maybe such a critter could enhance our camping gig. So, I dutifully bought yet another 8-foot of metal at Lowe's and set about improving on the design. First, I carefully ground down all the sharp edges and used aviation snips to round all the corners. Then we drilled 12 quarter-inch holes for each of the four 2-foot pieces. That's a total of 48-holes. Two of the pieces got an extra four holes each so that actually makes 56 holes. Then we bought twice the amount of nuts and bolts we would expect to use. Why buy so many bolts? Well, campers drop nuts and bolts into the deep dust of a campsite. Campers who spend too long digging in the dirt for lost nuts and bolts are NOT Happy Campers. If you buy twice as many nuts and bolts as you need, that means you can lose half of your nuts and bolts and still be OK. LBRs who camp will understand those mathematics.

Next, I tested the assembly of the chimney here at home. Naturally, some of the holes didn't match so new ones were drilled to make sure any Village Idiot could assembly it easily. Then I went off and bought a 10-foot stick of 3/8th inch rebar. I cut this into 3 equal pieces and make stakes to hold down the chimney. It would be a bummer of a high wind flipped the chimney and made it take off and run into a neighboring campsite. Yeah, real bummer.

Finally, I dedicated a new tarp to the chimney and carefully wrapped all the pieces in the tarp so that all edges were covered by a double layer of the tarp. Next, this package was tied up like a Christmas package and it was good to go.

At camp, we had a large group-sized picnic table at least 16 feet long maybe 20.
So, I was able to lay out all of the pieces and carefully size them for the Forest Service fire ring. (That's the reason for the many holes. Campfire rings come in a variety of diameters. With so many holes, the chimney cam be sized for the prevailing fire ring diameter.)

Viola, the campfire chimney fit like a hand in glove with the fire ring at the Five Points Campground. It performed flawlessly. It's a gem. It's a keeper. It's awesome. We love it. We're never going camping again without it. It puts out so much more warmth than a regular campfire. It's so much safer. It's easier to light. It's easier to tend. There's less smoke. The fire burns hotter, longer. You can turn your back on the fire for extended periods without worrying about it. Plus, as an added bonus, it would be much more difficult to actually fall INTO the fire. Addicted campers know that falling into a fire came be an ever present danger on the far back side of Happy Hour. Falling into a campfire is not a good thing. The chimney effectively precludes that option. It's a "campfire fall preventer" for stability-challenged campers. There's no downsides that we can think of. It lies flat when packed into the truck and has no affect on how we rig the gear. It doesn't weigh enough to be a factor in the gear rigging. The cost, including nuts and bolts, is less than $20. What's not to like about it? Nothing.

The campfire chimney is definitely the New Star of the Show. Farrah was a hot item when she first appeared on the scene about 10 years ago. She still gets rave reviews from first time users. But she's over a whole decade old. It was high time something innovative came along to take the heat off Farrah. (No pun intended, of course.) Sooner or later, (It's only a matter of time) Susun will come up with a name for the chimney. Heaven only knows what the name will be but I can guarantee you, a name is forthcoming. Any suggestions? 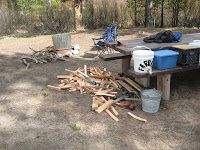 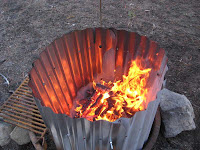 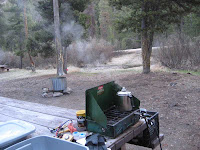 That chimmney sounds great! So when are you going to market it so places like Bass Pro can sell it for $80-100? I'm hoping it's not windy enough to need it this week in Holbrook...guess we'll see!