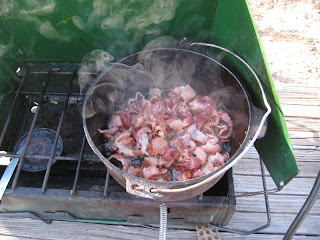 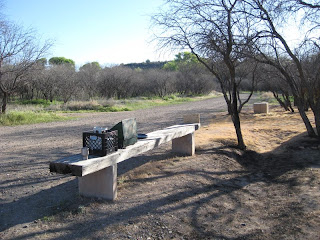 Yeah, I admit it. I'm a sinner. I love bacon. Yessiree! Sign me up! We don't eat bacon that often cuz we know it's "bad for us." But, once in awhile, I just HAVE to have some bacon. There's nothing else on God's Planet to compare to bacon. As far as we're concerned, it's the best part of the Noble Pig.

We actually do have rules about the cooking of bacon. It MUST be done outside. It can't be cooked inside. There's too much grease splatter and the bacon smell lingers forever inside the house. Nope, it's gotta be cooked outside. Second, it has to be served with eggs, preferably really GOOD eggs like Gary & Robin's fresh eggs. That's really all there is to it. Set up the camp stove and have at it. 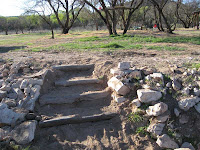 The smell of bacon in the morning is genuine aroma therapy. When someone else is cooking it and I am not, it drives me nuts. There's some olfactory thing about bacon that triggers primal urges. Maybe it goes back to our caveman days not all that long ago, say the 1980's. Who knows?

Meanwhile, I took a photo of the new steps. It's kind of like trail work only it benefits us and not some unseen members of the public. I love working with rocks, rebar and junipers!
Posted by John Parsons at 8:59 AM