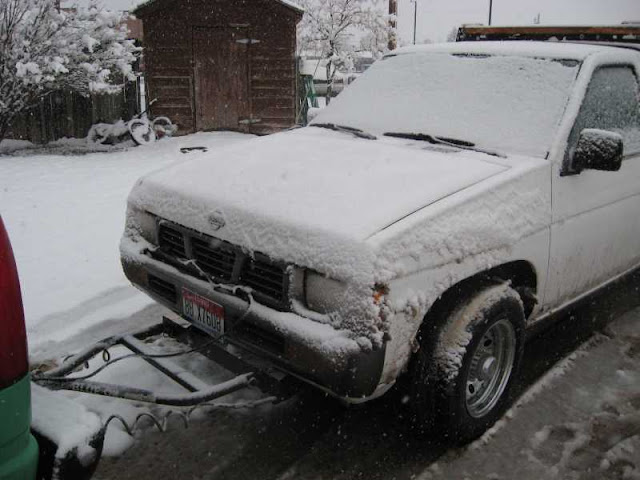 Snappy's gotta be a little grumpy tonight! We're watching local TV here in Fillmore--actually the local TV is from Salt Lake, Cedar City and St. George. Get this--Beaver got 13 inches of snow! WOW--that's only 60 miles from Fillmore. We are so danged glad we didn't go there. THANK YOU, Mr. Freely for helping us out today. AWESOME!

(Edited later in the evening) It's after 8 pm and still snowing hard. NWS Doppler radar shows NOTHING here but I can tell you it's snowing HARD here. If this keeps up, we're gonna be here another night--no doubt about it.

It's funny, the Salt Lake Metroplex was mostly dry. We had some light rain here and there but nothing significant. It was dry in Nephi, too. Only when we got about 20-30 miles south of Nephi did it turn terrible. We passed three rollovers within a half mile at Mile Post 206 and then saw another two rollovers at Milepost 196. We were almost the first on teh scene at the 196 rollovers. Luckily, a tow truck driver was first and he was helping the injured out of their vehicles. We kept on driving as our double rig would have created a problem if we tried to park it beside the road.

Visibility had generally been about 5 miles but started dropping rapidly as we progressed south. It soon became a mile and then a half mile and finally a few hundred yards. The snow started swirling and I could feel a slight loss of traction on the freezing road surface. That's when we decided to "bag it" and head for safety in Fillmore.
Posted by John Parsons at 5:59 PM