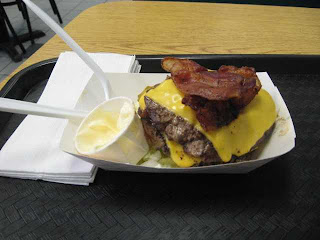 I had no idea that Idaho's Panhandle is on a different time than the rest of us in Idaho.  This area up here is on Pacific Time.  The rest of us are on Mountain Time.  That means they say it's 6 pm right now but it's really 7 pm for me.  I don't like time warps, especially silly tricks like this one.  Oh, I think I know why they do it--it's because they all shop in. But still, it's irksome. 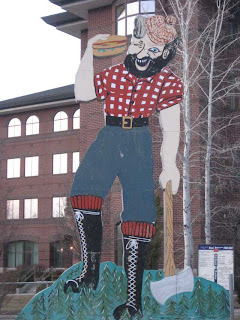 I copped a second break from the resort.  They say you get 2 free hours of WIFI.  So, I used only about 10 minutes, thinking I could log on tonight and use the remainder of the 2 hours.  HA!  When I tried to log on, the machine said I had used my once a day allotment of free time.  I tried feeding it a credit card--no luck.  So I called the front desk and they said they would call me back.  By and by they called and said, well, check the back of the drawer and you will find an ethernet cable.  Plug it in and you're good to go for free for as much time as you care to use!  How 'bout that?

I really enjoyed my hike.  It was a real hike--not a walk.  The trail had a lots of tread roughness, it was muddy as heck and slippery, too.  It went up and down and around and even had a suspension bridge.  Based on my walking pace and time it was on the high side of 2 miles. Very popular trail.  Very scenic and very non-urban.  I hope to post some more stuff about it.  I wore only a flannel shirt and my summer hat.  By the end of the hike, I was getting a wee bit chilled.  I went and put on a jacket and a warm hat and went out looking for El Cheap-O Greasy Spoon.  I found it in the Paul Bunyan burger joint.  In spades.  As the Tweets note, I got a double bacon cheeseburger--two patties--with a LOT of veggies and sauces for $2.11 total.  The place was tended by 2 high school girls.  I told the one at the register that I didn't want the hamburger bun so they piled it all into a french fry paper thingie.  There was even 4 pieces of bacon. Yeah, I know it's like a million milligrams of cholesterol but, hey, at least it was virtually no carbs.  Anyway, it was about a half mile from the resort so I fast walked back here to the Tower, hoping some of that gutbomb would kinda, sorta settle somehow. 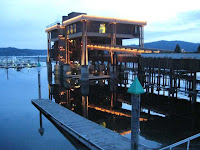 There a huge fireplace down in the lobby.  It's a gas log affair, of course, but it's huge.  The flame size is probably 3 feet, easily, maybe more.  BIG flames!  I'd guess the fireplace is 8 foot square and it's surrounded by cushy resort chairs.  Tonight, that whole area is filled with young VISTA's.  It was great to walk past and see the glow of the fire on their idealistic young faces as they chatted eagerly with each other.  VISTA is a really cool program--Thanks Gawd it exists and Thank Gawd Obama supports it so much.

This resort is owned by somebody who I would guess to be the equivalent of  "JR" on that old TV series, "Dallas."  Everywhere you look, his last name--Hegeboom--or something like that--is plastered everywhere.  His corporate HQ is out in the lake water and has boat slips underneath it.  Very obscenely wealthy.

I have to do some technical stuff with the computer right now so will return later.  Bye, bye...jp

OK--I'm BAAACK!  I had to go download Irfanview onto this netbook so I could process my photos.  Now that we have Irfanview installed on this thing, we will post up a BUNCH of photos!  Uh, huh!
Posted by John Parsons at 7:20 PM