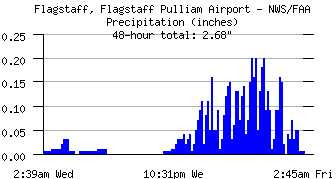 The Verde gauge stopped putting out cfs flows but it still producing height readings. It appears to be topping out around 22.5 feet. This flow is probably someplace in the 120,000 range. A reading of 21.75 feet roughly equates to 110,000 cfs. The peak flow as February 20 1993 at 145,000 so the Verde isn't going to come close to the prog of 180K. -Still, this would one of the highest flows ever seen for the Verde. Yesterday is was running perhaps 700 cfs.

The Salt River into Roosevelt is nearly 80,000 right now and rising rapidly--roughly 7000 cfs every 30 minutes. It's 1993 peak was double this flow so I seriously doubt that what's upstream can come close to helping break the record.

The Upper Verde has (so far) dodged a bullet. It doesn't appear that there has been any kind of a "wave" of water coming off the Rim. Unless it is going to appear very soon, everyone's prog's might just have been wrong about this portion of the river. That's VERY good news. The clock is ticking on that wall of water supposedly coming off the rimlands. The next few hours will tell the tale.

All-in-all is was bad, very bad, but not as truly terrible as it could have been. Even if the Salt rallies a lot higher, it's not flowing through populated territory.

Take a look at the Flagstaff precipitation graph above.  It clearly shows that is is tapering off right now.  It's nowhere as intense as it was earlier.  ALthough the winter storm warning there continues until noon Saturday and as much as 2 feet of new snow is expected, we can say theya re getting abreak from the incessant snowfall.  The remainder of Friday might well be a different tale but I'd have to say they are "out of the woods" from the bulk of this storm.