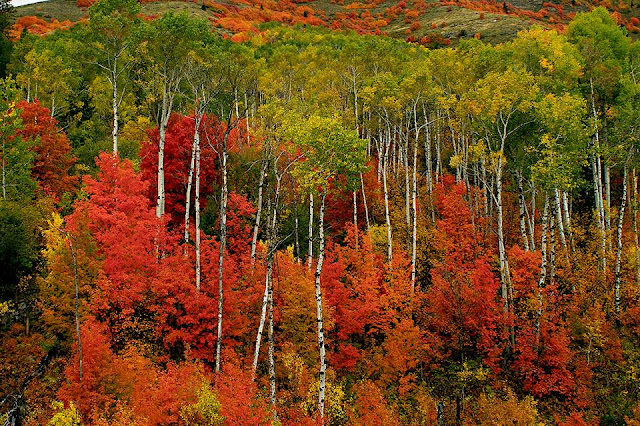 Time for a change! Time to transition to Fall.  Time to think ahead. LET'S GO!

"Change" has been our watch word lately.  We've been going through more changes than the Monarch Butterfly's chrysalis.

We've sold off more of our Boy Toys than we ever dreamed possible.  We've just been in Total Potlatch Mode for what seems like ever since we got back from Waterton-Glacier.  Every day I get up and it's like Ground Hog Day.  I sell stuff.  I list stuff and I sell stuff.  Some days I have half-expected a rodent to come out of my stuff and bite the hand that feeds it.

But that's been my deja vu for daze and days.  Sell Stuff.  Keep Selling Stuff.  Then sell more stuff.  And, oh, did I say SELL STUFF?  Geezsus, it's been a chore!

But it's time to stop.  It's time to transition.  Fall is hot on our heels, so to speak.  Back when we were newbies here in Eastern Idaho, we often got fooled by the hot late August temps, thinking such temps would forestall fall.  HAHAHA!

The footsteps of fall listen to a drum beat of their own.  When those footsteps begin to fall upon your forest floor, all those "in the know" nod and smile and share their LOVE OF FALL!

And so it is that even though we are mired in the midst of yet another relentless California High Pressure Ridge, the inexorable Idaho Fall Marches ON!

We are go grateful to live here and be a part of this magical place.
Posted by John Parsons at 7:02 PM

John, you have done a remarkable job. .selling many emotion connected memories with nary a whimper. Proud of you ..Thank you.