A week does wonders

Susun has made a great recovery from her oral surgery a week ago today.  She hasn't eaten any solid food since last Thursday and won't be able to for quite awhile yet.  She's become an expert on smoothies and soup, including such esoteric soup as buttermilk and spinach or how about peanut butter banana?  Last night she pureed some cauliflower into something resembling mashed potatoes and reported it was quite good.  She's adapted quite well to this dietary regime.  She's buoyant as ever and appears none the worse for the wear.  Muy kudos to her resilience.

As usual, Susun's leading a busy lifestyle here in Idaho Falls.  Yesterday she spent a good portion of the morning taking semi-formal portrait photos of her friend Shirley's daughters and grandchildren.  The pictures are easily as good as anything a professional could have captured.

As for Little Yonni?  Well, he spent most all of yesterday bird-dogging estimates on various repairs to the Nissan.  You see, we learned Wednesday that the radiator has developed a leak necessitating its replacement.  The radiator is plastic and can't be repaired with super glue or JB Weld.  This development engendered a whole string of unintended consequences.  To keep and repair?  Or to sell and shift gears?  Aye, that was the question.  For sage advice, we turn to the Cornville's own version of Click and Clack, none other than The Goatherder himself.  GH pulled in his turban and helped play Swami in the equation.  After snagging various cost estimates and swapping notes with GH, the answer is in.  We're keeping Snappy and will happily invest in repairs to extend her lifetime for at least 5 more years.

You may not have noticed but the used vehicle market has gone nuts-so in the last year or two.  New vehicle prices are so high that they have trickled far down the vehicle food chain, affecting even vehicles in the 10-15-20 year age range.  It's phenomenal.  Take this example:  We paid $5000 for the Big Chevy (AKA: Annie) 10 years ago at a Forest Service auction in Cedar City, Utah.  We could sell the truck today for at least what we paid for it!  If we sold Snappy for perhaps $1500-$2000, plus the cost of repairs we plan to do ($1000-$1500), what could we get?  After roaming hundreds of Craigs List ads plus at least 200 KSL listings, we concluded that $3500 would buy nothing even remotely as good as what we already have.  So, she's a keeper--Snappy will continue serving yeoman duty in our household well into the foreseeable future.

Time once again for a water report.  Yellowstone Falls moved into the #2 all time peak flow position yesterday when it went above 9170 cfs.  It may have peaked this morning at 9300 cfs.  There's no way it will take out the 1997 #1 position of 9950 cfs but it's a real feat to capture the #2 position.  The 1997 peak was an anomaly.  There was a huge amount of snow and it flash melted in mid-June.  So, this year's flow is actually the #1 overall peak for a normal spring-summer runoff season. Records have been kept for 87 years so it's a big deal to capture the #2 spot. 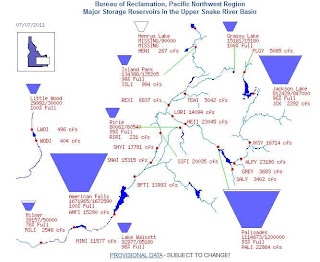 Meanwhile, water managers are playing cat and mouse with Jackson Lake and Palisades Reservoirs.  As you can see from what's called the BuRec "teacup diagram," both behemoth water bodies are danged near full while over 23,000 cfs pours through Snake River Canyon.  So, the BuRec has once again cranked up the Palisades release and there close to 23,000 cfs coursing through downtown Idaho Falls.  Although it's a far cry from the peak of 31000+ cfs recorded back in June, it's still quite a show for this late in the season.   The Salmon River below Stanley is running about 4000 cfs and the Middle Fork is almost 5 feet on it's gage.  We've been thinking about maybe boating a portion of the Salmon between Yankee Fork and Torrey's Hole but unless the water drops significantly in the next two weeks that now looks highly unlikely.  Remember the old adage: "You can't get in trouble in a river if you don't get in the water."

As usual, our hollyhocks are going gangbusters.  A lot of people consider them a weed here but we get more compliments on our hollyhocks each year than anything else associated with this property, garden or otherwise.  They are a delight and passersby of all stripes love them.  Today, we recorded our first three blossoms.  For the next few weeks, the blossoms will be popping like crazy and will put on their annual colorful show.  Hollyhocks are the easiest plant to grow we've ever experience.  They couldn't care less about 40 below temperatures and they are already greened up and ready to grow when we return from Arizona each year.  Maybe Buddy Holly could have done a rock and roll tune "Hock Around The Clock."
We planted some peas, corn, squash and sunflowers on the lee side of the hollyhocks.  The hocks provide late afternoon shade for the other plants so they don't get scorched during the hottest part of the day.  We planted the corn "Hopi-style" and it appears to be doing well.  The sunflowers are coming along nicely, the squash is yet unmolested by pests and the peas are flowering.  All-in-all, it's a tidy little urban garden and makes us both smile each day.

Create yet another wonderful day with Many Cheers, jp 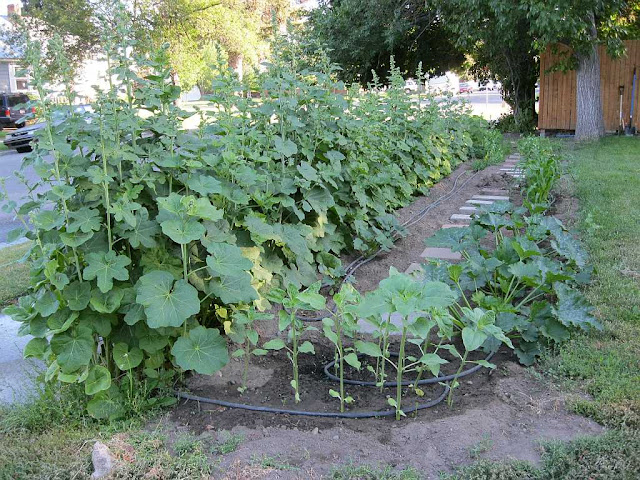 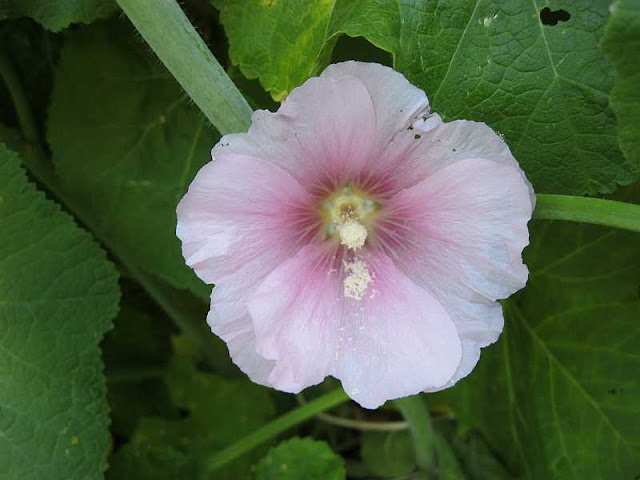 pretty..wish those grew in hawaii!!