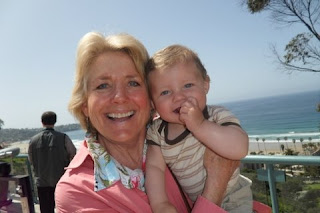 It's 5:15 am as I begin to write this post. The moon will be full in about an hour and we'll be on the road in less than two hours. Time sometimes feels like a swift river to me. I've been on a bunch of swift rivers in various kayaks, canoes and rafts. Heck, I've swam (not on purpose) in some swift rivers, too. There's a peculiar feeling about being carried along by the current. Sometimes that's what time feels like--a river current. It's so powerful, so relentless. As a river marches toward the sea, the sea of time marches forward to the future.

Stasea sent this photo overnight of Susun and Grandson Van over in San Diego during her March trip. Thanks, Stasea.

Yea, I got my first Social Security check in the overnight electronic bank-to-bank mail! Happy Day.

Looks like we're driving into a storm yet again. Lake affect snow is expected in Salt Lake tomorrow and it's gonna be COLD! Gee, I can hardly wait to drive through SLC tomorrow. Oh, well, we have to expect weird weather when we are traveling.

Gotta git goin'. Coffee's almost done. A few more snippets before we pack up the laptop--then we're switching again to Twitter. I moved it back to the top, as you can see at left. No Tweets for 40 days and 40 nights.

(Added @ 6:30 am--gotta power this thing down now.  Keep an eye on the Twitter box at left.  Will send updates from time to time.  We're easily on track to pull outta here on time @ 7 am.  Whew, I could almost feel the moon going full a few minutes ago.  Probably my imagination.  Nice to know it's past now!  Happy Trails & Cheers!)
Posted by John Parsons at 6:24 AM

Good Luck on your travels! I hope you have a safe journey and look forward to reading about it. It was great to see you last weekend!

I finally turned on my real computer to read your blog in full screen! Great reading...glad you're home safe and sound!! Hugs to you both!!
Stasea..